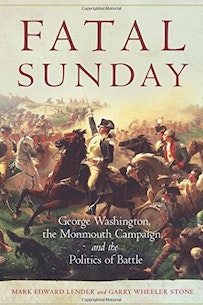 Purchase the book from University of Oklahoma Press.

On an exceedingly hot day 239 years ago, General George Washington met British General Sir Henry Clinton on the battlefield at Monmouth Courthouse in New Jersey. Upon leaving their winter encampment at Valley Forge, the Continental Army tracked the British north as they abandoned Philadelphia for New York. Washington wanted to attack, but his generals, including Major General Charles Lee, advised caution during a Council of War on June 24th.

Seeking a victory to boost his reformed army’s morale, Washington needed to prove himself a capable Commander in Chief. During the Valley Forge encampment, doubts had been raised about his ability to lead the army. New intelligence spurred Washington into action on June 25th and the fighting commenced on June 28th, a Sunday morning. When the day-long battle ended in a tactical draw, the Continental Army slept in the field and awoke the next morning to the British gone and the battlefield theirs.

This week’s featured book, Fatal Sunday: George Washington, the Monmouth Campaign, and the Politics of Battle, offers an exhaustive play-by-play of the days and hours leading up to the pivotal battle and its outcome. While focusing extensively on the communication breakdown between Washington and Lee, the authors conclude that the Battle of Monmouth was a critical moment for the Commander in Chief and ushered in the downfall of Charles Lee.

The following excerpt offers a glimpse into the aftermath of battle, detailing the gruesome and solemn task left to the victors of burying the dead and counting the wounded.

The onerous work of clearing the Monmouth battlefield began even before Washington marched toward the Hudson. The Americans had won a gory field. Men lay where they had fallen, some of them horribly mutilated by bayonet and saber wounds, musket fire, and all manner of artillery projectiles. Most bodies were bloated in the heat, some with their face almost black. Scattered among the dead, the wounded awaited help, some dying before it arrived. “I Viewed the field of Battle,” Shreve wrote his wife, "where many British Grenadier[s] and Light Infantry Lay Weltering in their Gore.” Lieutenant Colonel Samuel Smith, with Richard Parker’s battalion of picked men, was aghast at what he found that Monday. "The stench from the woods was intolerable," he recalled, "they being filled with dead men and horses." If the apparent victory was sweet, there were soldiers who appreciated its grim cost. One French volunteer, "even in the midst of the pride and pleasure of victory," took no comfort in surveying the enemy dead. Massachusetts surgeon Samuel Adams, Jr.–son of the Samuel Adams–visited the field on the twenty-ninth and found it "shocking.” Certainly, the sight of the hundreds of slain must have sobered all but the most callous; Monmouth had been a bloody piece of work.

It was not all blood and gore, though. The Americans dealt easily with most enemy prisoners of war and deserters. There were relatively few of the former. Standing mostly on the defensive, patriots had few opportunities to make captures. John Laurens thought a lack of cavalry prevented the rebels from taking "but a very inconsiderable number of prisoners." Most British falling into rebel hands probably were stragglers or those wounded to badly to get away. Of the 60 or so men taken during the battle, the wounded left at Freehold and on the field accounted for the majority. The rebels had taken another 70 or so prisoners along the British march to Monmouth Court House (including the grenadiers caught doing their laundry), and the few taken during the enemy movement to Sandy Hook brought the total to no more than 150 prisoners, if that many. Some were sent to Princeton, but most went to the Trenton "gaol,” where they were held prior to exchange or transfer to locations in the Philadelphia area. There were many more deserters–some estimates stated as many as a thousand over the course of the campaign. Roughly half of them were sent to Philadelphia; the others seem to have disappeared into the New Jersey and Pennsylvania interiors. Rebel authorities cleared British prisoners and deserters, wherever their destinations, from the area quickly. This was important. Prisoners and other extraneous personnel are a burden to an army on the march; at the least they require security and rations, sometimes even transport and medical care, all of which can slow a force on the move. Washington's army never labored under this impediment as it moved out of Monmouth County.

The dead and wounded posed more difficult challenges, although the army dealt with them quickly. On the twenty-ninth patriot search parties swept the woods, fields, and bogs looking for anyone, friend or foe, dead or alive. The dead would be buried and counted for official reports, the wounded cared for if possible. It was a grisly undertaking. Colonel James Chambers, who had seen some of his own Pennsylvanians killed and wounded during the cannonade, rode over the field to find "our fatigue parties collecting the dead in piles." Lieutenant Colonel Cornelius Van Dyck of the First New York was in charge of the body count. He divided the two hundred-man work party into thirteen groups, each group laboring in the hot and now stinking air under an officer or sergeant and assisted by "Different Inhabitants." A Connecticut sergeant wrote of the grim labor, "our next order of business was to gather the dead together in order to bury them which we did going about in wagons, loading them up..., and burying about twelve or fourteen in [a] whole." Over the course of the day, the detail recovered and buried 217 British and twenty-nine American bodies. Other officers thought this count was low, stating that patriots buried closer to sixty of their own.

Whatever the exact figure, the bodies of enlisted soldiers went into common burial pits. This happened without ceremony, without official or public remembrance. If anyone said a prayer or stood for a solemn moment, it was unrecorded-and unexpected. This was fully in accord with the socially accepted norms of the period: the anonymity of the common grave simply (if brutally) reflected popular attitudes toward the lower-class origins of most rank and file. Any grieving among surviving comrades in arms was done privately. This may seem heartless today, but there are no indications anyone thought so at the time.

It was different for fallen officers, though. Commissioned ranks were generally the military counterparts of the social betters in civilian life. As historian Caroline Cox has reminded us, Continental officers were men with aspirations to traditional "gentlemanly honor"; it was this sense of officers as gentlemen the army relied on to "maintain the distinctions of rank under all circumstances." These distinctions held in such matters as living conditions, training, furlough opportunities, and even funerary arrangements. Whenever possible, officers received individual interments With some formal observance–the "honors of war." It was a practice Washington fully approved, and so it was after Monmouth. In general orders of the twenty-ninth, the commander in chief informed the army: "The Officers of the American Army are to be buried With military honors due to men who have nobly fought and died in the Cause of Liberty and their Country."

The Continental Line lost eight officers at Monmouth, just over 11 percent of the patriots killed in action. In their accounts of the battle, officers frequently mentioned their dead comrades by name and recalled the circumstances of their deaths, and there was some genuine mourning. Captain Walter Finney, Tenth Pennsylvania, wrote that American losses were "inconcedarable" except for the "brave officers that fell like Romans" (which begs the question of how the enlisted men fell). Officer fatalities left Lieutenant William Watson deeply affected. Watson had fought under Colonel Livingston at the Hedgerow and may well have seen Major Edmund Dickinson fall. "We have lost a Number of Brave officers," he wrote home to Massachusetts, "Some of Whitch I had a Perticular Aquaintance and Regaurd for thay are dead But May thair Memories and Virtues Be Imbalmed With My Tears and Still Live in the Chambers of my Hart." Watson's letter reveals him to be a ferocious hater of slackers in the cause; he despised "them and all their Spitefull Things as the Scarlett Whore & I know of no Whore that tryes more to Corrupt the Earth with thair Fornications than those of that Denomination." But his affection for his brother officers was as deep as his loathing of his enemies. There is no similar account of tears shed over enlisted dead, so the gulf between officers and men remained as wide in death as it was in life.

The ghastly death of artillery lieutenant James McNair, who lost his head to a British cannonball, evoked a response similar to Watson's. The event moved "Pericles" to a heartfelt and archetypical republican tribute. Laced with the classical elusions so dear to whigs, the eulogy bore echoes of the famed Athenian's "Funeral Oration." "Tears like the dew shall fall on the memory of Heroes," the pseudonymous Pericles grieved. The author was certainly a brother officer, as he wrote of McNair with intimate detail. The lieutenant was loved by the officers and "loved and feared" by the enlisted men. "He was cool, attentive to his duty, intrepid and brave, undisturbed by the hottest engagement, and commanded with the firmness and courage of a Roman." McNair had "died fighting bravely for his country against slavery and tyranny. Not less than a cannon ball separated his noble soul from his body." The emotional distress of Pericles was genuine, and his lament reflects the self-image of an officer corps that saw itself as the Revolution's pillars of courage, sacrifice, and honor. The army rendered honors accordingly: On the twenty-ninth Marylander Colonel Otho Holland Williams informed a friend that while writing his letter he could hear the "volleys that are discharged over the gallant Dead."