Eyewitness Images from the American Revolution 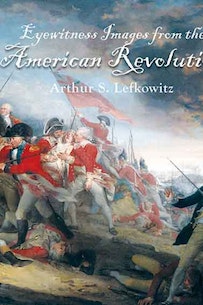 Eyewitness Images from the American Revolution by Arthur Lefkowitz

Purchase the book from Bookshop.org.

In his book Eyewitness Images from the American Revolution, Arthur S. Lefkowitz has gathered over 50 paintings, drawings, and engravings by soldiers, sailors, officers and artists who worked from first-hand knowledge of the events. Richly illustrated with many rarely-reproduced works of art, Eyewitness Images also tells the stories of the artists behind the works, introducing many less-celebrated figures of the war and revealing some of their methods for creating art amidst the dangers of war.

The following passage describes the formation of a partnership between two Connecticut artisans, the New Haven silversmith Amos Doolittle and his portrait-artist neighbor Ralph Earl, in their creation of four views of the first Battle of the Revolutionary War, the Battle of Lexington and Concord, which occurred on April 19, 1775.

Doolittle was twenty-years-old at the time and interested in using his engraving skill to make prints of maps, music scores, historical events, and portraits of famous men. It was a good idea but Doolittle was not an artist and he needed someone to make line drawings which was the first step in printmaking. New Haven had only one resident artist at the time named Ralph Earl (1751-1801) who earned his living painting portraits of local people. Earl was a talented, self-taught artist who settled in small but prosperous New Haven as he lacked the art training to compete in larger cities like Boston and Philadelphia.

Doolittle approached Earl in early 1775 with an offer to pay him to produce line drawings for his painting venture. Earl was painting with oil colors and had no experience using only lines drawn with a pencil to create light and shadows, shapes and textures but he knew someone who did: his artist friend Henry Pelham in Boston. Pelham was not only engraving and printing but creating the original line drawings. He agreed to show Earl how to make drawings for printmaking. Earl went to Boston in March 1775 and lingered in the city to work with Pelham and study the paintings of the brilliant Boston artist John Singleton Copley, including his portrait of Samuel Adams which was on display in Hancock’s mansion.

Boston was a precarious place at the time with the city under British martial law following the Boston Tea Party. However, Earl probably discreetly approved of conditions in [the] city since he was a Loyalist and opposed men like Samuel Adams and John Hancock who called themselves Patriots but he viewed them as traitors.

Under Capt. Arnold’s command, the Guards drilled frequently on New Haven’s village green as hostilities increased against what the Patriots called Parliament’s “junto of courtiers and the pimps and parasites” sent from London to enforce martial law in Boston.

Rumors began to circulate in New Haven in mid-April 1775 that British Redcoats had fought Massachusetts militia in the countryside near Boston. The reports were confirmed when a horseman galloped into New Haven on April 21, carrying a dispatch from the Massachusetts Committee of Safety with the electrifying news that the militia had turned-out to fight British troops in a running battle on April 19 along the sixteen-mile road between Boston and the village of Concord.”

The day-long battle was being called the Lexington Alarm.

Capt. Arnold promptly ordered the Guards to assembly and fifty of them, including Doolittle voted to join the other militia companies marching from all over New England towards Boston. The insurgents, calling themselves the Provincial Army of Observation established their headquarters in Cambridge, near Boston. The Guards left New Haven on April 24 and marched into Cambridge on April 29, ten days after the start of the war. The rebel camp was buzzing with stories of the Lexington Alarm just a few miles away.

Being so close to the scene of the fighting, Doolittle got the idea of producing a set of prints showing the highlights of the action to promote the patriot cause and launch his print business. Doolittle got permission f[rom] Capt. Arnold to take several days to make an excursion to the places where the fighting had taken place. Doolittle needed Earl to make the drawings for his prints and for and fortunately the artist was in nearby Boston. 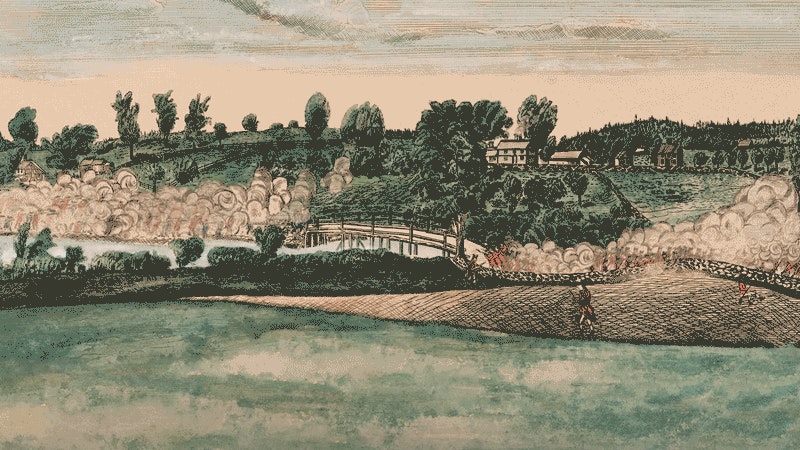 This engraving of Amos Doolittle's "The engagement at the North Bridge in Concord, 1775" is a focal point of our gallery dedicated to the Battles of Lexington and Concord.

Doolittle contracted Earl who managed to get out of the beleaguered city which was now surrounded by the rebels. They teamed-up and travelled into the countryside for several days talking to eyewitnesses to the events and stopping for Earl to make accurate drawings of the terrain including buildings, fences, and trees. The rudimentary images in Doolittle’s prints are a mystery sine Earl was an accomplished artist. The probable explanation is that Earl made some preliminary drawings on-the-spot without proper equipment such as sharp pencils or an easel. He returned to Boston after giving Doolittle his crude drawings which Doolittle used to make his prints. Doolittle later acknowledged that Earl drew the pictures recalling that he “…acted as a kind of model for Mr. Earl to make his drawings, so that when he wished to represent one of the Provincials as loading his gun, crouching behind a stone wall when firing on the enemy, he would require Mr. D. to put himself in such a position.

Doolittle returned home from Cambridge in late May 1775. Back in his New Haven workshop, Doolittle created four engravings of key events based on Earl’s drawings and eyewitness accounts. The original Doolittle prints were first advertised for sale in the December 13, 1775 issue of the Connecticut Journal newspaper:

This day published and to be sold at the store of Mr. James Lockwood, near the College [Yale], in New-Haven, Four different views of the Battles of Lexington, Concord, etc. on the 19th of April 1775….The above four plates are neatly engraven [sic] on Copper from original Paintings Taken on the Spot. Price Six Shillings per Set for the Plain Ones, or Eight Shillings Colored.

The long delay from the time that Doolittle returned to New Haven to the availability of the prints is another mystery. A plausible explanation is that the paper, ink and copper plates that Doolittle needed were in short supply during the war and it took him time to acquire the materials