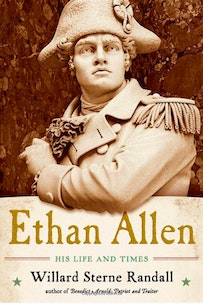 Ethan Allen: His Life and Times by Willard Sterne Randall

In the storm-tossed hours since midnight, only two waterlogged workboats had managed to cross the narrow neck of wind-whipped Lake Champlain. Just eighty-nine of Ethan Allen’s Green Mountain Boys had been able to get from the tree-shrouded shore of Vermont to the steep protuberance of New York less than a mile away. Now the protective darkness was fading as a white morning fog cast a faint glow on the massing rebels. Soon that would burn off, exposing Allen’s amateur assault force to British sentinels patrolling Fort Ticonderoga’s looming ramparts. All night, Allen had waited for more commandeered vessels to arrive, for more of the two thousand men he’d promised he could muster for the attack, but by five o’clock on the morning of May 10, he realized he could wait no longer. Without even the two hundred chosen men waiting to join him from their hiding place behind a screen of spruces on the Vermont shore, he would have to assault the most formidable British forces in the American colonies.

Only two weeks earlier the shocking news had reached Ethan Allen that the first shots of the American Revolution had been fired. Reports wrapped in rumors of massacre had spread like a crown fire over the forests and mountains of New England. Initially, few details could be confirmed, but at least one conclusion was indisputable: on April 19, 1775, in a deadly clash of arms between Massachusetts militia and British regulars in the outskirts of Boston, a decade of ideological ferment and partisan protests over England’s fumbling attempts to formulate imperial policies had finally turned into an open rebellion.

The announcement of the birth of United States at Lexington and Concord quickly reached the thousands of transplanted New Englanders on the Vermont frontier. From the minutemen on the village green of Henry Wadsworth Longfellow’s Lexington to Ralph Waldo Emerson’s ‘shot heard round the world’ at the ‘rude bridge that arched the flood’ in Concord, the strands of patriotic embroidery were already being laced from town to town by the volunteer couriers of Massachusetts’ revolutionary movement.

Acrid blue clouds of musket smoke still hung over the bayoneted corpses of the Revolution’s first casualties when the Massachusetts Provincial Congress, in hiding in Watertown, summoned its most trusted courier, twenty-three-year-old Israel Bissell, and handed him a single document. Bissell was to ride west first to Springfield, on the Connecticut River, then south as far as New York City, spreading the news of the British invasion. At every town, he was to obtain the counter-signature of the chairman of the Committee of Safety to this missive:

To all friends of American liberty: let it be known that this morning before break of day a British brigade consisting of about 1000 or 1200 men landed at Phips farm at Cambridge and marched to Lexington where they found a company of our colony militia in arms, upon whom they fired without any provocation and killed six men and wounded four others. By an express from Boston we find another brigade are now upon their march from Boston supposed to be about 1,000. The bearer, Israel Bissell, is charged to alarm the country, and all persons are desired to furnish him with fresh horses, as they may be needed. I have spoken to several who have seen the dead and wounded…

On the afternoon of April 30, less than a week after Ethan Allen had first been informed of the carnage outside Boston, three mud-spattered riders galloped up to the Catamount Tavern, the unofficial capitol of pre-revolutionary Vermont, with an answer. Inside, their muskets slouched against the walls of the tavern’s main room, a few score Green Mountain Boys were laughing and sipping on tankards of the house specialty, Stonewall, a potent punch made of hard cider laced with rum. Heman Allen, a successful Connecticut merchant, a captain in the Boys, and Ethan’s partner in Vermont’s leading land company, shouldered his way through the entrance, marked by a crudely lettered sign, ‘Council Room.’ There he found his one-year-older brother, resplendent in his calf-length, forest green, gold-epauletted colonel commandant’s uniform huddling with his fellow officers. Heman had ridden all night over slippery roads with Captains Edward Mott and Noah Phelps, veterans of the French and Indian War, to bring Ethan a commission and orders from Hartford. Indeed, as he had proposed, the Boys were to attack the Lake Champlain forts and speed their precious cannon toward Boston. Heman gave the hushed crowd more details of the heavy fighting. For the first time, many of the Boys learned that the makeshift New England army would be helpless to withstand a British counterattack without state-of-the-art artillery.

Consequently, Heman told his brother that Massachusetts and Connecticut Patriot leaders were commissioning him a colonel in the Connecticut militia and placing him in command of the Green Mountain Boys. They were to seize the cannon in two of the king’s forts on the New York shore, at Fort Ticonderoga and at Fort Amherst, twelve miles north at Crown Point. Ethan Allen could have refused to carry out a treasonous invasion of one British province, New York, on the dubious authority of an illegal assemblage of rebels from two other provinces not even sanctioned by a divided Continental Congress. But Allen needed little prodding. He later wrote in his 1779 memoir that his selection for the mission ‘thoroughly electrified’ him. ‘Ever since I arrived to a state of manhood, I have felt a sincere passion for liberty.’ The blood shed at Lexington and Concord was to him the first ‘systematical and bloody attempt’ by the British to ‘enslave America’ and made him determined to risk a traitor’s death, fully realizing that to accept Connecticut’s commission to attack the king’s forts was a blatant act of treason under English law.