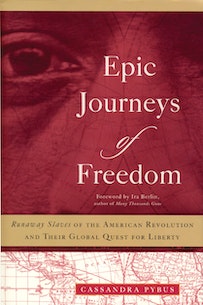 Epic Journeys of Freedom: Runaway Slaves of the American Revolution and Their Global Quest for Liberty by Cassandra Pybus

Enslaved African Americans in North America found themselves in an unusual situation during the War for American Independence. The new American Republic touted liberty and freedom, but this did not extend to all members of society. Cassandra Pybus personalizes the wartime stories of black men and women who fled their American masters to seek freedom, and traces their footsteps around the globe.

Scipio Handley was a self-employed black fish seller in Charleston when he was caught carrying messages for the embattled royal governor of South Carolina, Sir William Campbell, late in 1775. As far as the rebellious colonists were concerned, Handley's capture was clear evidence that the British were set upon undermining the social order in the slave colony. Campbell had been regarded with deep suspicion from the moment he had stepped ashore in Charleston in June that year, rumored to be bringing a huge cache of arms to inspire a slave uprising against them. Six months later, incendiary stories of a British-inspired insurrection continued to percolate through the white population...

While waiting execution in the Charleston jail, he was smuggled a file to sever his iron manacles, he jumped two stories from his cell window and escaped to Sullivan's Island, a small area in Charleston Harbor under the control of British warships. On Sullivan's Island he joined a small community of runaways sheltering in flimsy huts they had thrown together from found materials. For months enslaved people in Charleston had been absorbing the mounting hysteria about British intentions and impending war. They knew that the English army had landed in Massachusetts and was preparing to do battle with their masters, and that there had been fighting in the backcountry between the Patriot and Loyalist militia. When word of Dunmore's proclamation freeing those prepared to bear arms for the king reached Charleston, the British ships in Charleston Harbor were transformed into a symbol of hope. Those who sought refuge with the British took a calculated risk, under no illusions about the cruel death they might expect should they be caught.

William Ashe though the risk was worth taking when he ran to Sullivan's Island with his infant daughter, Esther, both enslaved to the same man in Charleston, in order to effect a reunion with his wife, Mary, who had been sold far away to the Indian Lands. In the turmoil caused by the fratricidal fighting in the backcountry she had managed to escape. Ashe was a slave mason, one of the large number of enslaved artisans hired out to work in Charleston, who consequently enjoyed a relative degree of autonomy and freedom from surveillance. The same may have been true for the black carpenter Isaac Anderson, a single man in his early twenties who had taken refuge on the island in December 1775. Years later in New York, when Anderson was asked to account for himself, he claimed to have been a 'born free man in the house of Robert Lindsay,' which implied that he, like Scipio Handley, belonged to the free black population in Charleston. However, Anderson was born in Angola, as he later admitted. He must have come to America in a shipment of slaves and almost certainly he was the property of either Robert Lindsey, a wealthy Charleston slave owner, or Robert Lindsay, a free black man in the city who also owned slaves. Like Ashe, he had seized the opportunity of an alliance with the British to emancipate himself from bondage.

The presence of a fugitive slave community in the middle of Charleston Harbor was seen as a grave threat. South Carolina's elder statesman Henry Laurens, chairman of the Committee of Safety, complained bitterly to the British naval commander about harboring 'negroes who fly from their masters' and actively encouraging these fugitives to make armed raids of plantations along the seacoast. Profoundly shaken by the subversive specter of the camp of runaways on Sullivan's Island, Laurens authorized a dawn raid on the island on December 18, 1775. 54 men disguised as Indians burned the shelters of the runaways, killed three or four, and captured another four. Laurens regretted the loss of life, but he ordered the attack in the hope that it would serve to 'mortify his Lordship... [and] humble our Negroes in general.' Certainly the incident convinced Governor Campbell that he had better quit South Carolina until he had an army to reinforce his authority. He sailed out of Charleston Harbor on January 6, 1776. With him went a small number of runaways, including Scipio Handley, the Ashe family, and Isaac Anderson.

Campbell sailed north to Cape Fear, in North Carolina, to rendezvous with the British commander in the region, Major-General Henry Clinton, who had arrived from Boston in February with twenty British warships and several troop transports. Even before this fleet arrived, runaways were defecting to the British commander at the mouth of the Cape Fear River, near the town of Wilmington. This was a region where enslaved people enjoyed an unusual degree of mobility and freedom, working as carpenters, dock workers, or loggers in the pine forests. When the British warship began to bombard Wilmington in February 1776, the fearful white residents were evacuated inland and the town was left almost entirely to its enslaved workforce.

Thomas Peters was a Yoraba man in his thirties who had been imported from Africa fifteen years before. At first he was a laborer on a sugarcane plantation in French Louisiana, and he still carried the marks of whippings and branding inflicted on him for his unsuccessful escapes from a brutal master. He was eventually sold to an immigrant Scot who went to live in Wilmington in 1770. It was here that Peters found a degree of autonomy, dignity, and self-reliance. He was a millwright, probably hired out to one of the timber mills and permitted to find lodging separate from his owner where he could live with his wife, Sally, and their five-year-old daughter, Clairy. This small measure of independence was not enough for Peters, given that he, his wife, and his child were still defined as property and could be disposed of at will. As soon as his Patriot master fled Wilmington in March 1776, Peters took his family aboard a British warship in the Cape Fear River. Taking the same desperate gamble was John Provey, who, like Peters, enjoyed a high degree of autonomy as the valet of a lawyer in Wilmington.

When General Clinton arrived at Cape Fear, he was more than pleased to find about 50 black refugees on board the ships, and he promptly appointed a marine captain as the commanding officer of a specially commissioned black company. As Thomas Peters remembered, he was inducted into a noncombat company called the Black Pioneers, swearing a formal oath that he entered the king's service 'without the least compulsion or persuasion' and would 'cheerfully obey all such directions as [he] might receive.' In return for service, the Black Pioneers were 'regularly supplied with provisions and decently clothed,' as were their families. The Black Pioneers came from as far afield as South Carolina and even Georgia. They received rations and the same pay as regular soldiers, a sixpence a day. Clinton insisted that all his officers treat the black soldiers with 'tenderness and humanity,' and he promised that when the rebellion was over they 'shall be entitled (as far as depends on me) to their freedom.'" Peters clearly displayed the qualities that would later make him leader of the black community, since he was made a sergeant and served in that capacity till the end of the war. John Provey, who had been a gentleman's servant rather than a manual worker, was seconded to work for Clinton's secretary.

By July 1776, the British fleet was still off Cape Fear, where it was joined by the exiled governors of South Carolina, North Carolina, Georgia, and Maryland. Morale was at a low ebb after the abject failure of Clinton's ill-judged assault on Charleston in June. With British disasters up and down the Atlantic seaboard, it must have seemed to Isaac Anderson and Thomas Peters that the gamble they took in defecting to the king's men would turn out badly. Their fortune seemed to have reached a nadir when the fleet was joined by the governor of Virginia, with his disheartened refugees. However, two weeks later they arrived at Staten Island, where they were greatly heartened to find that an army of 9,000 troops had come from Nova Scotia under General Howe, as well as another 10,000 Hessian mercenaries from Germany. The British forces were now almost 30,000, all primed and ready to take New York from George Washington's Continental army."