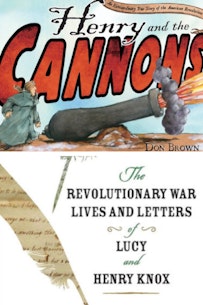 Henry and the Cannons: An Extraordinary True Story of the American Revolution by Don Brown

This season, we prepare to brave the long winter ahead by finding creative ways to keep spirits bright for ourselves and others however we can. While we stay warm and safe at home this year, we might choose to reach out to friends and family with a handwritten card, letter, or virtual Zoom invitation to gather around and share stories. In December 1775, Henry Knox, a Massachusetts bookseller who joined the New England troops encircling British-held Boston shortly after the shots heard in Lexington and Concord, faced some of the same challenges and found inspiration to stay the course! In Henry and the Cannons: An Extraordinary True Story of the American Revolution, author and illustrator Don Brown offers an adventure story for young readers, ages 5-9, to follow along with Knox’s journey from Fort Ticonderoga, N.Y., to Boston, Mass., at each twist and turn. Brown’s watercolor scenes are inspired by real places, artworks, and documents.

Looking to history for action-packed stories and holiday cheer, Henry Knox’s winter story reminds us to keep in touch with the people who matter most.

Excerpt: Henry and the Cannons

Henry Knox said he could do it.

Knox was a Boston bookseller who’d taught himself soldiering from some of the very books he sold. In spite of a plump shape that suggested a man who preferred a good meal to a good fight, he was an eager Patriot who was sure he could bring the cannons to Boston.

General Washington believed Henry and ordered him to Fort Ticonderoga. Covering forty miles a day for a week of hard riding on horseback, he was rain soaked, windblown, and frozen. The trip was nothing like selling books.

It would be the easiest part of his adventure.

What challenges did Henry Knox face before and after this story that winter? Did he ever feel homesick? How did he become a bookseller? If readers young and old ask what happens next to Henry, we recommend The Revolutionary War Lives and Letters of Lucy and Henry Knox, an edited volume by historian Phillip Hamilton. Henry wrote many letters to his wife, Lucy Flucker Knox, during his travels. With essays and edited transcription of surviving correspondence from the Gilder Lehrman Collection, Hamilton also includes a map of places referenced by the young couple during Revolutionary War.

What does reading aloud from this letter add to how we imagine the world of Henry and the Cannons? Hamilton includes the letter below in a chapter on “The Excitement of War (April 1775 – June 1776).” Here, Henry tells Lucy, whom he had married in June 1774, about his adventure across the ice… but still expresses a wish to see more snow.

Excerpt: The Revolutionary War Lives and Letters of Lucy and Henry Knox

It is now twelve days since I’ve had the least opportunity of writing to her who I value more than life itself. How does my charmer? Is she in health & in spirits? I trust in God she is. My last Letter mention'd that I was just going of Lake George about 36 miles in length. We had a tedious time of it altho the passage was fine, in coming back it was exceedingly disagreable. But all danger and the principal difficulty is now past &, by next Thursday, I hope we shall be able to set out from hence on our way home with our very valuable & precious Convoy. If we have the good fortune to have snow, I hope to have the pleasure to see my dearest in three weeks from this date. Don't grieve my dear at its length. I wish to heaven it was [in my] power to shorten the time, a time already elaps'd far beyond the bearance of an eager expectation to see you. We shall cut no small figure in going thro' the county with our Cannon, Mortars &c - drawn by eighty Yoke Oxen.

I have not had an Unwell hour since I left you. My brother Wm is also exceedingly well & has been of the utmost service to me. I most fervently wish that my dear dear Lucy might have been equally happy with respect to her health. Had I the power to transport myself to you, how eagerly rapid would be my flight. It makes me smile to think how I should look, like a tennis ball bow'ld down.… Give my love to my friend Harry. I certainly should have written to him, but every minute of my time is taken up in forwarding the important Business I'm up[on]…. I have had the pleasure of seeing a considerable number of our enemies prisoners to the Bravery of America, Enemies who would not before this allow the Americans a spark of military virtue. Their note is now chang'd. Some are to be much pitied, others are not so much. All in a degree. Their infatuation is surprising, but trust will have its end. May he who holds the hearts of all flesh in his hands incline America[ns] to put their sole confidence in him & then he will still continue to be their Leader & may he condescend to take particular care & give special directions to your Guardian Angell Concerning You

Adieu My only Love
for the present Adieu
H Knox

Historian Phillip Hamilton, Professor in the Department of History at Christopher Newport University, writes about Henry and Lucy Knox's letters and this collection's significance to scholars:

… Lucy and Henry wrote about their decisions and actions, as well as about the many people they met and interacted with. The couple also share their hopes and fears about the war with each other throughout its entire length. But the Knoxes provide other perspectives on the American Revolution. In contrast to John and Abigail Adams, for instance, Henry and Lucy allow us to peer into the workings of the Continental army, with correspondence about its leaders, daily operations, and key battles. Lucy Flucker Knox, moreover, belonged to an important Loyalist family. Soon after the war commenced, her father, mother, and sisters left for England, whereupon they cut off all contact with Lucy. Consequently, she endured now only an absent husband who was often in harm’s way, but also what she viewed as abandonment by her family.

The Knoxes’ letters, above all, permit us to see two young individuals maturing amid a momentous war, while also learning to understand and work with a partner whom they deeply loved. Only 24 and 18 years old, respectively, at the time of Lexington and Concord, they had been married less than a year, had no children, as yet, had little direction in their future together. Throughout the war, they each faced considerable challenges and dangers, which forced them to leave their youth behind and enter mature adulthood. Therefore, when the war ended, Henry and Lucy were significantly changed, both as individuals and as a married couple.

Like all couples separated by circumstances, they corresponded for many reasons. First and foremost, they wished to express their love and friendship for each other and to share their daily activities. They penned letters to discuss the course of the war and give voice to their concerns for each other’s safety. They sometimes wrote to articulate their loyalty to the new nation and express their hopes for its future. Lastly, the Knoxes used letters to impose order on the seemingly chaotic day-to-day events then occurring around them and sympathize with their respective plights. Hence their correspondence explores many facets of life during the American Revolution, and readers will gain important insights into the many transformations that reshaped late eighteenth-century America, as well as have a better grasp of the dynamic interplay between the public and private spheres of wartime life.

The 104 letters collected and reproduced in this volume (75 by Henry and 29 by Lucy) are all from the Gilder Lehrman Collection. The couple exchanged well over 200 epistles during the Revolutionary War, and approximately 150 have survived. Not surprisingly, many of their letters were lost, due to the confusions and upheavals of the war itself. This is particularly the case regarding Lucy’s correspondence. Because Knox generally received his wife’s letters while in the field, a number of them were misplaced or disappeared amid the bustle and dangers of active campaigning. All of her surviving wartime correspondence is included in this book. Henry’s letters in the volume were selected not only because of the important issues they raise, but also due to their direct engagement with Lucy’s experiences and feelings.