Digging in the City of Brotherly Love 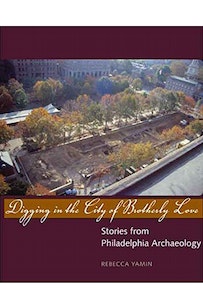 Digging in the City of Brotherly Love: Stories from Philadelphia Archaeology by Rebecca Yamin

Archaeology helps historians better understand the people of the past. In her book, Digging in the City of Brotherly Love, Rebecca Yamin uses archaeological investigations to look at Philadelphians between the 17th and 19th centuries. While she does mention prominent historical figures, she focuses on the forgotten. Through these excavations, archaeologists enhance what the written record tells us. Who knew so much could be learned by going through someone’s trash?

In 2001, before the construction of a new pavilion to house the Liberty Bell began, an excavation of the grounds at Sixth and Market Streets was begun. On what had been the site of Robert Morris’s 1767 house (later known as the President’s House), Yamin and her team found something that couldn’t be identified. Clues in a 19th-century insurance policy led to Robert Morris’s correspondence with George Washington which suggested an explanation.

Only the very back portion of the lot fell within the project area, but on it was a curious feature unlike any other found in Philadelphia. It was made of stone blocks apparently arranged in the shape of an octagon. The octagon measured thirteen feet in diameter, way too big for a well and of unlikely construction for a privy or cesspool. A small excavation inside the feature produced nothing but fill with no artifacts, and in consultation with the Park Service we decided to have the backhoe remove the rest of the fill in the hope that the feature's function would become obvious once its walls were exposed.

The shaft was constructed of unmortared blocks of schist. It reached a depth of nine feet before ending in a gravel "floor." There was no concentration of artifacts at the bottom or in the fill that might suggest the function of the feature, and we were as mystified when it proved empty as we had been when it was first uncovered. We didn’t know whether it had been built in the eighteenth century or more recently. We didn't understand why it was octagonal, and we couldn't figure out why it was located at the back of the yard, where there should have been a stable in 1787, according to a map reconstruction of the property by National Park Service historian Anna Coxe Toogood. One possibility was that it could be the pit beneath an icehouse, and we turned to the documentary record for confirmation.

I found an insurance policy dating to the early nineteenth century that listed an icehouse in the backyard of Morris's lot, at 190 High Street, but provided no exact location and no details except that it had a "roof and door." Tod Benedict, John Milner Associates' field director for the project, found something much better on the Library of Congress Web site: a letter from George Washington to Robert Morris asking how to build an efficient icehouse. On June 2, 1784, Washington wrote, "The house I filled with ice does not answer-it is gone already-if you will do me the favor to cause a description of yours to be taken-the size-manner of building, & mode of management, & forwarded to me-I shall be much obliged." Morris responded on June 15 with the following detailed description of his icehouse, presumably the same one we were investigating:

My Ice House is about 18 feet deep and 16 Square, the bottom is a Coarse Gravell & the Water which drains from the Ice soaks into it as fast as the Ice melts. This prevents the necessity of a Drain which if the bottom was Clay or Stiff Loam would be necessary and for this reason the side of a Hill is preferred generally for digging an Ice House, and if needful a drain can easily be cut from the bottom of it through the side of the Hill to let the Water run out. The Walls of my Ice House are built of Stone without Mortar, which is called a Dry Wall, until within a foot and a half of the Surface of the Earth when Mortar was used from thence to the Surface to make the top more binding and solid. When this wall was brought up even with the Surface of the Earth I stopped there and then dug the foundation for another Wall two foot back from the first and about two foot deep, this done the foundation was laid across so as to secure the whole of the Walls built on the inside of the Hole where the ice is put and on this foundation is built the Walls which appear above ground and in mine they are about ten foot high. On these the Roof is fixed, these Walls are very thick, built of Stone and Mortar afterward rough case on the outside. I nailed a Ceiling of Boards under the Roof flat from Wall to Wall, and filled all the Space between that Ceiling and the Shingling of the Roof with Straw, so that the Heat of the Sun cannot possibly have any effect on the bottom of the Ice House. I placed some Blocks of Wood about two foot long and on these I laid a platform of Common Fence Rails Close enough to hold the Ice & open enough to let the Water pass through, thus the Ice lays two foot from the Gravel and of course gives Room for the Water to Soak away amazingly. The upper Floor is laid on Joists placed across the top of the Inner wall and for greater security I nailed the Ceiling under those Joists and filled the Space between the Ceiling & Floor with Straw. The Door for entering this Ice House faces the north, a Trap Door is made in the middle of the Floor through which the Ice is put and taken out. I find it best to fill with Ice which as it is put in should be broke into small pieces and pounded down with heavy Clubs or Battons such as Pavers use, if well beat it will after a while consolidate into one solid mass and require to be Cut out with a Chizell or Axe-I tried Snow one year and lost it in June. The Ice keeps until October or November and I believe if the Hole was larger so as to hold more it would keep until Christmass. The closer it is packed the better it eeps & I believe if the Walls were Lined with Straw between the Ice and the Stone it would preserve it since The melting begins next the Walls and Continues round the Edge of the Body of Ice throughout the Season.

To the extent that we can compare the icehouse found at the site of the new Liberty Bell Center with Morris's description, they appear to be identical. The excavated ice pit was also built of unmortared stone, and it, too, had a gravel "floor." Our icehouse was only nine feet deep, but it was truncated, cut off at the top by the approximately nine foot-deep basement of the nineteenth-century building that stood on the lot until demolition began for the mall in the 1950s. What was lacking, of course, from Morris's description was the shape, which was perhaps incidental or too eccentric to mention.

This Read the Revolution feature was written by Sara Underwood, who was a Curatorial Intern at the Museum and will be a senior at Washington College, Chestertown, Maryland.