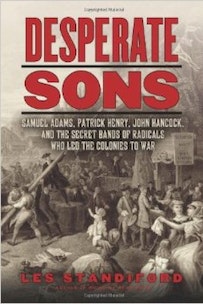 Purchase the book from Harper Collins.

After the French and Indian War, tensions began to rise between Great Britain and the American colonies, particularly as the Americans grew resistant to new taxes placed on them by Parliament without American representation. This excerpt from Les Standiford's Desperate Sons describes America's increasing number of grievances with its mother country and Britain's indifference to the colonists' complaints.

Though the mother country had never levied any tax directly on its American dependency, various trade duties had been applied over the years. Earlier in 1764, in fact, [then British Prime Minister George] Grenville had pressed for passage of the Sugar Act, a modification of a piece of 1733 legislation imposing a duty on molasses imported into the colonies from Britain. The new Sugar Act actually reduced the levy on molasses from 6 pence to 3 pence per gallon, a tactical move that Grenville hoped would find favor among colonists who had responded to the original act by smuggling most of their molasses past British customs agents — those few they were unable to bribe, that is.

The 'new' tax was roundly decried as onerous by the colonists, however, as their own economy suffered in direct proportion to the downturn in Great Britain. Trade with the distressed mother country was down, and with the war over and its associated free spending dried up, prospects were grim. Moreover, a theoretical objection was also raised by opponents to the measure when it was noted that the British Constitution excepted its subjects from 'taxation without representation.' Previous revenue-producing measures imposed by the British had been cloaked in the rhetoric of 'trade regulation,' but colonists argued that the Sugar Act was a bald-faced tax. And although the citizens of England might rightly be themselves taxed by the members of a Parliament that they themselves had elected, the colonists had no representatives in that body...

At the same time that Parliament approved the Sugar Act (which also added other duties and allocated funds for the upgrading of the British customs service), Grenville warned that there might be further measures proposed in the following session of Parliament, among them a tax for appending an official stamp on most local documents, newspapers, and magazines used in the colonies...

To [Benjamin] Franklin and a number of his fellow colonial envoys, the prospect of some tax being levied seemed inescapable. After all, the recent rebellion of tribesmen led by Chief Pontiac in the just-acquired territories of New France had reminded most responsible officials on both sides of the divide that someone would need to pay for maintaining a peacekeeping force on the colonial frontier. One knotty question remained, however: who?

Part of the colonists' antipathy to the revenue-boosting measures was attributable to a growing distrust of those who were sent from England to handle their principal affairs. As one American who had been living in London for a time wrote in a 1758 letter, 'most of the places in the gift of the Crown have been filled out with broken Members of Parliament, of bad if any principles, pimps, valets de chambre, electioneering scoundrels, and even livery servants. In one word, America had been for many years made the hospital of Great Britain for her decayed courtiers, and abandoned, worn-out dependents.' Paying for necessary services was bad enough, but the prospect of turning over one's hard-earned pennies to schemers and incompetents was to most colonists simply beyond the pale.

Likewise, the concept of paying for a permanent garrison of 10,000 British troops on the borders of Canada and the bayous of New France raised hackles among many. The prevailing sentiment was that colonial militiamen, among them a certain George Washington, had proved themselves to be as able as, if not more able than, the King's troops in the sort of irregular actions that had characterized much of the fighting on the frontier during the French and Indian War. Yet for all the ability of the colonial fighters, it was nearly impossible for a colonial militiaman to obtain a commission in the King's army.

From the opposite standpoint, few Britons gave the colonies much thought... Where the colonies registered at all, it was primarily among the merchant class. There was a fair amount of profitable trade with the colonies, though the perception was that the colonies were certainly on the receiving end, there only to be profited from. In short, in the minds of most Britons, the colonies existed primarily for the benefit of the mother country, and the colonists who went there should be pleased at whatever benefits they might accrue from association with the most powerful nation in the world.

As for the notion of providing the colonists with representation in Britain's Parliament, most on the eastern side of the Atlantic found the idea downright comical. One commentator described American colonists as a 'crabbed race not very unlike their half-brothers, the Indians, for unsociable principles and an unrelenting cruelty...'

Of course, some more thoughtful commentators opined that such patronizing attitudes would come back to haunt the British... William Pitt, the 'Great Commoner' and brilliant tactician who had guided his country to success against the French, was among the more farsighted Britons who rose in Parliament to warn against climbing up the backs of the colonists: 'I will be bold to affirm, that the profits to Great Britain from the trade of the colonies, through all its branches, is two million a year. This is the fund that carried you triumphantly through the last war...'

Such liberal thinking held little sway in practical British politics of the mid-1760s, however. Money was needed, and although no member of Parliament was willing to risk rioting in the streets of England by taxing his constituents, most were convinced that the colonies would cave in or pitch in when the matter was pressed.