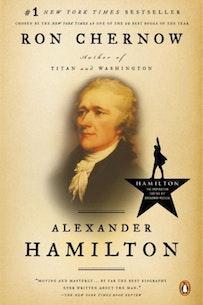 At the end of the Broadway musical Hamilton, An American Musical, the cast sings the question, “who lives, who dies, who tells your story?” As we were writing the exhibit, Hamilton Was Here: Rising Up in Revolutionary Philadelphia, the curatorial team at the Museum often asked the same questions. Everyone who has ever written about Alexander Hamilton has had their own point of view. Often those views are extreme, authors either celebrate or criticize him. We weren’t interested in judging Hamilton, one way or the other. Rather, we wanted to present several possible views of Hamilton, and allow guests to come to their own conclusions about his life and legacy.

To do this, we read a number of Hamilton histories with widely differing points of view. Three books, Alexander Hamilton, The Whiskey Rebellion, and Historians on Hamilton were particularly influential in helping us shape the exhibit.

Alexander Hamilton by Ron Chernow was the inspiration for the Broadway musical, Hamilton: An American Musical. Chernow celebrates Hamilton’s rags-to-riches story. He delves deeply into Hamilton’s life, making it one of the most complete biographies available. According to Chernow, Hamilton is important because he...

"…was the prophet of the capitalist revolution in America. If Jefferson enunciated the more ample view of political democracy, Hamilton possessed the finer sense of economic opportunity. He was the messenger from a future that we now inhabit. We have left behind the rosy agrarian rhetoric and slaveholding reality of Jeffersonian democracy and reside in the bustling world of trade, industry, stock market, and banks that Hamilton envisioned. (Hamilton’s staunch abolitionism formed an integral feature of this economic vision.) He also emerged the uncontested visionary in anticipating the shape and powers of the federal government. At a time when Jefferson and Madison celebrated legislative power as the purest expression of the popular will, Hamilton argued for a dynamic executive branch and an independent judiciary, along with a professional military, central bank, and an advanced financial system. Today, we are indisputably the heirs to Hamilton’s America, and to repudiate his legacy is, in many ways, to repudiate the modern world.

"Not every decision Hamilton made was supported by everyone, particularly when it came to his economic plans. For instance, he wanted to transform the American economy from an agricultural to a mixed agricultural and industrial one. Perhaps most controversially, he wanted the new Federal government to take on all of the states’ Revolutionary War debt, so the government could establish and maintain good credit. He would do that by funding debt payments with tax revenues. According to his plan, this would help strengthen his new economic system. He chose to focus his first tax on whiskey production. Whiskey producers in western Pennsylvania, who were already critical of the stronger central government under the Constitution, protested and then openly rebelled against Hamilton’s whiskey tax."

In The Whiskey Rebellion: George Washington, Alexander Hamilton, and the Frontier Rebels Who Challenged America’s Newfound Sovereignty, William Hogeland explores how Hamilton’s tax plan inspired these protests and the lengths he would go to resolve them in favor of the new national government, even at the expense of the rights of individual citizens. Hogeland explained that:

"Alexander Hamilton and his allies, meanwhile, whose dreams had long been obstructed by ordinary people’s tactics crude, violent, sometimes effective for influencing public finance policy, saw enforcing the whiskey tax as a way of resolving that fight in favor of the moneyed class with the power to spur industrial progress."

For Hogeland, this was the culmination of Hamilton’s national plan and a test of his abilities.

"Six years later, authoring the whiskey tax as President Washington’s treasury secretary, Hamilton had matured in the practice of law and politics, and the United States of America had become, thanks in part to Hamilton’s efforts, a government with direct powers over citizens throughout the states. Opening the purses of the people, in Robert Morris’s expression, was possible at last, and Hamilton was in full command of his excitement, impatient with anyone whose imagination lacked the scope of his own. He had a relentless commitment it was uncanny, given the fertility of his imagination to the minutiae involved in administering whatever his ambitions demanded. There was no argument he couldn’t make impregnable, no argument he couldn’t eviscerate."

If Chernow and Hogeland offer contrasting views of Hamilton, Renee C. Romano and Claire Bond Potter, in their edited work Historians on Hamilton: How a Blockbuster Musical is Restaging American’s Past help us see how Hamilton has been included in history, who chose to include him, and why. In their introduction, Romano and Potter remind us that our view of Hamilton is dependent on who tells his story and that while it might be Hamilton’s story, it’s not his story to tell anymore.

"…Lin-Manuel Miranda hoped that academic historians would want to engage with his creative foray into the past. We took on that challenge. We believe that Hamilton offers more for historians to consider than whether its portrayal of the American Revolution and the early national period is accurate (although we are happy to say that several of our authors do just that). But we also believe that the play is about how history unfolds, and how events are narrated across generations. It emphasizes the human side of history, and what it means to have a vision for the future. From the moment George Washington warns Hamilton that “history has its eyes on you,” the young founder frets about how he will be portrayed in a historical record that will outlast him. Once the Revolution is won, Hamilton is constantly preoccupied with promoting and protecting his legacy: how he will go down in history described in the show as “planting flowers in a garden you will never get to see” is a central theme."