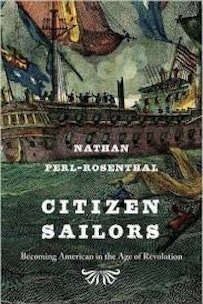 Citizen Sailors: Becoming American in the Age of Revolution by Nathan Perl-Rosenthal

Born in Connecticut to a seafaring family, Nathaniel Fanning served in the Continental Navy and was commander of an American privateer ship in the later years of the Revolutionary War. As a privateer, Fanning disguised his ship as a Royal Navy cutter to deceive enemy vessels. Not fooled by the disguise, British officers captured Fanning and his crew in 1782 and interrogated them about their origins. Fanning's crewmen were determined to be Irish and were executed, while Fanning was believed to be American and was imprisoned.

The story of Nathaniel Fanning, who went by the alias "Captain Dyon," frames Nathan Perl-Rosenthal's study of the formation of American citizenship at sea. Citizen Sailors: Becoming American in the Age of Revolution examines the evolving concepts of "identity," "nationality," and "citizenship" in the decades surrounding American independence up to the War of 1812.

The story picks up with Fanning in prison...

As he whiled away the days in his English prison in 1782, young Nathaniel Fanning's thoughts probably turned from time to time to the divided family that he had left behind across the ocean. The Fanning clan was a sizeable one even by the standards of famously fecund New Englanders. The privateering captain had twelve uncles and aunts and dozens of first cousins who were thickly settled in communities on the New York and Connecticut sides of the narrow Long Island Sound. By the end of the American war, however, the branches of the family were at one another's throats. The Declaration of Independence by the American Congress in July 1776 had initiated what Edmund Burke called an 'unnatural civil war' as American patriots fought to carve their new nation out of the British empire. The conflict unfolded simultaneously on the grand struggle to win the allegiance of the populace for the new government. Choices about loyalty cut painfully into the hearts of the towns and households. Even the most prominent patriots were not spared this pain-and Fanning's clan was no exception. Many of the family, including Nathaniel's father and his Long Island uncle Phineas, took up arms in the patriot cause. But Nathaniel's uncle Edmund, who had made a successful career as an imperial officer before the war, remained loyal to the Crown. He quickly became a leader among New York loyalists and even formed a regiment of loyal Americans to join the British Army.

As the imperial crisis became a full-fledged war starting in 1776, partisans on both sides of the conflict worked with growing intensity to divide American citizens from British loyalists. This was often not an easy task. Many North Americans and even some Britons were torn between loyalties and uncertain about how to steer safely through the political and military tumult. Whether for lack of a strong commitment or out of expediency, many of them cultivated a studied ambiguity about their allegiance or tried to avoid committing openly to one side or the other. Officers and officials on both sides responded with campaigns to force people to choose sides. Loyalists faced often intense pressure from local vigilante groups, state officials, and the Continental Congress itself to recant their allegiance to the British Crown or face the loss of their property, time in jail or worse. Some sixty thousand loyalists ultimately departed North America under duress, forfeiting property worth over £10 million. British officials were no less intent on spreading allegiance to the Crown. In 1776, in the wake of a successful military campaign that had retaken his brother's hometown, Edmund Fanning personally asked Phineas to abjure his allegiance to Congress and take an oath of loyalty to the Crown. When his brother refused, Edmund 'damed him for a Rebble' and declared in exasperation that he and his son had 'done more hurt against government than any two men in the country.'

The stakes of choosing an allegiance during the American revolutionary war were nowhere higher than at sea, nor was there any place where the fog of uncertainty around allegiance settled more profoundly. The year 1776 had brought not only the Declaration of Independence but also the start of a massive privateering war between Britain and the United States. The two belligerents dispatched thousands of privateers to hunt down and capture the enemy's property for glory and profit. But the nature of the American war, a civil war, created a profound new difficulty: how were they to tell which ships, cargoes, and crews were on which side? In the century before 1776, privateersmen had come to rely on an array of visual and aural cues-the cut of a sailor's coat, the lilt of a foreign tongue-to identify the seamen and ships of enemy powers. These clues had provided captains with a commonsensical notion of nationality that served as a powerful check on merchant mariners who might try to disguise or dissimulate their nationality on the water. In the war for American independence, in which both sides were members of the English-speaking Atlantic world, this common sense of nationality was a dead letter. The experience of Nathaniel Fanning and his men suggests how damaging the loss of this time-tested heuristic could be. While in command of his own privateer serving the American cause, Fanning had managed to masquerade so convincingly as an Englishman that he tricked British naval officers into thinking he was one of them. Once he was captured, two experienced English officials had been unable to figure out at first which British territory he had been born in. And Fanning himself was not immune to this reign of confusion: Irish-born men serving in his crew had successfully passed themselves off to him as Americans when they enlisted. The similarity of manners, appearance, and accent between Britons and the newly independent Americans meant that nobody could rely on their senses, as they had before, to distinguish their countrymen from their enemies.

Faced with these challenges, sailors and admiralty courts on both sides of the conflict found themselves obliged to innovate, developing a novel definition of American nationality and new ways of identifying nationality at sea. Almost as soon as the war began, seafarers and jurists started to cast American nationality as flowing from an individual's political behavior and choices rather than imagining nationality to be a quality fixed by birth. Even more remarkable, for the duration of the war both sides limited the use of native language and other cultural cues as a means to detect nationality at sea. Though race and birthplace continued to be seen as important markers of belonging, most Britons and Americans involved in the maritime world concurred that the best way to distinguish between the two groups was to examine individual mariners' political choices. Together, these changes marked significant shifts in how allegiance was conceptualized and in the methods for identifying political belonging in the maritime world and indeed in the early modern European Atlantic.

Much was at stake in this reimagining of the nature of allegiance and belonging. The struggle over identity and identification at sea was considerably more costly to both sides, in purely monetary terms, than the expropriation of British loyalists in North America. Contemporary estimates put British losses to American privateers in the hundreds of millions of pounds, comprising over two thousand ships. Armed vessels sailing from Britain alone (not counting those outfitted in the colonies or occupied U.S. territory) captured some four hundred rebel ships, with a total value that likely reached into the millions of pounds as well. The human cost was also comparable to that of the American loyalists. Even assuming that most of these vessels carried minimal crews (and many certainly did not), tens of thousands of seamen ended up captured, in prison, or dead as a result of their identification with one side or the other. As Fanning and so many other seamen knew, the allegiance that one chose-or the one that was imposed on you, if you were not careful could be a matter of life or death.

The maritime world was by no means the only place where American nationality was being redefined during these years, and sailors were not the only ones doing it. Yet the construction of American nationality in the transatlantic seafaring world was distinctive, and it reveals otherwise unseen dimensions of the revolution in political belonging that began in 1776. Viewed from the sea, the transformation of nationality takes on a far less parochial American cast. Many Britons involved in the maritime world, up to and including naval officers and high government officials, experimented with the notion of allegiance as a choice-even as their government refused to admit any hint of American sovereignty. The reconceptualization of nationality in the maritime world was also unique in the sense that the revolutionary war marked only the beginning of a longer and contested process. Once loyalists had fled the United States, as many did, questions about their nationality effectively vanished. For many Americans working on land, too, the end of the war meant an end to questions about their nationality. American mariners, in contrast, continued to face challenges to their U.S. citizenship for decades thereafter. At sea, the revolutionary-era reimagining of nationality was only the first leg in a long journey, filled with unexpected changes of course, that eventually gave rise to a new kind of citizenship.