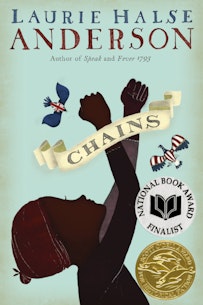 Purchase the book through Indiebound.

To celebrate the start of a new school year, today's excerpt comes from a novel written for teens, but engaging for anyone young at heart. Laurie Halse Anderson's book Chains—winner of the Scott O'Dell Award for Historical Fiction and a National Book Award finalist—tells the story of a thirteen-year-old slave girl named Isabel whose sale to a Loyalist family in New York City coincides with the start of the Revolutionary War. Here Isabel alerts the Rebel army to a plot she overheard her

"The moon was my friend.

"It lit up the library enough for me to make my way without stumbling into anything. The snuff jar stood on the corner of the desk. I held my breath as I lifted the lid, put my hand inside, and slowly pulled out the keys. I crouched behind the desk and examined them in the moonlight. Only one was small enough to fit into the top drawer's lock...

"From the farthest reach of the drawer I pulled out a single sheet, folded once. I held it up to the light and quickly read; it was a list of names, with mayor's at the bottom. He had titled it 'Committee to Preserve the King's Peace.'

"I tucked the paper in my pocket, tied it tight, and slipped it under the waistband of my skirt where it could not be seen. I closed and relocked the drawer, then carefully returned the keys to their hiding place.

"I tiptoed back through the house and slipped outside, quiet as a ghost.

"The air was hot and dripping, as if the city were wrapped in a wool blanket just pulled from a boiling pot. I made my way along the streets seen only by cats, rats, and a slave hurrying by with a bundle on her head. Since she carried a lantern, and no doubt had a pass from her master, she was allowed to be out walking after dark. I was not...

"The Battery was the fort at the southern tip of the island, with high walls and cannons that pointed over the water to discourage enemies. It was headquarters of the Patriot army in New York. Even if General Washington was elsewhere, here I could find an officer who would understand the value of the list.

"I marched past the rows of tents set up on the grounds outside the fort, trying very hard to ignore the men and boys who stared as I walked by. As I neared the gate, a sentry stepped out and blocked my way. 'Do you have a pass, girl?'

"I swallowed hard and tried to remember the name of the colonel who worked with Master Bellingham. Fagen, Jaden, McReadan...

"'Well?' A few other soldiers drinking coffee outside of their tents had stopped talking to observe.

"Telling a lie would not benefit me. 'A Loyalist, sir, who would beat me bloody if he knew I was here.'

"He looked me over and yawned. 'Come on, then. I could do with a walk to keep me awake.'

"I followed him inside, past a room of men sleeping on the floor, along a hall to a small room where a low fire smoldered in the hearth, a chair drawn up before it. The moonlight had broke free of the clouds again and lay in gray pools beneath the windows. A table stood by the door, where a heavy-set man scratched away on a piece of paper, his work lit by a half-dozen candle stubs that would soon burn out.

"The soldier drew himself up to his full height. 'This girl has a message, sir. Claims it must be delivered in person...'

"'What is it?' he rasped. His voice sounded raw, like it had been run against a grater. An onion poultice was tied around his neck.

"I dropped in a polite curtsy. 'I have information for Colonel Regan.'

"'Take her away, sergeant. I am too busy for this.'

"I pulled with all my might and lost my footing. Both the sergeant and me stumbled against the table. The ink bottle overturned and poured across the table and papers. The sick man jumped up with a mighty curse and several ugly statements about my character.

"'They want to kill the general!' I finally pulled free of the sergeant's grasp. 'I have proof!'

"The man was concerned only with rescuing his papers from the spreading pool of ink. 'Sergeant, remove this bird-wit!'

"'Do not touch her.' The commanding voice came from the center of the room.

"The sergeant stood at attention. The man with the inky hands did too, swallowing hard and wincing at the pain in his throat. A figure rose from the high-backed chair that stood in front of the hearth. He wore the dark blue coat of an officer, with buttons and buckles that reflected the firelight. His features stayed in the shadows, but I could see a book in his left hand, his finger marking the page...

"[Colonel Regan] closed the book, set it on the floor, and leaned forward, his elbows on his knees. 'Tell me all.'"