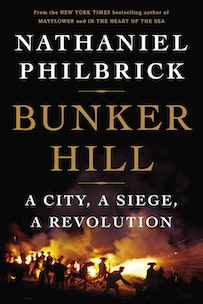 Bunker Hill: A City, A Siege, A Revolution by Nathaniel Philbrick

On the morning of June 17, 1775, British regulars and American provincials clashed in a savage battle for possession of a strategic height overlooking Boston Harbor. Although known as the Battle of Bunker Hill, the action actually took place on nearby Breed’s Hill, where Americans hastily constructed a fortification. British forces awoke to find this new threat looming across the harbor and responded swiftly with an attack. Ultimately, the British could claim victory when they swept the provincials from their positions, though the Americans still had cause for celebration—the battle claimed significant British casualties and suggested that Americans could stand up to highly-trained British forces. Nathaniel Philbrick described the uncertain, dramatic start to this legendary battle in his recent book, Bunker Hill: A City, A Siege, A Revolution.

From the start, the British advance was plagued by unanticipated complications. Many of the cannon had been provided with the wrong size of cannonballs; as a last resort, the artillerymen took to firing alternative projectiles—clusters of smaller balls known as grapeshot—but the mix-up stalled the initial momentum of the attack. The worst impediment came, however, from the terrain. Most of the hay on the hillside had not yet been harvested, requiring that the regulars march through a sea of waist-high grass that concealed the many rocks, holes, and other obstacles that lurked at the soldiers’ feet. The fences that Captain Knowlton and his men had cannibalized to such good effect in building the rail fence provided an unforeseen hindrance to the regulars’ advance. Every hundred yards or so, the soldiers encountered yet another one of these solidly built fences, requiring that they pause to take down the rails before they could push on ahead. Adding to the soldiers’ torment was the heat of the afternoon sun, augmented by the swirling bonfire of Charlestown and the smothering warmth of their wool uniforms. It also didn’t help matters that they were loaded down with packs and other equipment.

But gradually, Howe’s and Pigot’s long, increasingly straggling lines of soldiers made their inevitable way up the hill as beside them a city burned and above them an army waited. For those watching in Boston, the regulars made for an unforgettable sight, what John Burgoyne called ‘a complication of horror and importance beyond anything that ever came to my lot to be witness to.’ The movement of the troops amid the unceasing cannonade from the ships and the hilltop battery were impressive, but it was the destruction of ‘a large and noble town’ that transfixed the eye, particularly the church steeples, which had become, Burgoyne wrote, ‘great pyramids of fire’ as entire blocks of houses collapsed in the crashes of flame and smoke.

The provincials were equally impressed, especially those stationed in the redoubt, who had, one officer wrote, ‘the conflagration [of Charlestown] blazing in their faces.’ Few of them had ever confronted such a daunting display of military power and resolve. Joseph Warren had always insisted that there were limits to how far Britain was willing to go when it came to opposing her colonies, claiming ‘that they would never send large armies’ into battle against the Americans. Now with Charlestown burning, and an army of more than two thousand soldiers marching in his direction, he must have realized that he’d been wrong. He also must have begun to wonder whether all the destruction and death that lay ahead would be justified by the ultimate result.

Prescott, however, had more immediate concerns. He must convince his exhausted, awe-struck soldiers that they had a fighting chance. He told them that ‘the redcoats would never reach the redoubt if they would observe his directions; withhold their fire until he gave the order, take good aim, and be particularly careful not to shoot over their heads; aim at their hips.’ Ebenezer Bancroft remembered that Prescott also told them to ‘take particular notice of the fine coats,’ meaning that they should do their best to shoot at the scarlet, as opposed to red, coats of the British officers.