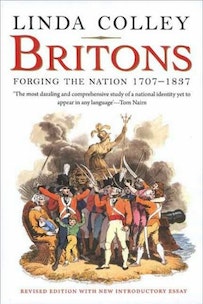 Dr. Linda Colley's popular book Britons: Forging the Nation, 1707–1837, tells the story of how Great Britain formed a "national ideology" between the Act of Union of 1707 (uniting Scotland and England) and the beginning of the Victorian era in 1837. Dr. Colley writes this complex history in an understandable and interesting way for a broad audience. She counts among her source material popular music, art, and military uniforms to provide a rich, in–depth look at British culture and identity. Although originally written in 1992, Britons shows that the history of Great Britain in the 1700s remains relevant to today's international politics.

The following excerpt serves as the introduction for the chapter titled "Dominance," which explores how Great Britain overcame the loss of thirteen of its American colonies in 1783 by expanding its dominion and making changes to its patriotic identity.

In May 1778, a medieval tournament took place on the banks of the Delaware River. Seven self–proclaimed knights of the blended rose, caparisoned like their horses in red and white silk, challenged the seven black and orange knights of the burning mountain. On a field 150 yards square, ringed with troops and set out 'according to the custom and ordinances of ancient chivalry', they broke lances, fought each other with swords, and finally — for this was the eighteenth century after all — fired pistol shots above each others' sweat–sodden, powdered wigs. Only when urged to desist by the ladies they were championing, fourteen Philadelphian maidens got up in Turkish costume and bright, silken turbans, did the knights retire from the field and rejoin their fellow British officers. The ball that followed lasted until midnight; the feasting until the early hours of the morning. Sated and entranced, served by black slaves in silver collars, guests from the élite of Philadelphia and the army that occupied it, saw themselves reflected in hundreds of specially imported mirrors and were dazzled finally by fireworks. They ended with an illuminated triumphal arch and a pyrotechnic figure of fame blowing from its trumpet the words (in French): 'Thy laurels shall never fade'.

This was the mischianza or triumph held, ostensibly, to honour the departure of the Commander–in–Chief of the British land forces in America, the Honourable William Howe. Superficially, the event was just one more manifestation of that taste for gothic romance and orientalism that was so prevalent in European polite culture at this time. Yet more was at stake here than just a stylish entertainment. Chivalry's essential function, Maurice Keen has written, is always to hold up an idealized image of armed conflict in defiance of the harsh realities of actual warfare. By definition, chivalry also reaffirms the paramount importance of custom, hierarchy and inherited rank. General Howe's tournament occurred just seven months after the crushing British defeat at Saratoga and was organized, we know, by a set of idealistic young army officers from comfortably landed backgrounds. As such, it can be seen as a window on the minds and manners of an élite under stress. After three years of indecisive war in raw, uncongenial territory, and in the face of doubt, disappointment and vague premonitions of defeat, the cream of the British officer corps sought a brief escape in an ordered and glamorous past. Sword–in–hand and on horseback, they reconstructed the war with the American colonists as they would ideally have liked it to be: a splendid crusade fought according to the rules by men of birth, and fought successfully.

The reality was very different. Just one month after Howe's chivalric triumph, the British were driven out of Philadelphia. Two years later, Major John André, one of the gallant knights of the blended rose and author of an elaborate account of the tournament, would be hanged as a common spy on the orders of George Washington himself. And in 1783, all the king's horses and all the king's men would be forced to give up the battle, leaving behind them an independent United States of America:

The boast of heraldry, the pomp of power
And all that beauty, all that wealth e'er gave.
Awaits alike th'inevitable hour.
The paths of glory lead but to the grave.

All military defeats are shattering to those caught up in them, but this defeat proved particularly so. Great Britain, which in the wake of the Seven Years War had assumed for itself the rank of the world's foremost imperial power, had been decisively vanquished by the French and by its own relatively puny colonists. The colonists in question had been overwhelmingly Protestant and predominantly British in origin. Yet this common ethnicity and religion had conspicuously failed to keep them attached to the mother country. Instead, they had been willing to kill and be killed by fellow Britons, and in the end to declare that they were not British at all but something very different. In practice, Americans would find it difficult to hammer out a new and completely autonomous identity. But the British whom they had rejected would also find the process of adjustment hard. They had been deprived of a part of themselves, and now had to re–examine their own identities and boundaries. Their leaders also had to think seriously about their public image. For the most immediate way in which defeat in America proved devastating was that it called into question the competence of the British governing élite.

Virtually every war fought since the Act of Union had gone badly at some stage, but before 1783 none had ended in defeat. Nor would any major war in which Britain was involved after this date end in defeat. (Those who are curious about this country's peculiar social and political stability probably need look no further than this for the essential cause.) The American war, then, was the great exception. A British army led by a succession of patrician generals, Burgoyne, Howe and Cornwallis, and an administration under the leadership of the eldest son of a peer, Frederick, Lord North, had suffered a humiliating defeat, as had the monarch who had persistently supported the war, George III. Those who feared, like Horace Walpole, that Great Britain would now moulder piecemeal into insignificant islandhood were absurdly premature, but the blow to the ruling order's pride and reputation was immediate and immense.

Yet in a quite remarkable way the British élite recovered. The half–century that followed the outbreak of the American war would be one of the most formative and violent periods in the making of modern Britain and in the making of the modern world — a time of accelerating industrialization and urbanization, of growing class consciousness and demands for reform, of revolution in France, and of war in Europe so massive that it swept into every other continent. Virtually every European state in this period would undergo political change, military reorganization, and social and ideological upheaval. And all but one of the world's great empires would experience a substantial reduction in the territory they ruled, or a decline in the vigour with which they ruled it. Great Britain, however, would be a conspicuous exception to this general crisis. Not an exception in the sense that it escaped crisis. Quite obviously it did not. But an exception in the extent of its resilience. By the 1820s, its rulers would claim dominion over some 200 million men and women, more than a quarter of the world's population. Unlike its European and extra–European rivals, it would keep its mainland free from civil war and serious invasion from abroad. Most remarkable of all, perhaps, far from giving ground to any substantial degree, Britain's ruling class would actually increase in size, in homogeneity, in wealth and in range of power. The first of the European élites in the eighteenth century to experience revolutionary and imperial crisis would also be the first to evolve a strategy for endurance and recovery. From the 1780s onwards, its members would set about re–ordering their authority, their image, their ideas and their composition. In the process, they not only reshaped the exercise of power in Great Britain, they also contributed to a substantial change in the content of British patriotism and identity.