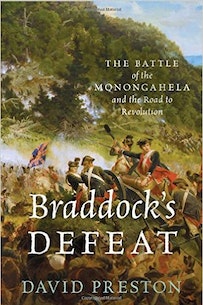 Braddock's Defeat: The Battle of the Monongahela and the Road to Revolution by David Preston

In 1754, the French and British were in the midst of a rush to control the strategically important Ohio River Valley. That year, the French established a series of forts in what is now western Pennsylvania. The French forts included Fort Duquesne, near the Forks of the Ohio River where modern-day Pittsburgh is located. Tasked with capturing the French strongholds, British General Edward Braddock marched west with an army of British soldiers, Indian allies, and American provincial troops and began a campaign that would soon end in failure. On July 9, 1755, French and Native American warriors from Fort Duquesne deftly defeated Braddock’s forces and mortally wounded the British general at the Battle of the Monongahela. The French retained control of the Ohio Valley in the wake of their victory. As the first major battle of the French and Indian War, the Battle of the Monongahela, remembered as Braddock’s Defeat, ended in a shocking loss for the British Army and accelerated the conflict into a global war.

Yet, the Battle of the Monongahela offered a young George Washington, who was recruited as a volunteer aide-de-camp to General Braddock, valuable military experience. After the death of Braddock, Washington helped save the British and provincial troops from total destruction.

The following excerpt from Braddock’s Defeat: The Battle of the Monongahela and the Road to Revolution by David Preston summarizes the challenges of this pivotal battle and its impact on the Revolutionary War two decades later.

The conventional notion that Braddock's arrogance or blunders were chiefly responsible for his defeat has depreciated the victory that Indian and French forces won by their superior discipline, tactical decisions, and leadership. It has also robbed the story of Braddock's Expedition of its many contingent moments: the British government's decision to send two understrength Irish regiments to Virginia; the Alexandria Congress, held in April 1755, that established the tempo of the campaign; the difficult voyages of French convoys and the seemingly miraculous timing of their arrival at Fort Duquesne; the decisions of Indian warriors from many nations to fight in alliance with the French; the killings of six Mohawk emissaries by Chickasaws and Cherokees in early 1755 that weakened Braddock's considerable efforts to gain Indian allies; the military intelligence that Braddock received of French forces in the Ohio Valley, and how that shaped his decision-crucial, as it turned out-to split his army at the Little Meadows and proceed with a lighter and faster detachment toward his objective; and finally, the evidence showing how Braddock managed to construct a durable military road and bring his powerful army to the gates of Fort Duquesne in one of the most rapid and successful marches in early American military history.

Braddock was not defeated due to any one of these contingencies, but to all of them. The battle was not lost by one man's arrogance or bluster. Braddock's Defeat was ultimately the sum of its imperial parts, a powerful reflection of how weak the British Empire in America really was in 1755. In that respect, the British general was simply unfortunate-a term that contemporaries routinely employed to describe his fate. He was unfortunate in having been ordered to begin his expedition in a colony that was unprepared for war and often unwilling to cooperate. The colonists were largely responsible for the horrendous state of British-Indian relations, which made it so difficult for the general to gain Indian allies. He was unfortunate in that his force was deployed in a column, one of the most difficult tactical formations from which to fight a battle, when he made contact with a highly mobile enemy force. He was unfortunate in that Indian warriors quickly collapsed his flank protection, which should have been fully adequate. He was unfortunate in that the battle occurred after a river crossing and while his army was ascending a steep ridgeline, making his column all the more vulnerable. British historian J. F. C. Fuller was entirely correct when he quipped, ‘If Frederick the Great himself had been in command of this British column, he could not have done more than Braddock did, and he would have suffered a similar fate.

Yet the defeat shaped future success. As historian Fortescue observed, ‘It was over the bones of Braddock that the British advanced yet again to the conquest of Canada.’ The British avenged the slaughter at the Monongahela when General John Forbes captured Fort Duquesne in 1758. Both Braddock's and Forbes 's expeditions shifted the center of gravity of American warfare to the continent's interior. Prior to 1755, the British had proven incapable of projecting large military forces west of the Appalachians. Their efforts were largely oriented to the navigable Atlantic coastline or the St. Lawrence River in amphibious expeditions against Acadia, St. Augustine, Louisbourg, or Quebec. Braddock's and Forbes's expeditions symbolized a new and decisive continental reach for British and American forces. Braddock's victory became the military road that he had constructed across the mountains, which was instrumental in securing future British control over the region. Following the capture of Fort Duquesne, thousands of colonial hunters, squatters, traders, and veterans followed British military roads into the Ohio Valley, where they displaced its Indian residents and sparked renewed conflict for the region's lands and resources.

The Ohio Valley represented the confluence not only of three rivers but of three peoples-Indian, French Canadian, and British who struggled at the Monongahela for their respective futures in America. Braddock's Defeat is thus a profoundly human story, involving a unique set of individuals who cast particularly long shadows over the history of the eighteenth century: George Washington, the ambitious Virginian who volunteered as General Braddock's aide and earned the praise of his contemporaries for his conduct during the battle; Benjamin Franklin, the aspiring Pennsylvania politician who had so monumental a role in sustaining the campaign with horses and wagons; Thomas Gage, who bravely led the advance party of Braddock's army and presided over the 1775 battles at Lexington and Concord; Captain Horatio Gates, the future victor of the Battle of Saratoga who commanded a New York Independent Company in 1755; Lieutenant Charles Lee of the 44th Foot, an ambitious British officer who later became a major-general in the Continental Army; and an unheralded frontier drifter, brawler, and teamster named Daniel Morgan who achieved one of the greatest victories of the Revolutionary War at Cowpens. The French and Indian perspectives will be supplied through the lives of French Canadian officers like Claude-Pierre Pécaudy de Contrecoeur and Captain Beaujeu, and Atiatoharongwen, a Mohawk Iroquois warrior from the town of Kahnawake. Lesser-known but important characters include the irascible Sir John St. Clair, the British Deputy Quarter Master General in America; William La Péronie, a French Huguenot officer from Virginia who served with Washington; and Silver Heels and Quintin Kennedy, the first an Ohio Iroquois warrior and the second a British officer who became close friends and together had among the most illustrious military careers of the entire war. The Battle of the Monongahela was the defining generational experience for many of these officers, who carried their veteran experiences from the Seven Years' War forward into the American Revolution.