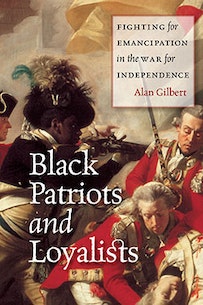 Black Patriots and Loyalists: Fighting for Emancipation in the War for Independence by Alan Gilbert

Black Patriots and Loyalists: Fighting for Emancipation in the War for Independence, by Alan Gilbert, brings a critical eye to the contradiction that while white American colonists were fighting for liberty and independence, thousands of black men and women were enslaved in the thirteen colonies. The book shows how the promise of freedom drew the enlistment and service of both free and enslaved blacks into the Continental Army and the British Army throughout the Revolutionary War. Through extensive documentary research, Gilbert raises significantly the number of African Americans known to have fought for either side as either free or enslaved men.

In the excerpt below, Gilbert details the creation of the First Rhode Island Regiment which was one of the first and most distinguished regiments comprised of both white and black soldiers.

In 1777 the Crown reconquered Newport, the capital of Rhode Island. Encamped at Valley Forge, the two Rhode Island Patriot battalions had few soldiers. On January 2, 1778, General James Mitchell Varnum wrote to Washington: ‘The two Battalions from the State of Rhode Island being Small, & there being a Necessity of the State’s furnishing an additional Number to make up their Proportion in the continental Army; the Field Officers have represented to me the Propriety of making one temporary Battalion from the two, so that one entire Corps of Officers may repair to Rhode Island, in order to receive & prepare the Recruits for the Field. It is imagined that a Battalion of Negroes can be easily raised there.’

The subsequent Rhode Island Resolution for Negro Recruitment of 1778 combined the two revolutions for American freedom. It declared: ‘That every slave so inlisting shall, upon his passing muster before Col. Christopher Greene, be immediately discharged from the service of his master or mistress, and be absolutely free, as though he had never been incumber’d with any kind of servitude or slavery.’

Debating the proposal in the legislature, a proslavery delegate suggested that the state could not consistently recruit ‘a band of slaves’ to defend American liberties. In a revolution for the natural rights of man, the inconsistency lay in the bondage this delegate commended. As another delegate imagined, this act would subject Americans to ridicule by the British similar to the one ‘we so liberally bestowed upon them on account of Dunmore’s regiment of blacks.’ Yet opponents could suggest no alternate source of recruits.

In Rhode Island, imperial forces had conquered ‘the Capital...and a great part of this State,’ and the legislature declared that ‘every able-bodied Negro, mulatto, or Indian man slave...may inlist into either of the said battalions.’ It mandated that ‘every slave so inlisting shall be entitled to and receive all the bounties, wages, and encouragements allowed by the Continental Congress.’

The resolution also called for reimbursement of the Rhode Island legislature by the Continental Congress for the purchase of slaves to free in order to fight on the Patriot side. But Congress had not promised to recompense owners. Governor Cooke had written to Washington that whites would not enlist for what the Continental army could pay. The Patriot cause in and of itself did not inspire enough whites. Emancipation would move blacks more deeply. Enrolling blacks was thus feasible; it was, Cooke insisted, ‘impossible to recruit our battalions in any other way.’

On passage of the resolution, Cooke wrote to Washington, ‘Liberty is given to every effective slave to enter the service during the war; and upon passing muster, he is absolutely free, and entitled to all the wages, bounties and encouragements, given by Congress to any soldier enlisting into their service.’ Cooke added, ‘The number of slaves in this State is not great but it is generally thought that three hundred and upward will be enlisted.’

On February 19, 1778, a large crowd of blacks gathered in South Kingstown. According to Captain Elijah Lewis, some whites, notably Hazard Potter, attempted to frighten recruits. Cuff Greene, a former slave of James Greene, and Dick Champlin and Jack Champlin, who had belonged to Stephen Champlin, enlisted in the Continental army. In Narragansett or South County, which had the largest ratio of blacks to whites, approximately one in three joined. But owners campaigned to discourage blacks from enlisting. As Governor Cooke wrote to Nathanael Greene on April 19, 1778, ‘Your observation upon South Kingston in respect to the Negro Rigment is very Just; they are not pleased with it at all and grumble a good deal.’

According to an initial return for the First Rhode Island Regiment, July 6, 1778, the four companies had 19 commissioned officers and 144 noncommissioned officers and privates. On July 16, Nathanael Greene wrote to Washington that the regiment was ‘about 130 strong.’ An additional company soon brought the total to 226 officers and enlisted men. Historian Lorenzo Greene estimates that between 225 and 250 blacks— mostly slaves—signed up. Given casualties, desertions, and discharges, as well as incomplete muster rolls, treasurer’s lists, payrolls, and casualty lists, that figure is probably low.

Aside from the First Regiment, other free or newly freed black recruits served in Rhode Island. In December 1778, Captain Ebenezer Flagg’s company had twenty-nine black privates and, in the ranks of those whose duties would later become icons in depictions of the American Revolution, one black fifer and one black drummer. In November 1778, Captain David Dexter’s company had thirty-two blacks, and in April 1779, it had thirty-one. On December 31, 1779, the Second Company had thirty black privates and one black fifer. In addition, skilled black workers included two tailors, one carpenter, seven coopers, three wagoners, three teamsters, and one blacksmith.

To Patriots, the black First Rhode Island Regiment served as a standard of dedication. In the Battle of Rhode Island between August 5 and 31, 1778, the regiment defended the Continentals’ right flank. According to Samuel Greene Arnold’s History of Rhode Island, ‘Posted behind a thicket in the valley, [Sullivan’s brigade] three times drove back the Hessians who charged repeatedly down the hill to dislodge them.’ The Hessian colonel promptly asked for a transfer ‘because he dared not lead his men into battle, lest his men shoot him for having caused so much loss.’

Motivated by freedom and continually engaged in battle, the First Rhode Island Regiment developed its own spirit of militancy. It would become the most fearsome unit on the American side and inspire others throughout the war. In 1781 the regiment camped at Points Bridge in Croton, New York. On May 4, the redcoats staged a surprise attack, killing the commander, Christopher Greene, and a number of black soldiers, who defended him to the death. Led by Lieutenant Colonel Olney, these Rhode Island soldiers would go on to fight at Red Bank, Yorktown, and Fort Oswego.