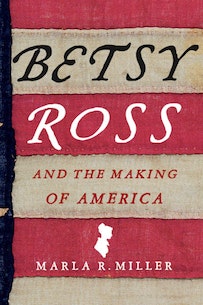 Betsy Ross and the Making of America by Marla R. Miller

As the story goes, in 1776 General George Washington visited Betsy Ross at her home to discuss the creation of a flag. Betsy, upon reviewing a sketch of the proposed flag's design, quickly suggested one major change-reducing the points on the stars from six to five. After quickly folding a piece of paper and with the snip of her scissors, Betsy Ross demonstrated with ease her five-pointed star design and helped create the nation's first flag. This family legend, recorded and promoted by her descendants in the late 19th century, turned the Philadelphia upholsterer into a national heroine, widely celebrated for her small part in America's founding.

Without any credible historical evidence to verify the claim, historians generally dismiss the family story as more fiction than fact. Yet, Elizabeth Griscom Ross Ashburn Claypoole was a real woman, living and working in Philadelphia, and she did sew flags during the Revolutionary War. In Betsy Ross and the Making of America, Marla Miller breaks through the myth and weaves Betsy's life story with that of the nation's.

In the following excerpt, we learn how Miller came to regard Betsy as more than just the mythical flag maker, but as one of the many "working men and women who made Revolutionary America."

In the metaphorical sense of course, it was artisanal families like Betsy Griscom's who in so many ways forged our nation: they embraced the protest movements that converted a temporary breach between Britain and its North American colonies into a permanent rupture, they dismantled their colonial governments and replaced them with states that in time were knitted together as a nation, and they nurtured that fledgling apparatus through the uncertainties of the early Republic. But they built it, too, in a more tangible sense. Early America was, quite literally, made by this family and thousands of families like them. The Griscom men were house carpenters, generation after generation. They raised Philadelphia, the nation 's first capital city. Griscom women cut and assembled the gowns that clothed Philadelphia's women, and applied the trimmings that made them stylish; they stitched the stays that gave shape beneath, and cleaned and dyed the fabrics of which they were constructed. Betsy, her sisters and two of her three husbands worked for decade s as upholsterers, creating the fashionable interiors that we admire today. Her brother George, a silversmith, also forged Pennsylvania's gentility. Betsy's husband John Claypoole grew up in a tanyard, converting animal hides to leather for everything from the boots the colonists wore to the books they read and the chairs they sat on. When he joined his wife in the upholstery shop, the couple continued to provide the beds on which the city slept. The most spectacular of these works today command fabulous prices on the antique market, but every time someone lay down at the end of a hard day on a comfortable mattress wrought by Betsy's shop, they were just as pleased with their purchase.

This book, then, seeks to understand not (or not merely) the Betsy Ross of patriotic pageantry, but the woman behind the tableaux. There's no doubt whatsoever that Ross was one of Philadelphia's most important flag makers of the Revolution; on the eve of the War of 1812, she would be the primary flag maker contracting with the U.S. Arsenal on the Schuylkill River. But Ross's life merits attention not only because it has something to tell us about the history of the American flag, but because it offers a glimpse into the events of the American Revolution from a point of view that we do not yet have: neither John net Abigail Adams, nor George or Martha Washington, nor fellow Philadelphians Thomas Paine, Benjamin Franklin or Dolley Payne Madison, but an ordinary woman who went to work as a teenager and labored in the furniture trades for the rest of her life, until she retired in her seventies, the mother of seven and grandmother of thirty-two. While contemporary readers can view the American Revolution through the eyes of everyday New Englanders Deborah Sampson, Martha Ballard and a Boston shoemaker with the unlikely name George Robert Twelves Hughes, Betsy Ross shows us the Revolution at its geographic and political nucleus, the streets of Philadelphia, from the perspective of a woman whose family ties put her a handshake away from the revolt's epicenter, but who nonetheless remained a working daughter, sister, wife, mother, aunt and grandmother before, during and long after the political drama subsided.

When I told people that I was writing the first scholarly biography of Betsy Ross, they usually expressed considerable surprise-surely there's something out there somewhere? Stunningly, no scholarly biography of Ross has ever been published; her legend looms so large that her life itself has been largely overlooked. Of the books that do exist on Ross, the majority, far and away, are children's literature. In part, the void is the result of an almost total absence of papers. Their familial pride notwithstanding, her descendants saw no need to preserve the letters she wrote, the shop accounts she kept, or any other record of her thoughts or actions. A potential cache of papers was lost in the 1880s when an inhabitant of the Arch Street home that today houses the museum found an old satchel filled with papers, some dating back to the early seventeenth century; which were mistaken for trash and burned. Other papers have been similarly lost, misplaced and even stolen through the years. Today, very little remains. A pair of spectacles tells us something about her fading vision, and a silk petticoat hints at her size; descriptions of her startlingly blue eyes and trademark chestnut hair begin to fill in a picture of her appearance. The recollections of her children, grandchildren, nieces and nephews contribute other small facts about her-that she liked her snuff dark, that she was fond of tomatoes-but her interior life is not preserved in journals or letters.

Some small glimpses into her personality do survive. By all accounts, Betsy Ross, at least at the close of her life, and in the eyes of her grandchildren, was a quiet, retiring woman-modest, gentle, generous. Granddaughter Susan Satterthwaite Newport, though, remembered her also as outspoken and intelligent, and grandson William Canby-who was eleven years old when his grandmother died in 1836-called her 'bustling' and 'active.' In his now celebrated 1870 talk before the Historical Society of Pennsylvania, Canby observed that she 'drove a thriving trade' and was 'prudent and industrious,' with no time to 'spend in the street gaping' or gossiping, and so was 'consequently very much respected by her neighbors.' She of course could not always have been the aging saint so fondly recalled by a loving family eager to affirm her importance to the nation's birth. Her flaws (we should all be so fortunate) are well and truly cloaked now in the mists of time. Having spent several years on her trail, I have developed my own sense of her character hunches based on small things said and unsaid rather than assessments based on archival evidence. I suspect she was headstrong, doggedly loyal and practical, perhaps even shrewd. She thought long and hard about matters of faith. I think she liked a good joke, but that her own sense of humor was more subtle. More than anything else, her choices in life also suggest a steely resolve, perhaps a smidge of obstinance. If her confidence ever slipped toward arrogance, if hardworking became demanding, or if the telling of her stories ever set the children's teeth on edge, the record of it is now lost; history can sometimes be forgiving that way.

In the absence of her own letters and diaries, Betsy's world must be reconstructed by gathering tiny shards of evidence from a wide range of disparate places: newspaper advertisements, household receipts, meeting minutes, treasurer's reports, shop accounts and ledgers, probate records, tools and artifacts of her trade, and oral traditions. The bread and butter of genealogists and antiquarians, family histories, too, hold often-unrecognized value for understanding more sweeping narratives. Today, we can map Betsy Ross's world much as her husband the ship captain charted his course at sea, marking points that she and her family also recognized and then, drawing on angles and projection, locating Ross within them as both she and the emerging nation struggled to find their place in a tumultuous world. Our cartography necessarily tracks the Revolutionary leadership of John Ross's uncles John and George Ross and George Read as well as the resistance of uncles Abel James and Giles Knight; the decisions made by Betsy Ross's husbands John Ross, Joseph Ashburn and John Claypoole; and the devotion of daughter Clarissa Wilson and niece Margaret Donaldson Boggs. Indeed, the picture of Betsy Ross would be incomplete without drawing in Betsy's large family. 'Aunt Claypoole' was deeply embedded in a large, close-knit family whose lives were all altered by the Revolution and its aftermath: to understand her life, we must grapple with the fortunes of her several sisters and brother, whose joys and losses were every bit Betsy's own. Betsy's own signal resonates most clearly in the records of the Free Quaker meeting and the many receipts and ledger entries from the flag-making work that so long sustained her. Marking all of these points reveals how the men and women of this large family-some politically influential men of commerce, others everyday artisans-responded to their colony's crisis and the ensuing demands and opportunities that accompanied life in the young Republic.

This account of the craftswoman's life neither begins nor ends with the sewing of a single flag. Setting Betsy Ross's full story straight is important not least because the legend is too central in our culture and history for the life to be so egregiously misunderstood. But coming to grips with Betsy Ross also reminds us that the Revolution's success, taken in the broadest terms, hinged not just on eloquent political rhetoric or character displayed in combat, but also on Betsy Ross and thousands of people just like her-women and men who went to work every day and took pride in a job well done.