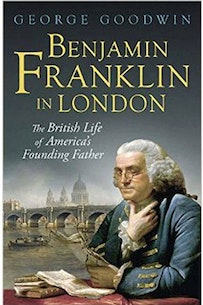 In George Goodwin's Benjamin Franklin in London: The British Life of America's Founding Father, readers are treated to a colorful and revealing account of Franklin's life on Craven Street–where he enjoyed the pleasantries of the cosmopolitan city and notoriety as an intellectual and a statesman. Goodwin's portrait of Franklin as a proud British citizen transformed into a "reluctant revolutionary," follows his first visit in 1724 to his extended stay from 1757 to 1775 and provides interesting glimpses into his daily habits and political motivations.

In the following excerpt, Goodwin presents an episode from 1770 that highlights Franklin's role as a colonial representative, actively engaged in British politics.

By 1770 Franklin was becoming frustrated and angry at Britain's treatment of her American colonies as one giant farm and forest of raw materials to feed the mother country's manufactures. He fell upon a 1766 anti-colonial pamphlet by Dean Tucker of Gloucester that described premiums given to the colonies 'as bounties' and angrily scribbled in the margins: 'What you call Bounties given by Parliament and the Society {of Arts} are nothing more than Inducements offered us ... to quit a Business profitable to ourselves and engage in one that shall be profitable to you; this is the true Spirit of all your Bounties.' The man who had been delighted to chair the Society of Arts Committee of Colonies and Trade, who had been so optimistic when testifying to the Commons for the repeal of the Stamp Act, now took a very different tone.

His views were in sympathy with government critics in Philadelphia such as Charles Thomson, who at the request of the Committee of Merchants in Philadelphia sent Franklin a copy of their letter to their London counterparts. It asked the London merchants to use their influence with the government and in Parliament to address American grievances. In his covering letter of 26 November Thomson anticipated that 'Parliament will no doubt at their meeting take under consideration the affairs of America, and to that end he was keen that Franklin 'should be fully acquainted with the temper and disposition of the Colonies' so that he could best act on their behalf. In a clear and succinct summary that showed why Thomson was to become Secretary to the First Continental Congress in 1774, he added his own powerful and distinct encapsulation of what many in the colonies now saw as a deliberately draconian policy to destroy the legislative authority as well as the taxation powers of the colonial Assemblies. A policy, moreover, that employed aggressive customs officers backed by the fierce justice of British Admiralty courts, together with an army 'left in America after the late war, under pretence of securing and defending it, {which} is now publicly declared to be for the purpose of enforcing obedience to the authority of Parliament.'

Active man that he was, Franklin circulated the letter. As he replied to Thomson in March 1770: 'Your very judicious letter of 26 November being communicated by me to some Member of Parliament, was handed out among them...It had due Weight with several, and was of considerable Use. You will see that I printed it at length in the London Chronicle with the Merchants' Letter.' Thomson's letter was published under a pseudonym, as was Franklin's reply. The contents of the latter were circulated widely in Philadelphia and then published in newspapers, first in Philadelphia and then Boston. The identity of their author became well known on both sides of the Atlantic, where the reaction was markedly different. In Philadelphia he was described by the merchants as 'a Gentleman of undoubted Veracity in London, in whom we have the greatest Confidence and Reliance,' but in the hostile London press he was scorned as 'Dr Doubleface' and 'the Judas of Craven Street.'

Franklin stated that British manufacturers deprived of their American markets would 'soon begin a Clamour that much Pains has hitherto been used to stifle,' and ended the letter with a rallying cry for the non-importation campaign, believing that 'if we do not now persist in this Measure till it has had its full Effect, it can never again be used on any future Occasion with the least prospect of Success, and that if we do persist another year, we shall never afterwards have occasion to use it.' He was, though, wrong in his estimation of the influence of the British manufacturers. The ministry failed to back down.

Non-importation did collapse, with the colonies withdrawing action one by one; New York's merchants stopped in July 1770, Philadelphia's in September and, last of all, Boston's in October. However, there seems little doubt that Franklin's letter did extend the boycott and it certainly burnished his credentials with some, though not all of the growing number of radicals across the Atlantic.

In London many considered Franklin's sentiments to be, at the very least, completely unacceptable from a man whose Post Office position was a government one.

Yet what was taken badly in London was well received by Franklin's supporters in Philadelphia. These included his loyal leather-apron men, his 'White Oaks and mechanics' craftsmen supporters, who had kept wavering merchants true to the cause of non-importation. They had become radicalized and supported existing activists such as Thomson. [Joseph] Galloway was alarmed. In September 1770 he wrote to Franklin that he knew that General Gage had written to the ministry in London about Franklin's letter, and warned him with the words, 'This has truly given me much Concern and uneasiness as I fear the Consequences not only on your private Account but on that of the Public.' He also attempted to steer Franklin away from Thomson With: 'Pray be cautious in future what you write to that Man, who is Void of Principle or Virtue.' That was something that Franklin was not inclined to do.

A near-complete extract of Franklin's letter to Thomson was sent to Boston, and its sentiments went down so well that a majority in the Massachusetts House of Representatives supported Franklin's appointment as their agent in London. Thomas Cushing, the Speaker of the House, would be Franklin's main contact for the next four and a half years, but he also reported to their four-man Committee of Correspondence, which in late 1770 included, as well as Cushing, John Hancock and John and Samuel Adams.

Franklin was now the agent in London for four colonies: Pennsylvania, Georgia, New Jersey (which he had taken up in 1769) - and Massachusetts. This gave him a considerably increased workload of routine business, though he had capable assistance from his great-nephew Jonathan Williams, who was brought over from Boston as a twenty-year-old in 1770 to continue his education and to work for his great-uncle as his financial clerk. But it is a fair question to ask why at the age of sixty-four Franklin took so much on. In particular, why did he take on the problems of Massachusetts? Especially after an event in March that heightened passions. It was one that Franklin had predicted as the likely consequence of British troops occupying Boston: on 5 March, five among a group of unarmed American civilian protesters were shot and killed by panicked British soldiers in what has become known as the Boston Massacre.

One explanation for Franklin's multi-agenting is that he did so for financial reasons: the eighteen-year partnership agreement with David Hall had come to term in 1766 and he certainly needed to make up the shortfall of around £500 in order to continue his agreeable lifestyle. Had he gained an Under-Secretaryship with the British government he might have earned an annual fee income of David Hume did in a year from January 1767 working for Henry Seymour Conway at the Northern Department. Such opportunity was not going to present itself in 1770 without a change of government. Franklin also had to consider that his Post Office salary was vulnerable: it was only the support of one of the 'Postmasters, Francis Dashwood, Lord Le Despencer, that had kept him in post following his non-importation appeal and protected the £300 a year that came with it, not to mention the free postage and the use of the fast packet ships for transporting goods across the Atlantic quickly and securely. The income from the new agencies promised to more than make up the difference, though payment could be slow at best.

One can also conclude that he not only enjoyed his lifestyle in London, but relished the challenge of influencing events there. It is hard to disagree with Jerry Weinberger's straightforward judgement about Franklin, particularly when applied to this part of his life, that 'He was moved to politics, in my view, not by pride or anger and certainly not by any sense of moral obligation, but rather because he liked it, as much as he liked chess, and... Franklin did what Franklin liked.'