Belonging to the Army 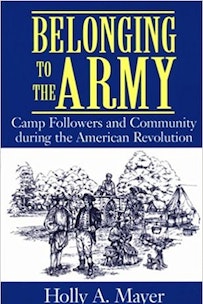 Purchase the Belonging to the Army book Buy the Book

Known collectively as camp followers, the "forgotten revolutionaries" of America's War for Independence were the many men, women, and children who provided support, supplies, and various other services to the Continental Army throughout the course of the War. While not officially enlisted in the Continental Army, camp followers gradually integrated themselves into its routines-forming a tight community around the Army that was fundamental to its success.

The following excerpt from Holly A. Mayer's Belonging to the Army: Camp Followers and Community during the American Revolution, introduces the different types of camp followers and the services they provided to the Army. Mayer focuses on female camp followers, whose contributions were often marginalized, but who performed many vital tasks-including cooking, cleaning, and caring for the troops.

"In fostering the image of a successful republican, volunteer army, both contemporaries and later historians tended to overlook or dismiss camp followers. One reason was that many equated 'camp follower' with 'whore,' or even if they were not quite so derogatory, they saw such a being as part of the lower orders that did not quite seem representative of or equal to the ideal of the American citizen. Yet to so define camp follower is not only to ignore the legions of civilians, other than prostitutes, who also followed the drum but slander many of them as well. Camp followers of the Continental Army, those 'others belonging to the army' referred to by contemporaries, were male and female, young and old, and professed a variety of connections and occupations. They were people who were not officially in the army: they made no commissioning or enlistment vows. What kept them with the army was their desire to be near loved ones, to support themselves, and/or, in some cases, to share in the adventure. This diverse company encompassed both patriots, those who embraced the cause of independence with a fervor equaling or surpassing that of any soldier, and leeches, who were there merely for personal gain. A few prostitutes. and scavengers trailed after the army, but family members, servants, and other authorized civilians outnumbered them by far. Article 23 in Section XIII of the 1776 American Articles of War provided a definition of camp followers: 'all sutlers and retainers to a camp, and all persons whatsoever serving with the armies of the United States.'"

"Sutlers were merchants or traders permitted to sell provisions to the troops. Business-minded individuals, whether self-employed peddlers or representatives of some of America's bigger mercantile concerns, saw opportunity beckon as early as the spring of 1775 when New England militia units camped around Boston. They carted their goods in and set up shop. Some then attempted to stay with the forces that were united into the Continental Army. Their desire to profit from soldiers' needs and desires, however, could and did cause difficulties. Military commanders tried to prevent problems by permitting only a select few merchants to sell their goods within the army's lines. Furthermore, before they gave a trader a license to sell in camp, they demanded that he abide by army regulations and officers' orders. Although other peddlers were allowed in-or sneaked into--camp from time to time, only those merchants who had a regimental sponsor and who agreed to the terms set before them were allowed to set up booths within the camps and, sometimes, even follow the army on campaign."

"Retainers followed the army because of personal inclination, pleasure, or the possibility of provisions and paying positions; they included women, children, servants, and volunteers. By attaching themselves to officers or soldiers, retainers helped form domestic units, families, or circles of intimates within the broader military community. Most could be labeled attendants: persons who accompanied officers or soldiers to attend or serve them. They were family members, servants, friends, and companions. Wives and other family members, friendly partisans though they may have been, acted as attendants when they visited male relatives in garrison or accompanied them on campaigns, for they provided domestic comforts and companionship. Servants and slaves, whether willing or unwilling, were there to relieve their employers of domestic chores: to attend to their gear, meals, and quarters, among other things. A few other retainers, who could be more properly called adherents rather than attendants, were partisans, or friends and companions who acted as aides and allies. Volunteers, the term referring in this case to gentlemen warriors, whether in search of a commission or not, and to men who wished to become officers and thus gentlemen, performed as companions-in-arms. Commanders accepted them within their military families so as to utilize their talents and promote their training. A few volunteers were men who just preferred to fight as independents, but most planned to join the service. After presenting their petitions for officer's appointments at headquarters, they socialized and even fought side-by- side with the officers and units they wished to join as they awaited word on their commissions. They could have returned home to await the answer, but volunteers generally were men who preferred action in the interim."

"These camp followers had personal, as opposed to official, ties to the army (if they received and then operated an official suttling concession or if they accepted jobs within the civil or staff departments, they essentially moved out of this category of followers and into one of the others). The retainers, more than any of the other types of camp followers, seemed to fit the later British phrase that described such people as the army's human impedimenta. Their ties to the military may have been somewhat tenuous and ill-defined, but commissioned and noncommissioned officers regulated them as they did everyone else they perceived as 'belonging to the army.' If a retainer did not obey military orders, he or she could be punished and dismissed from camp. The military community's need for order and security meant that everyone within it, including those not directly employed or contracted to the army, had to accept military discipline."

"Finally, civilian employees working in or affiliated with the military's staff departments received the designation 'persons serving with the army.' They were employed in the public service and often maintained at public expense. Their work was supposed to facilitate army operations and release soldiers from noncombatant duties. These army civilians served in various positions, including those of deputies, clerks, conductors, wagoners, artificers, nurses, and laborers. And they, like their uniformed counterparts, were subject to army regulations."

"All of these people helped create the Continental Community: a society made unique by its American social, political, and military origins. The fact, however, that civilians did gather around the army and that a sense of community developed was not unheard of or even unusual. The Continental Army in developing its own military community reflected and followed precedents set by ancient, medieval, and contemporary military forces. As long as there have been armies, there have been camp followers: they are a military tradition."

"The ability to endure privation marked the careers and characters of camp followers from the Roman to the early modern eras. The lives of female followers were particularly illustrative of the hardships and hazards of attaching oneself to the military, for their difficulties were compounded by the expectations and prejudices attendant on their gender and the biological consequences of their sex. Carrying babes in their arms and their household goods on their backs, these women trudged after the men and armies that gave them work and bread. The equation was set: the troops provided these women with a livelihood, and the work performed by these women contributed to the operations of the early European armies. Their work proved necessary but not extraordinary, for their tasks tended to be identical to the everyday chores of their sisters at home. They cooked the food, did the wash, mended clothing, took care of the sick and wounded, helped their fellow women, lay with men, and then bore and raised their children."