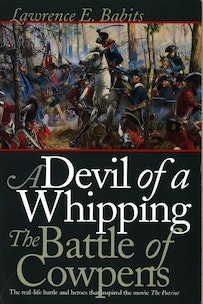 A Devil of a Whipping: The Battle of Cowpens by Lawrence Babits

Purchase the book from the University of North Carolina Press.

Lawrence E. Babits' A Devil of a Whipping transports us to South Carolina on January 17, 1781. After suffering a series of southern losses, the Americans finally achieved victory at the Battle of Cowpens. Their success came in part thanks to the strategy of Brigadier General Daniel Morgan. Though neither his riflemen or militia were reliable for a long time in linear combat, Morgan realized he could count on them both for two good shots and have the Continentals then hold the line. Ultimately the Americans were able to envelop the British troops on two sides. In this excerpt we see the start of this memorable battle, in the words of the men who fought it.

American officers made good use of the interval before the British moved forward, engaged the militia line, and began fighting in earnest. [Brigadier General Daniel] Morgan, the former rifleman, "walked behind and through the ranks everywhere, all the while cracking jokes and encouraging the men, and said, 'Boys, squinney well, and don't touch a trigger until you see the whites of their eyes.'" Morgan, an experienced combat commander, wanted to settle his men and take their minds off the British soldiers' deploying, shifting position, and getting ready to advance.

[British Colonel Banastre] Tarleton, "relying on the valour of his troops, impatient of delay, and too confident of success, led on in person the first line to the attack." He had good reasons to start the attack quickly. His right was formed and under fire while the fusiliers deployed. The quickest way to end the unequal long-range fight was for the British to get close enough to use their bayonets. Not all the infantry moved forward immediately because "major Newmarsh... was posting his officers," then a "fire from some of the recruits of the 7th regiment was suppressed, and the troops moved on in as good a line as troops could move at open files." Stabilizing the line and stopping the fire caused the 7th Fusiliers to lag behind.

Tarleton, aggressive and impatient, urged his men forward without waiting on the 7th Regiment. The Fusiliers would just have to catch up. He could not afford to give the Americans time to get ready and certainly did not want his own men to start thinking about what lay just beyond the ridge to their front. The British moved quickly up and through the old skirmish position.

As the infantry moved, both cannon opened up at a range of 200 yards or less, point-blank range for three-pounders. With every shot, the guns recoiled about four feet, were dragged back into position, reloaded, aimed, and fired again. The gunners fired both guns nearly simultaneously as "eight times cannon went off, two at a time." The firing pattern suggests the artillerymen were with the battle line. With infantry protection, they had little to fear from militia as they moved forward.

The cannon had little impact on the battle. Few veterans mentioned them, noting only that they signaled the start of fighting or were captured. The American positions complicated observation for the gunners and took American militia out of the direct line of fire...

There was no doubt when the infantry began to move upslope. At sunrise, the British "began the attack by the Discharge of two pieces of Cannon and three Huizzas." By all accounts, the British infantry "was ordered to advance rapidly," with a shout and a steady rush against the militia. Many veterans noted "the moment the British formed their line they shouted and made a great noise to intimidate," "with a loud halloo." At least one American felt the British confidence as they "advanced rapidly, as if certain of victory." Morgan, aware of the psychological impact on his militia, reacted immediately by yelling loud enough for many to hear, "They give us the British halloo, boys, give them the Indian halloo, by G-..."

The British came forward, rapidly moving over the crest toward [Joseph] Pickens's "militia rifle men." Infantrymen were taught to march at eighty steps a minute. In quick time, this increased to a hundred. Every minute they covered 200 to 240 feet. In less than three minutes, they were well within musket range of the rifle-armed militia. Even on line with a rapid pace, they were under control as "the British line advanced at a sort of trot... It was the most beautiful line I ever saw."

The South Carolina battalions waited, a short distance down the rear slope. Tarleton thought "about one thousand militia" were drawn up in his front. The militia were a tree line, well behind the actual crest and less than 150 yards in front of the Continentals. The South Carolinians had been waiting almost an hour for this moment of truth. They had freshly primed rifles. Those with new flints certainly used them; men with older flints sharpened them and tested the spark before loading and priming. In the damp January weather, fresh charges, fresh priming, and new flints were crucial to good ignition.

The "militia maintained their ground with perfect coolness." The riflemen knew they would get in a first shot at longer range with greater accuracy than their enemies armed with muskets. The militia were also fresh, if somewhat chilled, and had confidence in their leaders, many of whom they elected or chose to follow. As the British line came on, "small parties of riflemen were detached to skirmish with the enemy." Joseph McJunkin reported, "Morgan had picked out eleven of us who were to fire as a signal for opening the ball, and placed us in front several paces... When they came near enough for us to distinguish plainly their faces, we picked out our man and let fly."