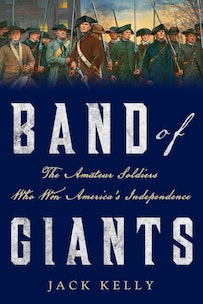 Band of Giants: The Amateur Soldiers Who Won America's Independence by Jack Kelly

In the summer of 1781, General George Washington faced a crossroads. The Continental Army's resources were depleted; its soldiers disheartened. Two options lay before Washington: attempt to reclaim New York, or head south to defeat a British stronghold in Yorktown. Jack Kelly's book Band of Giants describes the circumstances surrounding Washington's important decision to march his troops to Virginia. The successful siege of Yorktown would break Britain's will to continue the war, although it would be two more years until the final peace treaty was signed.

George Washington, graying as he approached fifty, had aged during six years of unrelieved responsibility, frustration, and trial. His troops and his wife Martha called him the Old Man. To backwoodsmen he was Old Hoss. It had been almost five years since his audacious winter attack on Trenton. Now, in the summer of 1781, Washington had to decide whether he should again stake everything on a single move.

After the disasters of 1780, hope for the American cause, John Adams admitted, 'hung upon a Thread.' In May, Washington met again with the Comte de Rochambeau to talk over the coming campaign. The French ally afterward observed that 'these people here are at the end of their resources.'

When Rochambeau finally marched his five thousand men to join Washington's army near White Plains in July, his officers were appalled by the shabby dress and bare feet of the troops there. They chuckled when an amateur American officer, not thinking of soldiering as a permanent profession, asked his French counterpart 'what his trade was in his own country.'

At the same time, the French marveled that these men, 'unpaid and rather poorly fed, can march so well and withstand fire so steadfastly.' Washington himself seemed to embody a unique spirit. A French chaplain judged that 'he never has more resources than when he seems to have no more.'

To regain New York had been Washington's dream since his humiliating defeat there in 1776. But the problem had not changed since Charles Lee had first defined it: who commanded the sea commanded the town. Washington needed the French fleet in order to crack open the heavily fortified city. Even then, the chance of success was dubious. Clinton and his fourteen thousand soldiers were so solidly entrenched that the combined French and American army of about ten thousand had scant hope of dislodging them.

The moment of decision came in mid-August. Washington received word that the Comte de Grasse, a battle-tested French admiral, was proceeding from the West Indies not to New York but to Chesapeake Bay. The development offered the possibility of an important victory over Cornwallis's army. But the prospect was a long shot... If the operation were to work, it meant marching two armies four hundred miles in summer heat. It meant coordinating that move with the French navy. Two French navies—Admiral Barras, currently in Newport, would need to sail south and rendezvous with de Grasse, bringing with him the French army's siege guns and much of Henry Knox's heavy artillery. It meant that Cornwallis would have to remain motionless at Yorktown rather than brush aside Lafayette's inferior force and depart. It meant that an alerted British fleet would not beat de Grasse to the Chesapeake to reinforce Cornwallis or draw his men off. It meant that Clinton would continue to slumber and not sally out to strike Washington's rear or take possession of the vital Hudson Highlands.

Washington strongly suspected that once his army marched south, it could not return without a victory. The troops had gone unpaid for too long. They were too destitute, too mutinous. Congress was bankrupt, popular sentiment cool. The dissolution of the army that he had warned of during the Valley Forge winter appeared closer than ever.

Was it worth the risk? Through almost the entire war, Washington had bridled under a strategy of retreat and defense. Play it safe, never venture your whole force, make certain the army survived. Now, he decided, it was time to take a chance, time to risk everything. Old Hoss was going south.