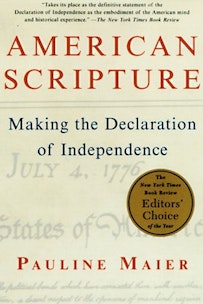 American Scripture: Making the Declaration of Independence by Pauline Maier

The history community lost an esteemed member when Pauline Maier, a scholar of the American Revolution, passed away on August 12, 2013. We present, in her honor, an excerpt from her award-winning book American Scripture: Making the Declaration of Independence. Here she provides a glimpse into "the American mind" and how it elevated what could have been a mere rebellion into the creation of a radical rethinking of government and citizenship that would lead to America's great experiment in democracy.

Nowhere was the ending of the old regime an end in itself; everywhere it was intimately connected with the founding of new governments that marked a more dramatic departure from the past than what Parliament achieved in 1689. John Adams assumed that Independence and the founding of new governments were so closely tied that they amounted to the same thing. Congress's resolutions of May 10 and 15, 1776, linked them, and so did state instructions that authorized their Congressional delegates to vote not only for Independence and foreign alliances-which they assumed were necessary for survival but impossible without Independence-but also for a more permanent American Confederation...

Even before the issue of Independence had been decided, discussion was under way on what rules and practices should prevail in a self-governing republic. In Maryland, county meetings that endorsed Independence also demanded that members of their provincial convention vote individually, not by county, that the convention's meetings be open to the public, and that all votes be recorded and published 'with the proceedings, for the information of the publick respecting the behavior of their Representatives.' Meanwhile, coastal towns in Massachusetts argued that, since every man should have equal liberty and an equal right to representation in the legislature, the allocation of seats in the General Court should be tied more closely to population...

Whatever the details, however, the task of designing institutions, even the 'privilege of choosing Deputies to form a Government,' was awesome since, as the Pennsylvania Conference of Committees reminded the people of that state, 'your liberty, safety, happiness, and everything that posterity will hold dear to them, to the end of time, will depend upon their deliberations.' And so the people helped turn a colonial rebellion into a revolution. As Paine observed years later in The Rights of Man, 'the independence of America, considered merely as a separation from England, would have been a matter of but little importance.' Independence acquired broad historical significance because it was 'accompanied by a revolution in the principles and practise of governments.'

The many Americans who debated Independence did not need Thomas Jefferson to remind them that the 'whole point' of the controversy that had absorbed their lives lay not in the ending of an old regime but in the founding of a better one, or that their future would be bound up with that powerful but ambiguous word, equality. Their resolutions and instructions on Independence provided together an eloquent expression of the American mind, which the Congressional Declaration of Independence was also meant to do, and they gradually captured 'the proper tone and spirit called for by the occasion.' The most moving of the state documents, the Declarations of the Pennsylvania Conference of Committees and of Maryland, did not provide model for Congress's draftsman to follow since they were issued after his work was done. By June 1776, however, it had become clear that in announcing their separate nationhood, Americans had to do more than demonstrate that the British Crown had forced them to the measure. They needed to overcome fear and the sense of loss, to link their cause with a purpose beyond survival alone, to raise the vision of a better future so compelling that in its name men would sacrifice even life itself.