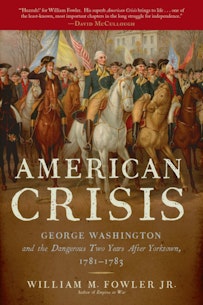 For two years after the American victory at Yorktown in October of 1781, the Continental Army -along with their Commander in Chief-remained in the field. Peace with Great Britain, while on the horizon, was still uncertain. By March of 1783, Continental Army officers and soldiers in Newburgh, New York were eager to go home. They were growing increasingly impatient with Congress over back pay. Discord at headquarters was rampant.

With peace negotiations underway, an inflammatory address circulated at camp suggesting that if Congress did not act, the officers of the army would challenge Congress's authority. General Washington had to respond. In an address that brought tears to the eyes of those present, he delivered the famous 'Newburgh Address,' quelling calls for mutiny and restoring confidence in Congress and the young nation.

American Crisis: George Washington and the Dangerous Two Years after Yorktown, 1781-1783, by historian William M. Fowler Jr., details this uncertain period leading up to the official end of hostilities in April and the signing of the Treaty of Paris in September of 1783.

On Saturday morning March 15 toward noon officers trudged up the hill to the public building. When General Gates appeared from an anteroom at the side, all eyes turned to him. He took his place and called the meeting to order. Officers took seats on the benches. The sound of several horses approaching broke the silence. The rattling noise of armed men dismounting was unmistakable. Within moments a tall figure dressed in blue stood in the doorway. The officers were astonished. Never before in this war had the commander in chief come in person to address his officers. Even in the darkest and most perilous moments of the Revolution Washington had preferred back channels, third parties, or written communications. That he would come in person testified to the serious crisis at hand. As he moved through the room men stood, ranks parted to permit him to pass. A surprised Gates acknowledged his superior and moved to the side, offering the commander in chief the place of honor.

According to Major Samuel Shaw, who stood nearby, 'Every eye was fixed upon the illustrious man, and attention to their beloved general held the assembly mute.' Washington began by apologizing for being there, which was, he said, 'by no means his intention when he published the order which directed them to assemble.' So important was this moment, he told his audience, that he 'had committed his thoughts to writing.' Wrapping himself in humility and deference, he asked 'the indulgence of his brother officers' to grant him 'liberty' to read from his text. With that he took out a sheaf of papers and began.

His speech was delivered in the grand tradition of battle orations and bore a striking resemblance to Henry V's St. Crispin's Day speech. Like the king, Washington stood before an army that had been in the field for a long time. The soldiers were demoralized, tired, and wanted to go home. His task was to remind them of their duty, their time together, and the history that would record their service. Twice before during the war, both times in writing, Washington had reminded his officers of their duty and destiny by calling forth the image of King Henry's 'band of brothers.'' Perhaps fearing that it might sound trite on this occasion, he avoided using that phrase while delivering the same emotional message.

Ordinarily the general's style was cool, deliberate, and restrained. This speech was personal. The anonymous writer had questioned his support of the army. To those who would challenge his loyalty, he declared, 'I have been a faithful friend to the army.' 'I was among the first who embarked in the cause of our common country.' 'I have been the constant companion and witness of your distresses.' 'I have ever considered my own military reputation as inseparably connected With that of the army; as my heart has ever expanded with joy when I have heard its praises.' Washington entreated his men to permit him to make their case to Congress· 'I have not a doubt,' he assured them, that 'justice' would be granted there.

Washington ended with a clarion call. By standing firm in defense of the country's liberties, he told his officers, 'you will, by the dignity of your conduct, afford occasion for posterity to say, when speaking of this glorious example you have exhibited to mankind-'had this day been wanting, the world had never seen the last stage of perfection to which human nature is capable of attaining.'

Finished, Washington put his text aside. The room was silent. The officers seemed unmoved. Washington feared that his message had failed. He looked out at his audience, paused, and took from his coat the letter he had recently received from Joseph Jones. He began to read portions of it to reassure the officers that Congress had their cause in mind. He struggled through the first sentences, hesitating over words. Standing nearby, Major Shaw watched as the commander in chief paused, 'took out his spectacles,' the ones David Rittenhouse had sent only a few weeks before, and to which he was still becoming accustomed. 'He begged the indulgence of his audience while he put them on, observing that he had grown gray in their service, and now found himself growing blind.' It was an emotional moment, Shaw wrote, that 'forced its way to the heart, and you might see sensibility moisten every eye.' Washington 'stood single and alone. There was no saying where the passions of an army, which were not a little inflamed, might lead; he appeared, not at the head of his troops, but as it were in opposition to them; and for a dreadful moment the interests of the army and its General seemed to be in competition.' But then 'he spoke,- every doubt was dispelled and the tide of patriotism rolled again in its wonted course.' Hamilton's 'torrent' was stemmed. 'The whole assembly,' according to Philip Schuyler, 'were [sic] in tears.'