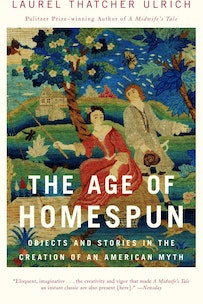 The Age of Homespun: Objects and Stories in the Creation of the American Myth by Laurel Thatcher Ulrich

In the decades of resistance leading up to the War of Independence, Americans throughout the colonies began boycotting the importation of British goods in protest of increased taxation on everyday items. Women played a critical role in this effort, as described in Laurel Thatcher Ulrich’s The Age of Homespun. Today’s excerpt shows the rise of spinning bees, with Colonial women demonstrating their patriotism in what was considered a far more genteel manner than their male counterparts.

The nonimportation movement of the 1760s gave cloth-making a significance it had never had before. In Boston, patriotic merchants revived the spinning schools. In Hartford, members of a society for promoting arts, agriculture, and commerce offered a bounty of twelve pounds to the person who manufactured the most yards of woolen cloth in a year. In Newport, the editor of the Mercury displayed at his printing office ‘a Sample of Cloth, made by a Young Lady in this Town, which is equal in Width, Fineness, and Goodness, to an English Plain.’

Newspapers trumpeted even the smallest success. In Newport, Rhode Island, a seventy-year-old woman who had ‘never spun a thread in her life before’ became a very good spinner. In Windham, Connecticut, one woman raised six thousand silk balls from a single mulberry tree. In Sutherland, Massachusetts, a lady of fashion made and quilted a petticoat from remnants in her scrapbag, patching together forty-five pieces for the outside and ninety-two for the lining. With such efforts, surely Parliament would relent. In February 1769, several newspapers reported a seemingly spontaneous contest between two Connecticut women. ‘On the 16th Instant, the Wife of Mr. John Vaughan of Lebanon agreed upon a spinning Match with a neighbouring young woman; they began their work three Quarters of an Hour after Sunrise, and left off at Nine O’Clock in the Evening of the same Day.’ The winner had spun seven skeins and two knots of fine linen yarn and her competitor almost the same.

Soon there were reports of large gatherings all along the coast of Massachusetts and into Rhode Island. For urban elites, spinning was a novelty. One writer described the Daughters of Liberty at Newport, Rhode Island, ‘laudably employed in playing on a musical Instrument called a Spinning Wheel, the Melody of whose Music, and the beauty of the Prospect, transcending for Delight, all the Entertainment of my Life.’ Another assured readers that the young women who met at Daniel Weeden’s house in Jamestown, Rhode Island, were ‘of good Fashion and unexceptionable Reputation.’ Those at Taunton, Massachusetts, were ‘young Blooming Virgins... With all their Native Beauties of Sixteen...’

Only six newspaper stories explicitly described the spinners as ‘Daughters of Liberty.’ ‘Young women’ was the usual designation, though terms like ‘Daughters of Industry,’ ‘the fair sex,’ and even ‘noble-hearted Nymphs’ also appeared. Reports from Roxbury and Chebacco alluded to public events, referring to the ‘intolerable Burdens now Laid upon us’ and to the necessity of recovering ‘our rights, properties and privileges,’ but the story from Harpswell cautioned that ‘the Ladies are impressed with such a nice Sense of their Liberties derived from their Maker, as not to be very fond of the tyrannic Restraints or the scheming Partisans of any Party...’

Stories about spinning meetings contrast with those about male gatherings. On August 14, 1769, Boston’s Sons of Liberty celebrated the anniversary of the first Stamp Act demonstrations by meeting at the Liberty Tree in South Boston where ‘fourteen Toasts were drunk; After which they proceeded in Carriages to Mr. Robinson’s at the Sign of Liberty-Tree in Dorchester; where three large Piggs [sic] barbecued and a Variety of other Provisions were prepared for dinner... After dinner 45 patriotic Toasts were drank, and the Company spent the afternoon in social Mirth,’ returning to Boston about six, passing ‘in Procession thro the Main Street.’ Considering the riots that accompanied the original Stamp Act demonstrations, the author was probably wise to add, ‘The whole was conducted with the greatest Decency and good Order.’

That same month many papers carried the story of the spinning meeting at Brookfield, Massachusetts. The ladies assembled at their minister’s house at 5:00 a.m., spinning until evening when they went out of the house into the front yard and continued their work until seven. ‘The young lady that excelled at the linen wheel, spun 70 knots,’ the minister reported, while ‘among the matrons there was one, who did the morning work of a large family, made her cheese, etc., and then rode more than two miles, and carried her own wheel, and sat down to spin at nine in the morning, and by seven in the evening spun 53 knots, and went home to milking.’ While New England’s Sons of Liberty indulged in rum, rhetoric, and roast pig, her Daughters worked from sunup to sundown to prove their commitment to ‘the cause of liberty and industry.’

While the contrasting accounts surely illustrate a differing standard of male and female behavior, they also suggest a potential conflict within the culture itself between a commitment to liberty and a fear of anarchy. Perhaps New England ministers eagerly embraced the Daughters of Liberty because they could not unequivocally defend her Sons. In publicizing the spinning bees, they promoted a form of political resistance built upon sacrifice, self-discipline, and personal piety rather than on street action, drinking, and flamboyant self-assertion...

Laurel Thatcher Ulrich. The Age of Homespun: Objects and Stories in the Creation of an American Myth (New York: Vintage Books, 2001), 177-183.