A Revolution in Color 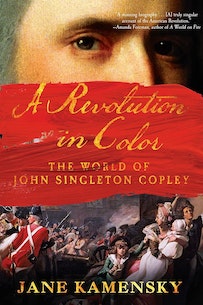 A Revolution in Color: The World of John Singleton Copley by Jane Kamensky

Married to the daughter of a wealthy Boston tea merchant, Copley was drawn into the family’s politics, whether he liked it or not, when protests over the Tea Act of 1773 threatened his father-in-law’s business and home. In the aftermath of the Boston Tea Party, Copley left Massachusetts for Europe. Settling in London a year later, Copley continued his prolific art career and remained there with his family until his death in 1815.

The following excerpt provides a vibrant introduction into the extraordinary world of John Singleton Copley and of the American Revolution as seen by him.

A cautious man in a rash age, John Singleton Copley feared the onrush of the colonial rebellion against Great Britain. Like many people of his place and time, he called the rebels’ revolution a civil war. And like many people who had lived through civil wars before him, and who have endured them since, he thought the safest side was no side at all. Copley painted John Hancock, whom he knew well and grew to despise. But by the time Hancock signed the Declaration, the painter was long gone from the country that document called into being. In the spring of 1774, during the brief interval between Boston’s ‘tea party’ and the outbreak of fighting in Lexington and Concord, Copley sailed to London, capital of the only nation he had ever known, leaving behind the second-tier British port city in which he had spent nearly four decades. John Singleton Copley had lived half his life in Britain’s American provinces. He would never set foot in the United States.

British museums, which own the greatest of his works, classify him differently. ‘John Singleton Copley, R.A. . . . British School,’ runs the text inscribed on the frame of The Death of Major Peirson, my very favorite of all his paintings, which hangs in the Tate, hard by the Thames. The heroic canvas depicts a passage in Britain’s American War that falls outside the standard narrative of the American Revolution: a battle that took place in an obscure corner of Europe, that featured no North American combatants, and that ended in British victory.

To explore Copley’s American Revolution is to treat that war, and its world, with fresh eyes. In the United States, where the War of Independence functions as a national origins story—a ‘founding’—we tend toward histories peopled by Patriots and Tories, victors and villains, right and wrong. Such tales, for all their drama, are ultimately flat: morality plays etched in black and white, as if by engravers who have only ink and paper to depict all the shades of a subject. But like the paintings Copley produced so painstakingly, the revolutionary world was awash in an almost infinite spectrum of color. Allegiance came in many shades. Some pigments were durable, others fugitive and shifting. The age of revolutions takes on a prismatic quality when we try to view it through Copley’s slate-colored eyes, eyes that saw deeply, and revealed many truths, not all of which we now hold to be self-evident.

My title also refers to Copley’s work, which began, in his tender years, as a trade. As he grew in both mastery and drive, it became a calling. As a painter of portraits and, once he escaped the confines of Boston, of the more elevated genres of history, religious art, and classical allegory, Copley worked in the upper echelons of the color trades, which included everyone from the farmers who grew the madder root from which the day’s most popular bricky reds were made, to the collectors of burnt ivory that produced the richest blacks, to the merchants who trafficked in powdered pigments from around the globe and the shopkeepers who sold them at retail, to the many kinds of painters who worked with those stuffs: housepainters and sign painters and clock painters and wallpaper screeners, and on up the ladder of occupations to the painters of landscapes, human faces, and the higher reaches of Art.

A preposterously ambitious poor boy from a preposterously ambitious place, Copley glimpsed that ladder early and climbed it relentlessly—never resting, never satisfied—for seven decades, on two continents, through four global wars. His life in color is a story of striving, a species of ambition seen, even then, as peculiarly American: hard-edged, uncloaked, impolite. Like many stories of striving, Copley’s is also a story of ever-increasing scale, both on and off the canvas. Boston was a place to paint small, to paint faces: art destined to hang in little clapboard houses, pictures that spoke to families. Paul Revere is a bit more than two feet wide, and a hair less than three feet high. In London, Copley’s compass grew, and with it his works. The pictures got big, many times the size of Revere. His largest and most complex paintings—sometimes, though not always, his best—were meant to rivet exhibition-goers, to hold a palace wall, to fill a tent.

But unlike so many rags-to-riches tales of American ambition — a genre that began to circulate toward the end of Copley’s life and that dominates our national imagination still — Copley’s is a story of profound and crippling disappointment, agonies born of both self and circumstance. His was a rueful revolution, long on second guesses and short on second chances. Though his work could be daring and innovative, he was a man of indecision, a character that might have sat more easily in an era less consumed with the urgency of choosing one’s destiny. The age of revolutions was an urgently forward-facing moment. Copley, by contrast, had what the people of his day called a bivious gaze, forever alternating between glancing over his shoulder and peering at what was ahead of him. It was a painful way to be in a go-ahead world, though by no means a singular one.

Copley’s bivious vision endures because he worked as a visual intellectual. His life and work invite us to see the age of revolutions in all its myriad complexity. Visual metaphors were central to Copley’s way of imagining and organizing his complex world. He wrestled with the tensions between figure and field, the portrait and the crowd, the modern and the antique. He was often accused of paying too much attention to details at the margins of a scene, finishing all parts of a picture equally and thus making it ‘difficult for a beholder to guess which object the painter meant to make his main subject,’ as one reviewer in London noted in 1777.When the background got too vivid, the story grew muddy. Deemed an artistic failing, Copley’s tendency to dwell on and in the verges is also a gift, drawing our attention to overlooked aspects of a story too often cast in spotlight and shadow.

Background matters to the story of Copley’s revolution, which centered less on the struggle of rebel colonists against the British crown than on family politics, the labor of art, and the dark undersides of liberty, including chattel slavery, which Copley both practiced and theorized. The history that becomes visible through his eyes is no easy story of the progress of America, but rather a stuttering series of rises and falls and eddies, all worked out on canvas, in a palette that remains startlingly fresh.

That vividness is one reason painters are good to think with. But there are others, too. Like most who practiced his trade, Copley was a middling man. He shows us those above him on the ladder of hierarchy in their true colors. He also looks, often anxiously, at the echelons of society below, which he narrowly escaped, through a combination of gumption and good luck. He remained, all his life, obsessed with rising above and afraid of falling back, properties visible in many of his works, and in the unusually large corpus of letters he left behind. A strenuous autodidact, Copley had gorgeous penmanship and terrible spelling. (I have left original spelling throughout; it is part of the story.) His letters are full of self-searching, a degree of introspection that may be common to most Homo sapiens, but is seldom accessible to historians who study people of lower middling status. Copley’s correspondence offers a rare glimpse of the development of an artist’s sight and insight, as well as a history of the early American eye.

And then, of course, there are the pictures, hundreds of them, painted on both sides of the ocean that defined the outer limits of his imagination. On the page and on canvas, Copley worked out his life in plain sight, in ways that, almost miraculously, remain visible still, some two centuries after his death.