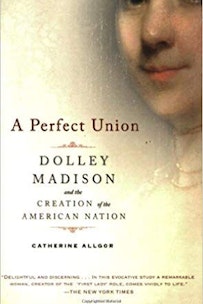 A Perfect Union: Dolley Madison and the Creation of the American Nation by Catherine Allgor

Dolley Madison made an indelible imprint on American culture and society in the Early Republic. As historian Catherine Allgor demonstrates in A Perfect Union: Dolley Madison and the Creation of the American Nation , the First Lady and “Presidentress” became one of the best-known figures in the United States, even earning the title of “America’s Queen.” Madison was, Allgor argues, an innovative and skilled politician, who employed her role as a “lady” and a hostess of social events to cultivate bipartisanship and unite the new nation. For Allgor, Dolley Madison “transformed female submissiveness into a political tool,” and in doing so, fashioned the position of First Lady into one of national and political distinction.

In this excerpt, Allgor reflects on the source of Dolley Madison’s fame.

Why was Dolley Madison so famous? In a culture that had no place for a woman in the political spotlight, and in which the only “public women” were prostitutes, Dolley was undeniably a public woman. She became a national figure when the United States was barely a nation and only men such as George Washington occupied a place in the pantheon above party politics. And, most inexplicable of all, Dolley proved herself a powerful political player in an age when women were excluded from politics. Married women had no independent legal identities; they were legally “covered” by their husbands, lacking the right to vote, make contracts, or own property, even the clothes on their backs. Dolley’s fame derived from sources other than her association with James Madison; how else to explain her position as Washington City’s social leader and political consultant in the years after James’s death in 1836? And while one might assume her influence to be greatest during her time as the president’s wife, how then to explain the many honors bestowed on her, and favors beseeched, decades after she had been the “Presidentess”? Such public attention and acknowledgements of respect are hard to reconcile with a woman who, in our time, is almost exclusively associated with Raspberry Zingers and Gem Donuts.

Dolley Payne Todd Madison was famous for precisely the same reason as her male counterparts: power. She possessed considerable political capital, which, under the veil of her culturally appointed roles of wife and hostess, she used to further her own and her family’s political aims. Paradoxically, while her sex prevented her from openly playing politics, those very bonds of womanhood allowed her the scope in which she accomplished her greatest political successes—granting political favors, constructing a modern ruling style that emphasized cooperation over coercion, and achieving her husband’s political aims. Within the conventional bounds of “ladyhood,” Dolley legitimized her husband’s administration to the nation and the world and went a long way to establishing Washington City as a capital (and to retaining it after the British burned it in 1814). Using parties, social calls, and correspondence, she built the structures of government that the new United States needed, and she presented political models of bipartisan cooperation—building bridges instead of bunkers—that would prove crucial to democratic rule. Perhaps most important, she used the persona of a lady motivated solely by feminine love and patriotism to create a sense of nationality and unity for the new Americans. In spite of a disastrous war and domestic unrest, her husband’s presidency was universally acclaimed; after the smoke cleared in 1817, former president John Adams noted that, “notwithstand[ing] a thousand Faults and blunders,” James Madison’s administration “had acquired more glory, and established more Union, than all his three Predecessors…put together.” Other political observers, no doubt giddy with relief, concurred. Their judgement reflected the triumph of Dolley’s efforts at least as much as—perhaps even more than—her husband’s.