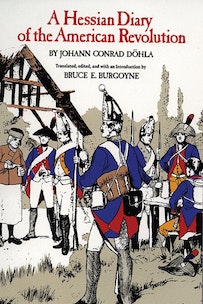 A Hessian Diary of the American Revolution by Johann Conrad Döhla

In 1777, Johann Conrad Döhla journeyed from Anspach-Bayreuth (a principality in present-day Germany) to North America to fight alongside the British Army during the American War for Independence. The young soldier was one of the about 20,000 German-speaking troops, collectively referred to as "Hessians," hired by King George III to help defeat the American Revolutionaries. Döhla fought from New York to Virginia and kept a diary of his experiences along the way. He recorded the daily activities of a soldier's life, anecdotes of his fellow soldiers, and many other unique observations about the foreign people and places he encountered.

The following excerpt includes his entries during the month of July 1781-the summer before the surrender at Yorktown.

IN THE MONTH OF JULY
2 July. We were relieved during the morning by a command of Hessians.
6 July. During the evening Private [Johann] Bär, of Quesnoy's Company, deserted from the camp without his uniform, dressed only in his linen blouse.
7 July. On today's date the besieged city of Ninety-Six in South Carolina, and the important pass between Cambridge and Charleston, was relieved by the English troops under Colonel Tarleton, and the Americans were driven back so that they had to abandon the siege.
8 July. During the afternoon the deserter Bär was returned to the regiment by the so-called Royal Refugees. They had captured him twenty miles from here.
10 July. The English fleet, which consisted primarily of transport and provisions ships, and had two warships and three frigates for an escort, was attacked by the French Admiral La Motte as the English were coming from Saint Eustatius in the West Indies en route back to England. One warship of seventy-four guns and two frigates (one of forty and one of thirty-six guns), and thirteen transport ships, carrying more than twenty-one hundred men, were captured. The rest were routed and, after a three-hour resistance, fled.
11 July. Punishment was carried out by the regiment. The deserter Bär, of Quesnoy's Company, today ran a gauntlet of three hundred men with switches, twelve times. At noon today the command [sent] to Greenbridge returned. They brought many cattle with them. These were slaughtered and divided among the regiments. Two men of the Ansbachers and two from our regiment, namely, Private [Johann Paul] Währl and Private Dressel, of Eyb's Company, were missing from this command.
12 July. Bär again had to run the gauntlet twelve times.
13 July. We had no shortage of provisions here at New Portsmouth because the inhabitants brought them, mostly fresh and plentiful, into the camp. All the foodstuffs were cheap except that a quart of rum cost about half a Spanish dollar, or in German money, one Franconian gulden.
Here, surprisingly, crabs are caught on dry land and hay grows on the trees. For this reason: here many small crabs are found that are called sand crabs. These hide in the sandy soil, in which there are many small holes, and as soon as it rains a little, these crabs come out in numbers from these holes so that the ground is covered with them. We have gathered and cooked an entire kettle full of them. They are a kind of water crab, but somewhat smaller, and they turn red when cooked and taste like ours. Concerning the hay that grows on trees, the following must be understood. There is this moss, long and soft, which frequently hangs down from the limbs, more than an ell in length, and which grows abundantly on the trees. This is gathered like fodder by the inhabitants and stacked for feeding the cattle during the winter. In Virginia there is also much clipped money because of a shortage of small change. One Spanish dollar is divided into eight parts; the piaster, however is divided into two or four parts. The inhabitants of Virginia are built tall and strong and appear rather pallid due to the great heat. Toward us they were rather complaisant and showed more respect than in other provinces. Especially, the Virginia females showed great affection for the Germans.
14 July. We received orders to embark.
15 July. We broke camp at five o'clock in the afternoon. We marched into New Portsmouth, to a wharf where the troops were to be embarked, but because it was too late, we spent the night lying under the open sky. I went on color guard.
16 July. We were embarked during the morning. I went aboard the ship Pleasant Success, on which there were two companies, Quesnoy's and the Major's.
18 July. Our ships left the Portsmouth harbor and sailed to Chesapeake Bay, where we lay at anchor for ten days.
28 July. I returned to Norfolk, on detail, to get water. This was loaded aboard our ship, as we had not been supplied with sufficient fresh water for drinking and cooking.
29 July. About ten o'clock in the morning, our fleet sailed out of the Chesapeake Bay.
31 July. We arrived in the sea harbor of the James River near Yorktown and dropped anchor.
This Yorktown-or Little, or Small, York-is a small city of about three hundred houses, but with a large circumference. It lies close to the water of the James River, rather high up on sandy but level ground. It has three churches, two Reformed and one German Lutheran, without steeples, and two Quaker prayer houses, and a beautiful courthouse or city hall, which, like most of the houses, is built of brick. There are many house here that stand ruined and abandoned by their owners. An American occupation force of about three hundred militiamen was stationed here, which, however, on our arrival, pulled back to Williamsburg, sixteen miles from here, without firing a shot. We encountered few residents here, because most had gone farther inland with all their belongings; and therefore, no French foodstuffs were obtainable.
The harbor at Yorktown is deep and two English miles wide. The James River goes more than twenty miles farther inland, but beyond Yorktown it is navigable only by small ships.
A small island, several miles in circumference, named Gloucester, which has a few beautiful buildings, lies opposite York. During the past month of July there was such exceptional heat that it was nearly unbearable aboard ship.