A Generous and Merciful Enemy 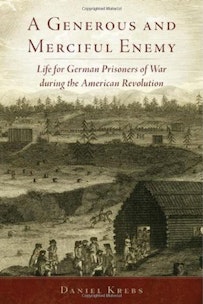 A Generous and Merciful Enemy: Life for German Prisoners of War during the American Revolution by Daniel Krebs

Tens of thousands of German-speaking soldiers — called "Hessians" after the area from which most were recruited — were hired by the British Crown in 1776 to assist in the fight against the American rebels. Daniel Krebs' book A Generous and Merciful Enemy reveals the experience of these men. In this excerpt, set early in the conflict, Krebs shows Hessian prisoners-of-war being put to work to help fill a significant labor shortage, and how the Americans hoped this integration into the colonists' daily lives would inspire them to switch sides.

The practice of hiring out the German prisoners of war began with several roll calls at the barracks between January 6 and 10, 1777. [Colonel Samuel John] Atlee and the Lancaster Town Committee wanted to find out how many of the prisoners had a trade and what skills they possessed. Among the captives who had arrived from Philadelphia, 315 claimed to have a civilian profession. Not surprisingly, considering the social composition of such units, the majority were weavers (94 men), tailors (50 men), and shoemakers (38 men). A great many other trades, however, could also be found. Even soldiers without a skill could be used as farmhands or for chopping firewood. Lancaster, a town of about 3,300 inhabitants, had a new workforce equivalent in size to a quarter of its population.

On January 11, only one day after the list of tradesmen among the German prisoners of war in Lancaster was completed, the Pennsylvania Council of Safety asked one of its members, William J. Hubley, to employ all the shoemakers among the captives to make 'shoes for this state.' From the outset, thus, revolutionary authorities used prison labor toward the war effort...

Later that year, with the Continental Army needing more supplies, Congress and the Board of War lost any misgivings they might have had about the use of prison labor. When the army lacked lead in October, the Board of War suggested that if no other workers could be found, Commissary General of Prisoners [Elias] Boudinot should provide 'a competent number of prisoners of war' for this task. Prisoners were also hired to manufacture cannons and ammunition. Furnaces and ironworks needed many workers, primarily to cut wood for their furnaces... Congress even used prison labor to pay for ammunition and other war goods. In March 1783, for instance, ironworks owner John Jacob Faesch 'agreed to discount' money owed to him by Congress 'from a contract in 1780' in exchange for thirty-three German prisoner-laborers...

The possible uses for hundreds of potential laborers in and around Lancaster also interested Christopher Ludwick, the man who had guided... eight Hessen-Kassel prisoners of war from Staten Island through Philadelphia in the fall of 1776. In March 1777, he suggested to Congress that a 'discreet & humane German Person' be appointed as 'Guardian of the German Prisoners' in North America to muster the men in Philadelphia and Lancaster, 'provide masters & Employers for them,' and 'be their Counsel & solemn Witness in Contracts which they may make with their Employers.' In other words, Ludwick wanted to be installed as a powerful supervisor for all German prisoner-laborers. He claimed, of course, to have only the captives' wants and the public's needs in mind. After all, he wrote, 'many of the Hessians & Waldeckish Prisoners of War especially single men are so well pleased with this Country and the Way of its Inhabitants that at all Events they would rather prefer to settle here than to return to the dreary abodes of Bondage from whence they came.' Allowing these soldiers and prisoners to 'breath[e] in the open fragrancy of America's freedom' would be proof of 'American Public Benevolence and lay them under further Obligation to a Generous & Merciful Enemy.'

Although this plan was never adopted, it shows how American revolutionaries tried to make use of German prisoners of war. In this case, labor would expose the prisoners to the advantages of life in America. Ludwick assumed that the German captives were waiting for a chance to leave their units and settle in North America. However, the available data... does not confirm such assertions. Among the 178 German prisoner-laborers recorded in the Pennsylvania hinterland, only 27 ended up deserting. This number is even lower than the expected desertion rate among all prisoners of war held by eighteenth-century European armies. Moreover, most deserters around Lebanon ran away only after 1782, when conditions for prisoners of war in revolutionary hands had worsened considerably.

Given the opportunity, German prisoners usually accepted work eagerly. Hessian drummers and fifers taken captive at Trenton in 1776 willingly took part in the celebrations of the first anniversary of American independence in Philadelphia on July 4, 1777. Soldiers in the Holy Roman Empire regularly worked in civilian trades; thus in some ways, captivity for the German prisoners of war resembled regular garrison life. In fact, not being able to apply their trades while in captivity might have generated more fear among the soldiers: they badly needed the extra income. This confluence of interests made the prison labor system function smoothly in 1777 and 1778. American communities did not want to shoulder the burden of keeping large numbers of enemy captives and were already experiencing labor shortages. Revolutionary institutions on all levels lacked the resources, organization, and policies to adequately confine captive soldiers. Everyone realized the great potential these prisoners had to relieve such problems and even earn a profit. At the same time, however, German rank and file in revolutionary hands became decentralized and, because of the labor system, largely privatized.