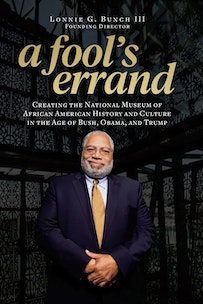 Lonnie G. Bunch III discussed the dynamic process it took to open the National Museum of African American History and Culture, in lively conversation with Dr. R. Scott Stephenson, President & CEO of the Museum of the American Revolution, as part of the Museum's Read the Revolution Speaker Series in October 2019 .

Like all revolutions, this one was intensely personal. Bunch intertwines his personal experiences with the long road that led to the NMAAHC.

So many experiences throughout my career had prepared me and positioned me for this, the grandest challenge of my life, what some have labeled my calling. As a young curator at the National Museum of American History I had been tasked to lead a curatorial team to craft an exhibition that explored America during the nineteenth century. A major element of the exhibition would explore the impact and the legacy of the enslaved. To humanize the experience of slavery I wanted to focus on a single plantation as a microcosm of the history of the peculiar institution. I traveled throughout the south in search of the perfect subject. I visited sugar plantations in Louisiana and cotton plantations in Alabama and tobacco farms in North Carolina. Eventually I was taken to the Friendfield estate, a rice plantation outside of Georgetown, South Carolina. There, standing next to a slave cabin extant since the 1940s was Princy Jenkins. In his nineties, Mr. Jenkins had once lived in one of the cabins with his enslaved grandmother.

To tap the knowledge Princy Jenkins had about the life of the enslaved on that plantation was the Holy Grail for a young historian. He told me how the enslaved did a "hard sweep" in the front of the cabin to kill the grass so there would be no vermin near their home. He took me to the rear of the cabin and explained the food that the enslaved grew to supplement the rations they were given. Next we went to one side of the cabin and he spoke about the role children played in monitoring the chimney to alert the adults in case of fires. Then I went to the other side of the cabin, but Mr. Jenkins would not accompany me. I asked him what had happened there and he again refused to come to that side of the cabin. Finally, I implored him to explain, and he just said that he would not come over because there was nothing but rattlesnakes living there. After I stopped running, I asked him why he had not mentioned how dangerous that spot might have been. He replied that people used to remember now too much is forgotten. He then said words that have shaped my career: if you are a historian then your job better be to help people remember not just what they want to remember, but what they need to remember. Right after he said those words, he shook my hand and left me standing alone by the cabin as he returned to his work as the caretaker of the plantation. I never saw him again and I am sorry that I did not have the foresight to thank him for sharing his wisdom and his history with a stranger from Washington, DC.

The struggle to help reshape America's memory to recenter race in the construction of the nation's identity, and in the words of Mr. Jenkins to remember what America needed to remember, not just what it wanted to recall about the role and impact of African Americans, by creating a place on the National Mall was a century-long battle. From 1915, the idea for a memorial in Washington was initiated by African American veterans of the Civil War whose presence and contributions to the Union victory had not been included in many of the commemorations that accompanied the fiftieth anniversary of the war's conclusion. At a time when racial segregation was the law of the land, when hundreds of African Americans were lynched and brutalized annually, when the images of blacks in film, in advertising, and in the media were ripe with stereotypes that denigrated and dehumanized, the idea to create a counternarrative was embraced by many in the African American community. It was hoped that this entity would not only honor the patriotism of the African American soldier but would also have a physical space for programs and presentations that would expand America's knowledge about the black community. Just at this initiative was getting organized the First World War seized the nation's attention and the monument was never constructed.

During the 1920s, a diverse array of African Americans, including Mary McLeod Bethune, W.E.B Du Bois, Mary Church Terrell, and Kelly Miller, supported the notion of a black presence on the National Mall. A campaign made visible, in part, by the African America press led to the hiring of Harlem architect Eric R. Williams, who created the preliminary design for what was called the National Negro Monument. In 1929, the US Congress would pass public Law 107, signed by President Calvin Coolidge, that would support the creation of such a building, but it would need massive nonfederal fundraising support, something that the onset of the Great Depression made impossible.

The notion of recognizing the contributions of black Americans gained currency as the nation struggled to change during the post-World War II civil Rights movement. To many, among them congressman James Scheuer, a Democrat from New York, the Civil Rights struggle should also broaden American education to include the presence and contributions of blacks. In 1966, congress created a commission to study the feasibility of a National Negro History Museum. Though there were concerns raised by the fledgling African American museums and art galleries in numerous urban centers that a national presence may hurt their efforts, many leading African American figures testified in support of this museum-baseball legend Jackie Robinson, Betty Shabazz, widow of Malcolm X, the author James Baldwin, to name only a few. Just as the commission moved forward, Dr. Martin Luther King Jr. was assassinated in 1968, and the nation's gaze turned away from the creation of a cultural institution.

The idea for a national presence lay fallow until the mid-1990s when an African American businessman who created the most successful tour mobile company in the nation's capital, Tom Mack, contacted Congressman Mickey Leland to campaign for a national museum on the Mall. soon joined by civil Rights hero, John Lewis, Leland began to push for legislation that would create a stand-alone black museum. Time and time again, the bills failed to work their way through the legislative process. In the early 1990s, a bill passed the House of Representatives, but was squashed in 1993 when Senator Jesse Helms prevented it from receiving a vote in the senate. After Leland's death in 1989, congressman Lewis, working with a group of congressional colleagues, introduced legislation that seemed destined to failure every year.

Two years after the NMAAHC was established, Bunch and his staff finally had a physical home, which, fittingly, required a rather abrupt entry.

After being rootless my first week back at the Smithsonian in July of 2005, I was excited to learn that I had been given offices in L’Enfant Plaza, a hotel and office complex a quarter of a mile removed from the National Mall, but tantalizingly close enough to serve as a constant reminder of what could be accomplished with creativity, unrelenting effort, and a bit of luck. So, one morning the entire staff, all two of us - Tasha Coleman and myself - walked up the hill, anxious to see the space we would call home and the offices that would be the seat of our planning, praying, and plotting for the next several years. Winding our way through the hotel lobby, we took the elevator to the seventh floor and soon found ourselves grinning as we stood in front of the doors to Suite 7102.

Our happiness was short lived as the doors were locked. We then went to the hotel desk and explained that I was the director of the newest Smithsonian museum and I needed the key to our offices. After several blank stares we were told we never heard of you and we cannot provide you access to the suite. Undeterred, we then sought out the security office and explained our situation. Unfortunately, it immediately became apparent that being a museum director did little to impress the security force. They refused to help and, in fact, looked at us as if were we pulling a scam, as if there was some hidden treasure just waiting for us in empty office space. Maybe I should have worn a tie. Anyway, after knocking on a few more doors and being unable to interest anyone in helping us with our plight, we walked back to Suite 7102 and just stared at the locked doors, like two forlorn waifs. What did we next see but a member of the maintenance staff who was just happening to pass by with his cart loaded with tools. Drawing on skills I still had from growing up in North Jersey, I talked him into loaning us a crowbar. We used it to break in, and though the door frame was permanently damaged, at least we were in.