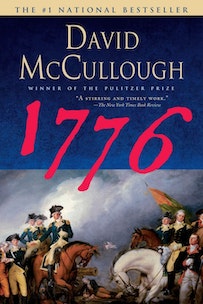 Purchase the book from Simon and Schuster.

Everything changed the day the Continental Congress issued the Declaration of Independence. What had been a series of clashes over the rights of Britain's North American subjects was transformed into a full-blown war to establish an independent nation. David McCullough's book 1776 captures American reactions in the immediate aftermath of the pronouncement, as the enormity of the action becomes clear.

In Philadelphia, the same day as the British landing on Staten Island, July 2, 1776, the Continental Congress, in a momentous decision, voted to 'dissolve the connection' with Great Britain. The news reached New York four days later, on July 6, and at once spontaneous celebrations broke out. 'The whole choir of our officers... went to a public house to testify our joy at the happy news of Independence. We spent the afternoon merrily,' recorded Isaac Bangs.

A letter from John Hancock to Washington, as well as the complete text of the Declaration, followed two days later: That our affairs may take a more favorable turn [Hancock wrote], the Congress have judged it necessary to dissolve the connection between Great Britain and the American colonies, and to declare them free and independent states; as you will perceive by the enclosed Declaration, which I am directed to transmit to you, and to request you will have it proclaimed at the head of the army in the way you shall think most proper.

Many, like Henry Knox, saw at once that with the enemy massing for battle so close at hand and independence at last declared by Congress, the war had entered an entirely new stage. The lines were drawn now as never before, the stakes far higher. 'The eyes of all America are upon us,' Knox wrote. 'As we play our part posterity will bless or curse us.'

By renouncing their allegiance to the King, the delegates at Philadelphia had committed treason and embarked on a course from which there could be no turning back.

'We are in the very midst of a revolution,' wrote John Adams, 'the most complete, unexpected and remarkable of any in the history of nations.'

In a ringing preamble, drafted by Thomas Jefferson, the document declared it 'self-evident' that 'all men are created equal,' and were endowed with the 'unalienable' rights of 'life, liberty, and the pursuit of happiness.' And to this noble end the delegates had pledged their lives, their fortunes, and their sacred honor.

Such courage and high ideals were of little consequence, of course, the Declaration itself being no more than a declaration without military success against the most formidable force on earth. John Dickinson of Pennsylvania, an eminent member of Congress who opposed the Declaration, had called it a 'skiff made of paper.' And as Nathaniel Green had warned, there were never any certainties about the fate of war.

But from this point on, the citizen-soldiers of Washington's army were no longer to be fighting only for the defense of their country, or for their rightful liberties as freeborn Englishmen, as they had at Lexington and Concord, Bunker Hill and through the long siege at Boston. It was now a proudly proclaimed, all-out war for an independent America, a new America, and thus a new day of freedom and equality."