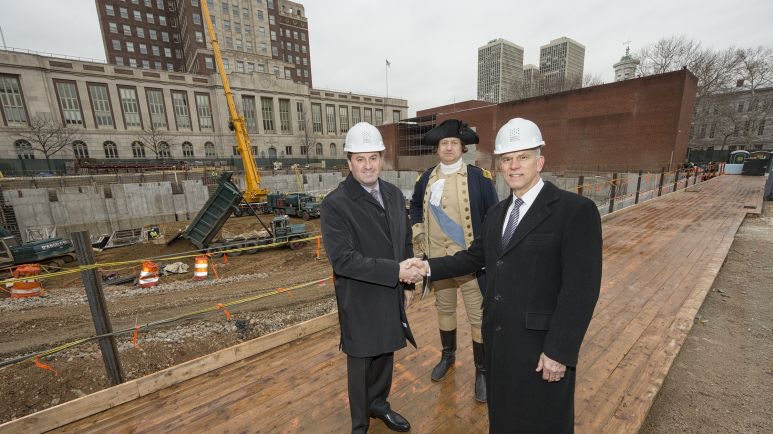 PHILADELPHIA– February 13, 2015 – With George Washington looking on, the Museum of the American Revolution today announced a gift of $250,000 from Wawa. Said Michael Quinn, Museum of the American Revolution President and CEO, “We are honored to have Wawa—a company whose roots in our region date to before the Revolutionary era—join as a major supporter. We are most grateful for Wawa’s generous gift as we work to bring to life the extraordinary story of our nation’s founding.”

Wawa CEO Christopher Gheysens said, “We are thrilled about this new partnership with the Museum of the American Revolution, as we are passionate about helping to commemorate and honor the great history of our country. This partnership is particularly significant as we have deep roots in American business that trace back even before the American Revolution, when the Wood family, Wawa’s founding family, settled in Philadelphia in 1683. Supporting the Museum perfectly aligns with our past, present and future commitment to fulfill lives every day.”

With this gift the Museum has secured more than $107 million toward the $120 million cost to open the Museum of the American Revolution, set to open in Philadelphia in 2017. The Museum’s campaign goal of $150 million includes $30 million for endowment and an operating reserve.

The Museum of the American Revolution, now under construction just steps from Independence Mall, will tell the complete story of the American Revolution using its distinguished collection of objects, artifacts, artwork, and manuscripts. The Museum will serve as a portal to the nation’s many Revolutionary sites, sparking interest, providing context and encouraging explorations that begin at the Museum’s doorstep. The Museum is a private, non-profit organization. For more information, visitwww.AmRevMuseum.org or call toll free, 877-740-1776.

Wawa, Inc., a privately held company, began in 1803 as an iron foundry in New Jersey. Toward the end of the 19th Century, owner George Wood took an interest in dairy farming and the family began a small processing plant in Wawa, PA in 1902. The milk business was a huge success, due to its quality, cleanliness and “certified” process. As home delivery of milk declined in the early 1960’s, Grahame Wood, George’s grandson, opened the first Wawa Food Market in 1964 as an outlet for dairy products. Today, Wawa is your all day, every day stop for fresh, built-to-order foods, beverages, coffee, fuel services, and surcharge-free ATM's. A chain of over 680 convenience retail stores (420 offering gasoline), Wawa stores are located in Pennsylvania, New Jersey, Delaware, Maryland, Virginia and Florida. The stores offer a large fresh food service selection, including Wawa brands such as built-to-order hoagies, freshly-brewed coffee, hot breakfast sandwiches, built-to-order Specialty Beverages, and an assortment of soups, sides and snacks.