PHILADELPHIA, Jan. 12, 2017 — A sword that belonged to General Hugh Mercer, a fallen hero of the American Revolution and a close friend of George Washington, was presented to the Museum of the American Revolution by the St. Andrew’s Society of Philadelphia at a ceremony today, Jan. 12, the 240th anniversary of Mercer’s death. The sword will be on display at the new Museum when it opens to the public on April 19, 2017. 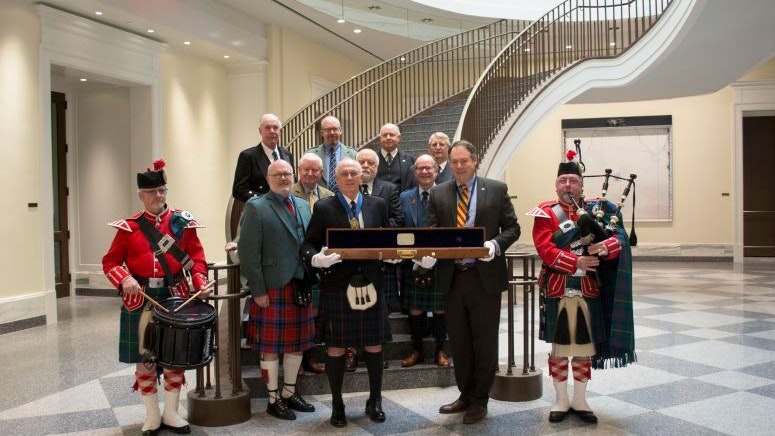 The St. Andrew’s Society of Philadelphia, named in honor of Scotland’s patron saint, was founded in 1747 and is believed to be the oldest charitable membership organization in continuous existence in North America. Born in Scotland, but eventually settling in what is now Mercersburg, Pennsylvania, General Mercer was a member of the Society. His sword is one of the Society’s prized possessions, and his tomb at Philadelphia’s Laurel Hill Cemetery has been cared for by the Society since his remains were relocated there in 1840.

General Mercer was mortally wounded at the Battle of Princeton, January 3, 1777. Mercer died in the Thomas Clarke House (now a museum) at Princeton, nine days after the battle ended in victory for the Continental Army. His body was laid out at Philadelphia’s City Tavern the day before his internment to allow mourners to pay their final respects.

When the Museum opens, General Mercer’s sword will be located in a gallery dedicated to the ten crucial days that included the Battles of Trenton and Princeton. It will also feature a British bayonet, marked with an indication that it belonged to the 17th Regiment of Foot. Perhaps captured during the Revolution, the bayonet descended through a New England family.

Alongside the sword and bayonet, the Museum will display The Battle of Princeton, a painting by William Mercer, General Mercer’s son. It is on loan from the Philadelphia History Museum at Atwater Kent. William Mercer was a boy when his father was killed. He later studied painting under Charles Willson Peale, and produced this copy of James Peale’s image of the battle, which depicted the elder Mercer’s death in the background.

The gallery also features a graphic from American artist John Trumbull’s painting, The Death of General Mercer at the Battle of Princeton, January 3, 1777, which is owned by the Yale University Art Gallery. The painting shows General Mercer defending himself with his sword against a bayonet charge of the British 17th regiment of foot.

The Museum of the American Revolution, which opens in the heart of historic Philadelphia on April 19, 2017, will explore the dynamic story of the American Revolution using its expansive collection of Revolutionary-era weapons, personal items, documents, and works of art. Immersive galleries, dynamic theaters, and recreated historical environments will bring to life the events, people, and ideals of our nation’s founding and engage people in the history and continuing relevance of the American Revolution. Located just steps away from Independence Hall, Carpenters’ Hall, and Franklin Court, the Museum will serve as a portal to the region’s many Revolutionary sites, sparking interest, providing context, and encouraging exploration. The Museum is a private, non-profit, and non-partisan organization. For more information, visit www.AmRevMuseum.org or call 877.740.1776.