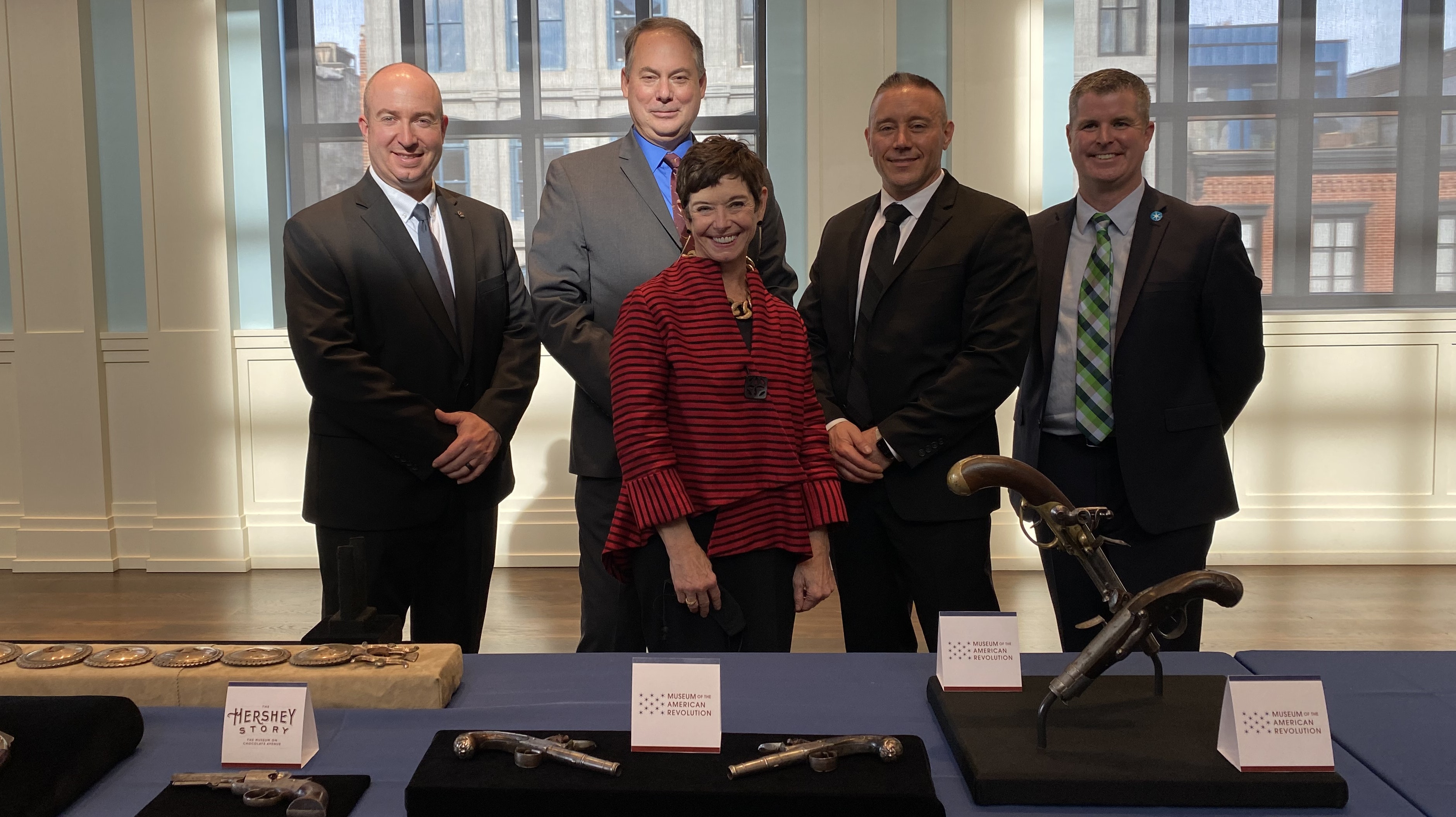 Representatives from the Federal Bureau of Investigation Art Crime Team - Philadelphia Division, the United States Attorney’s Office of the Eastern District of Pennsylvania, Upper Merion Township Police Department, and the Museum of the American Revolution stand with the recovered artifacts.

Stolen artifacts were returned to their rightful owners—six museums from the Philadelphia region—today in a repatriation ceremony held by the Federal Bureau of Investigation Art Crime Team - Philadelphia Division at the Museum of the American Revolution.

The artifacts were recovered through the efforts of the Federal Bureau of Investigation Art Crime Team - Philadelphia Division, the United States Attorney’s Office of the Eastern District of Pennsylvania, and the Upper Merion Township Police Department. 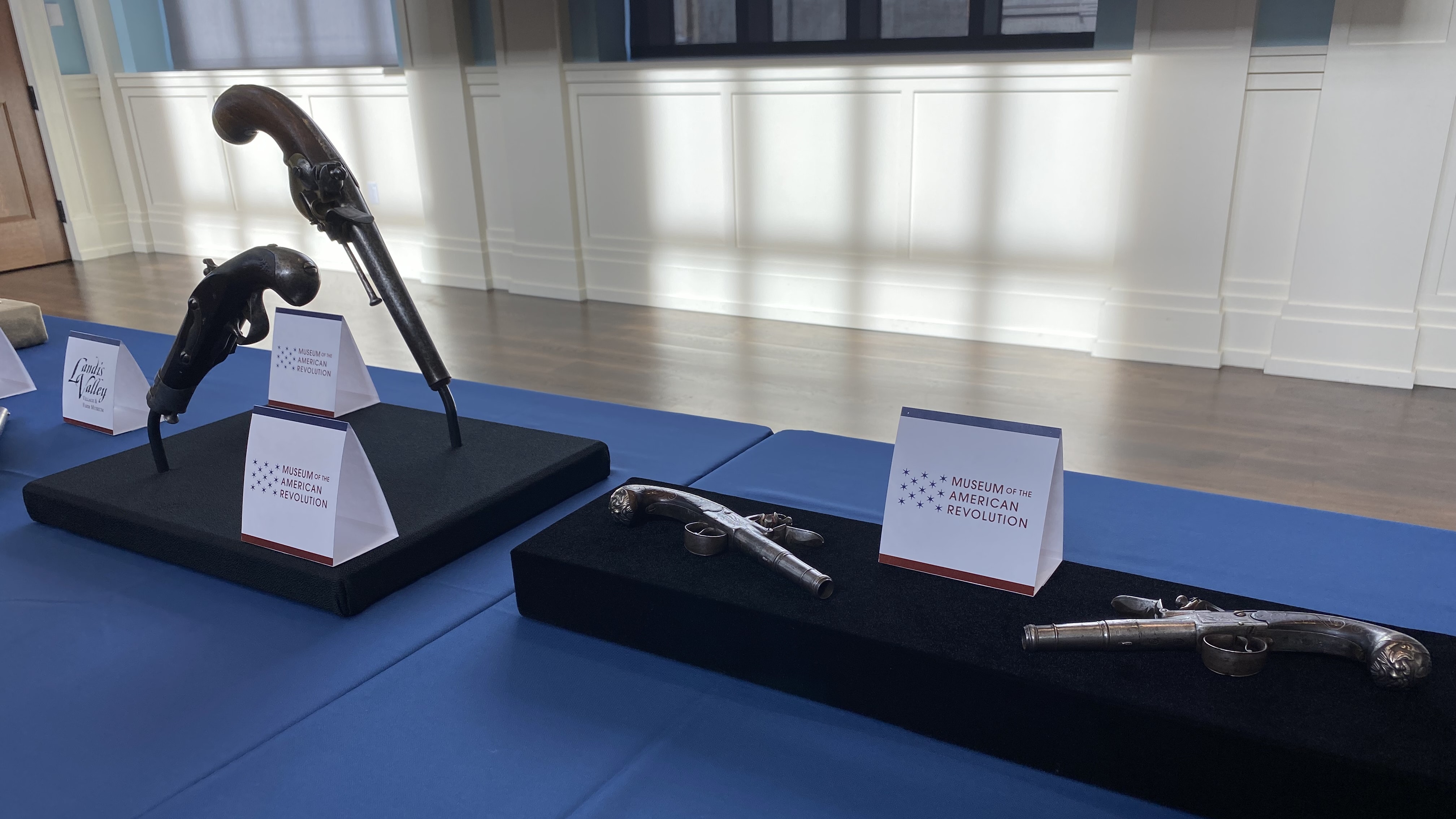 The Museum of the American Revolution received four pistols that were stolen from the Valley Forge Historical Society.

“It is incredibly significant and exciting for us to be joined by all of these local institutions today and to see them reunited with objects that have been missing for half a century,” said Dr. R. Scott Stephenson, President and CEO of the Museum of the American Revolution. “Our collections are used as tools to engage our audiences in an appreciation of history and to reinvigorate their civic commitment – it’s the foundation of all of our missions. We are incredibly grateful to the FBI and law enforcement for their tireless work to bring these items home.”

The museums that received repatriated items include the American Swedish Historical Museum, Hershey Story Museum, Landis Valley Museum, Mercer Museum, Museum of the American Revolution, and York County History Center. The 15 total items that were repatriated were primarily historic firearms from the 18th and 19th century, including rifles and pistols, and a Native American concho belt. 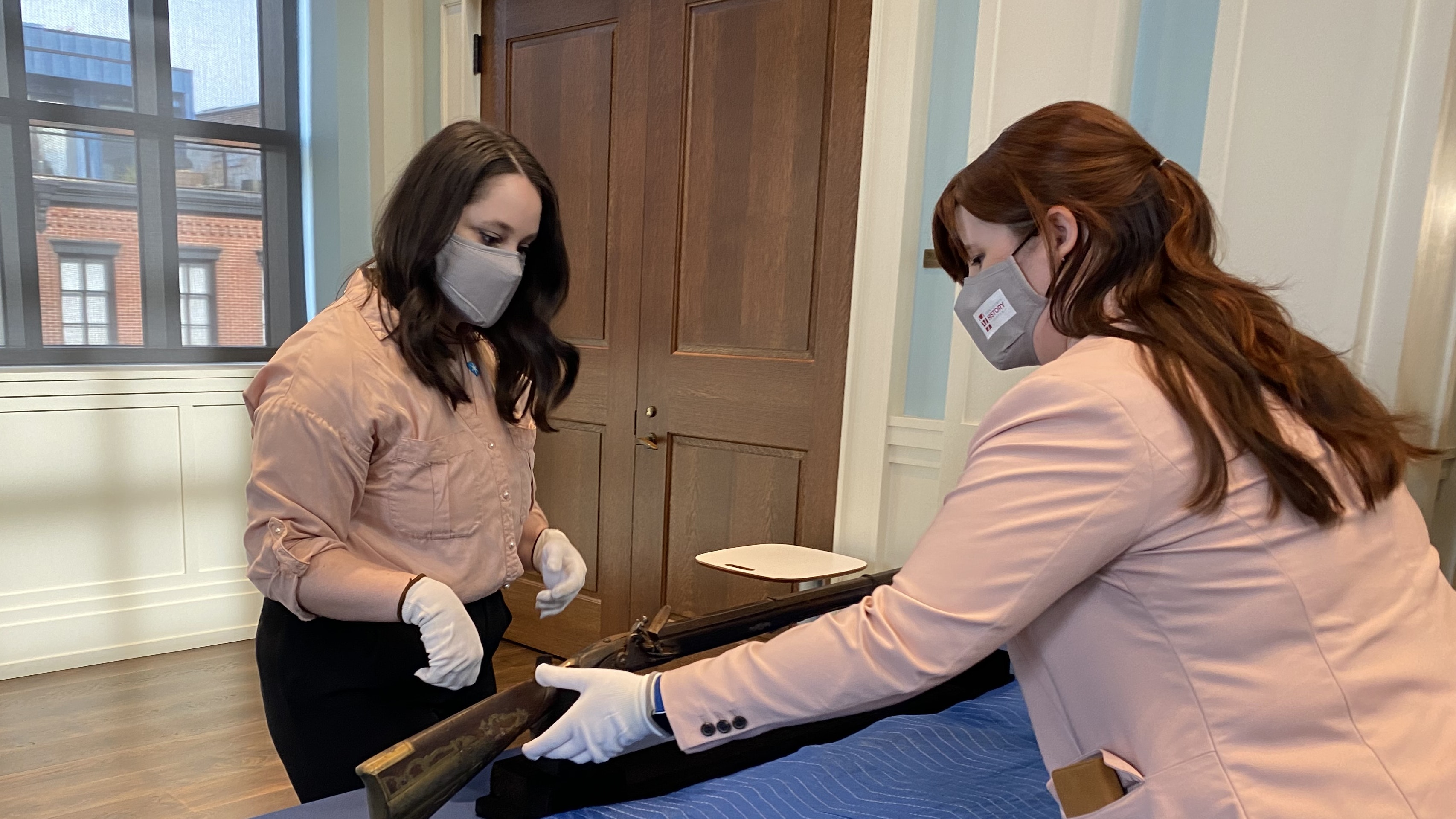 “In law enforcement, as in any profession, there are good days and bad days. Today, standing here along with our partners, is one of those good days,” said Jacqueline Maguire, Special Agent in Charge of the FBI’s Philadelphia Division. “The absence of the items from these museums represented not just a physical or financial loss, but a loss to every visitor, every student, and every researcher who didn’t get to see the items over the years and missed out on important pieces of our nation’s heritage. The absence of these items was, for so long, a loss to the historical record. The FBI is honored to have helped correct that loss and return these artifacts to the institutions from which they were stolen so long ago.”

Through the repatriation, the Museum of the American Revolution received a French gendarmerie flintlock pistol and a pair of Ward & Steele Queen Anne flintlock pistols, which were stolen in 1970, and a French Model 1777 Charleville pistol, which was stolen in 1972. The items were stolen from the Valley Forge Historical Society, which transferred its distinguished collection to the Museum in 2003. Museum President and CEO Dr. R. Scott Stephenson stands with items that were repatriated to the Museum.

The recovered artifacts were part of a 50-year-old cold case that was cracked by the FBI in 2019 and included the return of a rare firearm made by gunsmith Christian Oerter, which was stolen in 1971 when it was on display at Valley Forge Park. The rifle, which is on loan from the Pennsylvania Society of Sons of the Revolution and its Color Guard (PSSR), is now on display in the Museum of the American Revolution’s special exhibition Liberty: Don Troiani’s Paintings of the Revolutionary War, which is on view through Sept. 5, 2022.

Thomas Gavin, who was convicted this summer of stealing the artifacts in the 1960s and 1970s, was recently sentenced to one day in prison.