PHILADELPHIA, Feb. 1, 2018 — Think romance is history? So does the Museum of the American Revolution. On Tuesday, Feb. 20 from 5 – 8 p.m., the Museum will host a love letter-themed evening that will explore the stories of Revolutionaries who wrote romantic letters, went on dates, and carved “busks” for their sweethearts to wear close to their hearts. Enjoy live music from a strolling violinist and have an artist capture your likeness in a silhouette to take home. 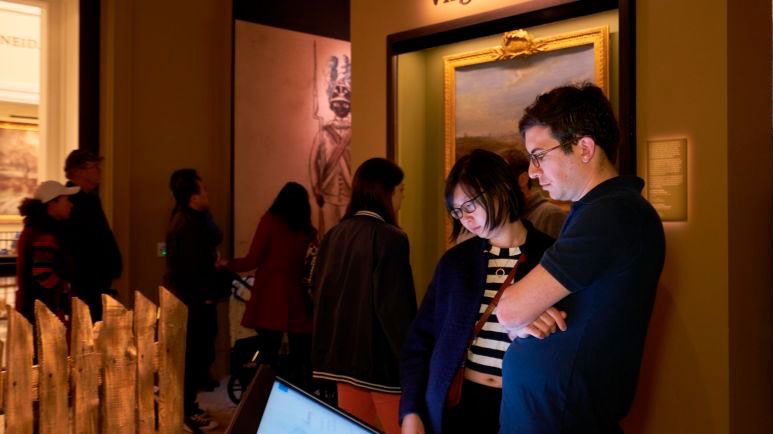 The evening is part of the Museum’s History After Hours series, which features extended evening hours from 5 – 8 p.m. on one evening of each month. The events include special themed programs, happy hour food and drink specials in Cross Keys Café from 5 – 7 p.m., and full access to the Museum’s exhibits. Tickets for History After Hours are $10 and can be purchased online in advance here or at the door.

Try your hand at writing a Revolutionary-era letter with a quill pen and ink, and learn more about secret messages and jokes used in “rebus puzzles” – the 18th-century equivalent of emoji. Make a bookmark inspired by the wooden busk (piece of a woman’s corset) that was intricately carved with Revolutionary imagery and the phrase “We Are One” by an American prisoner-of-war for his sweetheart and is on display in the Museum’s exhibits. Learn the classic English card game whist, try on Revolutionary-era inspired clothing, and pose for photos with a costumed historical interpreter.

Looking ahead, during Tuesday, March 6’s History After Hours event, visitors will learn about the Fierce Females who rolled cartridges, sewed flags, and even disguised themselves as soldiers to fight in the Revolutionary War. Author Alex Myers will join the Museum to discuss his novel Revolutionary, called “a remarkable novel” by The New York Times. The book explores the life of America’s first female soldier, Deborah Sampson, who ran away from home in 1782, successfully disguised herself as a man, and fought valiantly in the Revolutionary War.