Painting Was Commissioned by the Museum of the American Revolution

A new painting, titled “Brave Men as Ever Fought,” by nationally renowned historical artist Don Troiani was unveiled by the Museum of the American Revolution today at The African American Museum in Philadelphia. The painting depicts a little-known moment from the Revolutionary War that took place exactly 240 years ago today.

In the painting, young African American sailor James Forten—later a stalwart in anti-slavery and abolitionist movements—looks on as Black and Native American troops in the ranks of the Continental Army’s Rhode Island Regiment march west through Philadelphia on September 2, 1781, Forten’s 15th birthday. The troops, on their way to Yorktown, Virginia, kicked up clouds of dust as they marched past crowds of Philadelphia residents lining Chestnut Street in front of the brick façade of the Pennsylvania State House (now known as Independence Hall).

“James Forten embodied so many characteristics we admire as Americans— he was brave and entrepreneurial; he overcame great adversity, prejudice, and loss; and he was dedicated to family, community, and nation,” said Dr. R. Scott Stephenson, President and CEO of the Museum of the American Revolution. “He was admired and well known by his fellow Philadelphians, but he is not widely remembered today. We are honored to work with our partners at the National Park Service and the AAMP to ensure that James Forten—and all the Revolutionary Generation to whom we owe an unpayable debt of gratitude—remain in our hearts.”

The painting was commissioned by the Museum of the American Revolution and funded by the National Park Service Washington-Rochambeau Revolutionary Route National Historic Trail.

“‘Brave Men as Ever Fought’ brings to light one of the often-untold stories of the American Revolution and illustrates the crucial role that African Americans played in our quest for freedom,” said Johnny Carawan, National Park Service Washington Rochambeau Revolutionary Route National Historic Trail Administrator. “The 1st Rhode Island Regiment is connected to the Trail and woven into the fabric of our country. The National Park Service is proud to support this project to help shine a light on the heroic achievements of these men.” "Brave Men as Ever Fought” will be on view at The African American Museum in Philadelphia from September 2 – October 3, 2021. To dig deeper into Forten’s story, visitors can explore his story in the museum’s permanent exhibition “Audacious Freedom.” It will then be featured in the Museum of the American Revolution’s special exhibition Liberty: Don Troiani’s Paintings of the Revolutionary War, which runs from October 16, 2021 – September 5, 2022.

Following the exhibit, it will remain in the Museum of the American Revolution’s collection. Beginning Sept. 2, visitors can save up to $6 off individual admission to each museum by showing their ticket stubs from the other museum at the front desk. Reduced parking rates at AAMP are also available upon request. Visit each museum’s website to confirm admission rates and hours of operations.

“This story of James Forten personalizes and deepens Philadelphia’s connection to the Revolutionary War,” said Ivan Henderson, Vice President of Programming for The African American Museum in Philadelphia. “At AAMP, we work to illuminate the often-overlooked experiences of African Americans like Forten in history. We’re proud to partner with the Museum of the American Revolution and the National Park Service to display ‘Brave Men as Ever Fought’ and bring this pivotal moment to light.”

Shortly after witnessing the moving scene depicted in the painting, James Forten returned to sea where he was captured with the crew of an American privateer ship and taken prisoner on an infamous British prison ship, the Jersey. There he planned a daring escape but gave up his spot at the last minute to a friend and fellow prisoner. Forten eventually returned to Philadelphia where he learned the sail-making trade and became a successful businessman. He was a leading advocate for the rights and liberties of fellow people of color, including using his own money to free enslaved people and campaigning to abolish slavery.

In February 1831, nearly 50 years after seeing men of color in the Continental Army march through Philadelphia on their way to Yorktown, a 64-year-old Forten penned a letter to his friend and fellow abolitionist William Lloyd Garrison, reflecting on the moment that Don Troiani has depicted in the painting. Forten wrote, “I well remember that when the New England Regiment passed through this city on their way to attack the English Army under the command of Lord Cornwallis, there was several Companies of Coloured People, as brave Men as ever fought.”

The Rhode Island Regiment, which Forten referred to in his 1831 letter, included two companies entirely made up of private soldiers of African and Native American ancestry led by white officers. The racial segregation by company in the Rhode Island Regiment was a rare practice in the Continental Army. Most men of color in other regiments of the army served in integrated companies, standing shoulder-to-shoulder with white private soldiers.

A first-person theatrical performance about Forten’s life, written by a local African American playwright and performed by African American actors, will accompany the Museum of the American Revolution’s upcoming special exhibition Liberty: Don Troiani’s Paintings of the Revolutionary War and engage school groups and other Museum visitors. 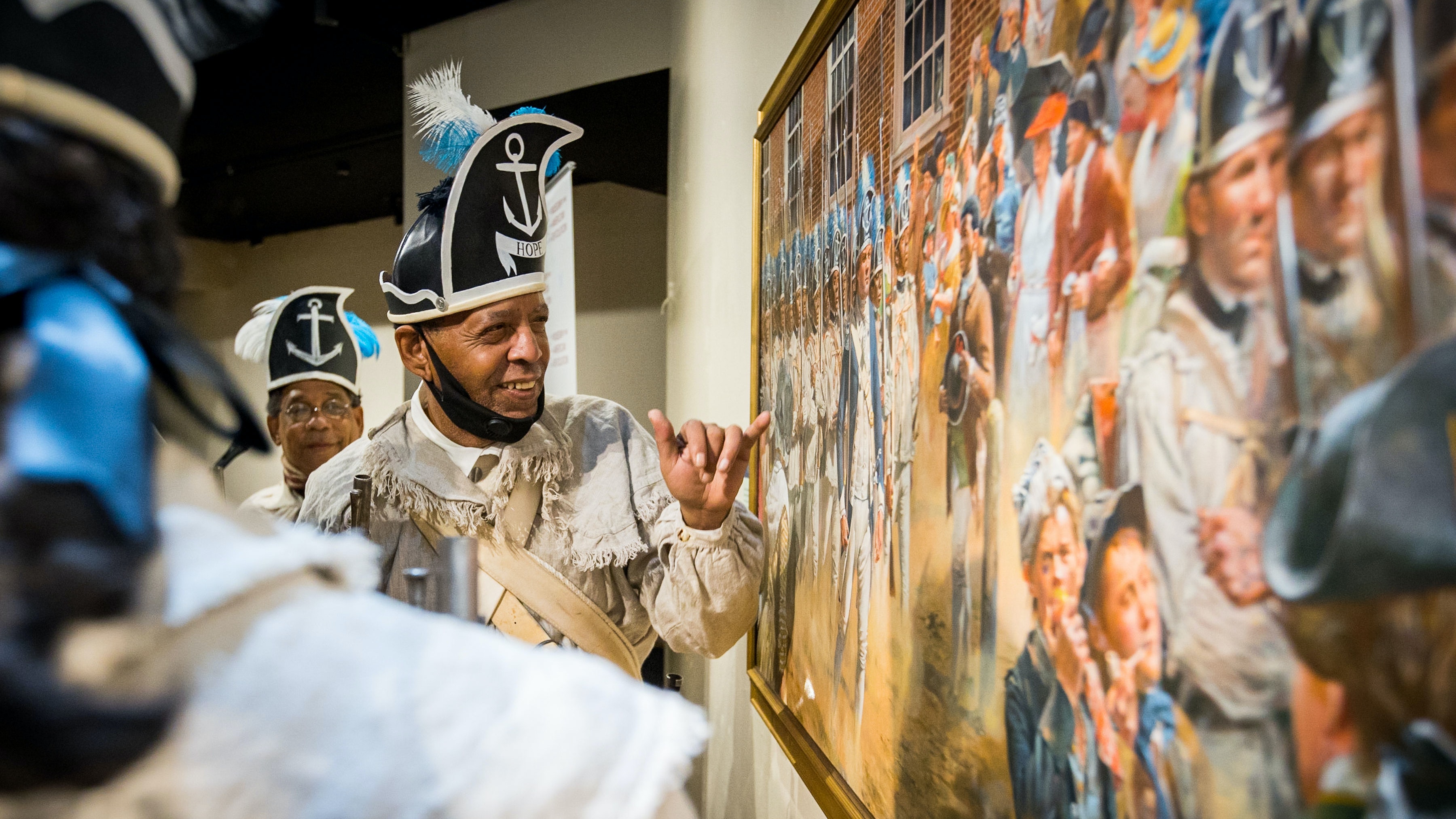 Historical interpreter Algernon Ward points to himself in the painting.

About Liberty: Don Troiani’s Paintings of the Revolutionary War
What did the Revolutionary War really look like? Nationally renowned historical artist Don Troiani aims to answer this question, drawing from painstaking research to create paintings that capture the drama and reality of life on the march, in camp, and in battle. Over 40 of Troiani’s original paintings and dozens of artifacts from his personal collection—most on display for the first time in public—will plunge visitors into some of the most pivotal moments of America’s fight for independence, from the Battles of Lexington and Concord to the Siege of Yorktown. The exhibit runs from October 16, 2021 through September 5, 2022 at the Museum of the American Revolution and is included with regular Museum admission.

About The African American Museum in Philadelphia
Founded in 1976 in celebration of the nation’s bicentennial, the African American Museum in Philadelphia is the first institution funded and built by a major municipality to preserve, interpret, and exhibit the heritage of African Americans. The mission of the museum is to bring together diverse communities in a greater appreciation of the Black experience through the combined narrative of art, history, and culture. Throughout its evolution, the museum has objectively interpreted and presented the achievements and aspirations of African Americans from pre-colonial times to the current day. To learn more, visit www.aampmuseum.org or call at 215.574.0380.