Complementing the Exhibit, Washington’s Diamond Eagle of the Society of the Cincinnati is on Display Through March 4

PHILADELPHIA, DEC. 13, 2017 — On Jan. 13, the Museum of the American Revolution will unveil a newly discovered watercolor painting from the Revolutionary War as the centerpiece of a limited-run exhibit from Jan. 13 – Feb. 19, 2018. The 235-year-old, seven-foot panoramic painting depicts the Continental Army’s 1782 encampment at Verplanck’s Point in New York’s Hudson Valley. It includes the only known depiction of General George Washington’s headquarters tent in the field – the very tent that is dramatically presented at the Museum.

“We have no photographs of this army, and suddenly here is the equivalent of Google Street View,” Dr. Philip Mead, Chief Historian and Director of Curatorial Affairs for the Museum, told the New York Times of discovering the painting. “Looking at it, you feel like you are walking right into the past.”

The exhibit, entitled Among His Troops: Washington’s War Tent in a Newly Discovered Watercolor, will bring together works of art, weapons, and other artifacts from the Revolutionary War to explore the history surrounding this rare eyewitness painting of the Continental Army, which was discovered by the Museum’s curators. Among His Troops will include hands-on activities for families, gallery talks, and a series of public lectures. It is open from 11 a.m. – 5 p.m. daily and is free with regular museum admission. 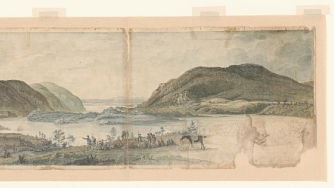 Visitors will learn about the detective work conducted by the Museum’s curators to identify the watercolor and its artist, Pierre L’Enfant. A French-born American military engineer, L’Enfant is best known as the master planner of Washington, D.C. The newly discovered watercolor will be displayed next to L’Enfant’s only other known panoramic painting of the Continental Army, which depicts West Point in 1782, on loan from the Library of Congress. Together, these paintings provide visitors with a glimpse into the relatively unknown period following the 1781 British surrender at Yorktown, Virginia, as the Revolutionary War continued to rage. The exhibit tells the stories of the officers, female camp followers, and African American soldiers who continued the fight for independence as they encamped in the Hudson Valley in 1782.

Complementing the exhibit, from Dec. 6 – March 4, visitors will have the rare opportunity to view the Diamond Eagle of the Society of the Cincinnati on the Museum’s second floor. The diamond-encrusted emblem was owned and worn by George Washington as the first president general of the Society. It was presented to Washington in Philadelphia in 1784 but has never been exhibited in the city. The Society’s insignia — a gold Eagle suspended from a blue and white ribbon – was designed by Pierre L’Enfant, the artist who painted the watercolor. 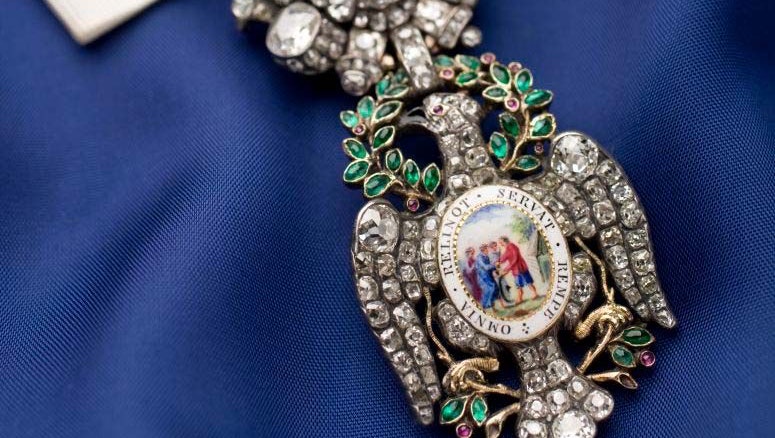 Diamond Eagle. Courtesy of the Society of the Cincinnati.

The 2,500 square-foot exhibit will be located in the Museum’s first-floor Patriots Gallery. An adjacent activity space will feature replica soldiers’ tents that visitors can climb inside, and replicated furniture from Washington’s tent, including his bed, stools, and accoutrements, for visitors to explore Washington’s day-to-day experience as Commander-in-Chief of the Continental Army. Guests can try on Revolutionary-inspired clothing, design their own symbols like those used by units of the Continental Army, learn how to drill like a soldier, and more.

In Addition to the Verplanck’s Point Watercolor, Key Artifacts on Display Include:

Admission to the exhibit is free with regular museum admission. Museum tickets can be purchased here and are $19 for adults; $17 for seniors, students, and active or retired military; and $12 for children ages 6 and up. Children ages 5 and under are free. All tickets are valid for two consecutive days. Group tickets for parties of 15 or more are currently available for a reduced price by calling 267.858.3308. Memberships are also available for purchase here or by calling 215.454.2030.

WHAT:      Among His Troops: Washington’s War Tent in a Newly Discovered Watercolor
WHO:            For only five weeks, the Museum of the American Revolution presents a newly
discovered 235-year-old, seven-foot panoramic painting that offers an invaluable
glimpse into the Revolutionary War. The exhibit will bring together works of art,
weapons, and other artifacts from the Revolutionary War to explore the history
surrounding this remarkable discovery by the Museum’s curators.
WHERE:      Museum of the American Revolution, Patriots Gallery
101 S. Third St. Philadelphia, PA 19106
WHEN:         Jan. 13 – Feb. 19, 11 a.m. – 5 p.m. (The Museum opens at 10 a.m.)
HOW:            Free with regular museum admission, tickets are available at www.amrevmuseum.org,
215-253-6731, or at the front desk