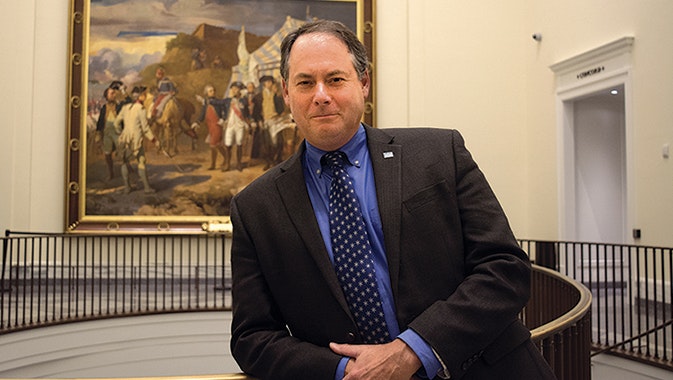 Museum of the American Revolution President and CEO Dr. R. Scott Stephenson was named as a 2022 Philadelphia Titan 100. The Titan 100 program recognizes 100 CEOs and C-level executives in Philadelphia. The recipients represent some of the area’s most accomplished leaders in their industries who have demonstrated exceptional leadership, vision, and passion. The full list of recipients is available here.

Collectively the 2022 Philadelphia Titan 100 and their companies employ upwards of 70,000 individuals and generate over $14 billion dollars in annual revenue. This year’s honorees will be profiled in a Titan 100 book and online. They will be honored at an awards ceremony on September 8 at The Drexelbrook located in Drexel Hill, PA.

"The Titan 100 are shaping the future of the Philadelphia’s business community by building a distinguished reputation that is unrivaled and preeminent in their field,” said Jaime Zawmon, President of Titan CEO. “We proudly recognize the Titan 100 for their successes and contributions. We know that they will have a profound impact that makes an extraordinary difference for their customers and clients across the nation.”

Dr. R. Scott Stephenson has served as President and CEO of the Museum of the American Revolution in Philadelphia since 2018. From 2007-2018, Stephenson led the development of the Museum’s award-winning exhibitions, multimedia experiences, and educational programming, as well as overseeing the care and expansion of its rich collection of art and artifacts, first as Founding Director of Collections and Interpretation and then as Vice President of Collections, Exhibitions, and Programming. He served as a key member of the senior leadership team that raised $173 million to build and open the Museum, surpassing the capital campaign goal of $150 million. He holds a B.A. from Juniata College, and an M.A. and Ph.D. in American History from the University of Virginia.