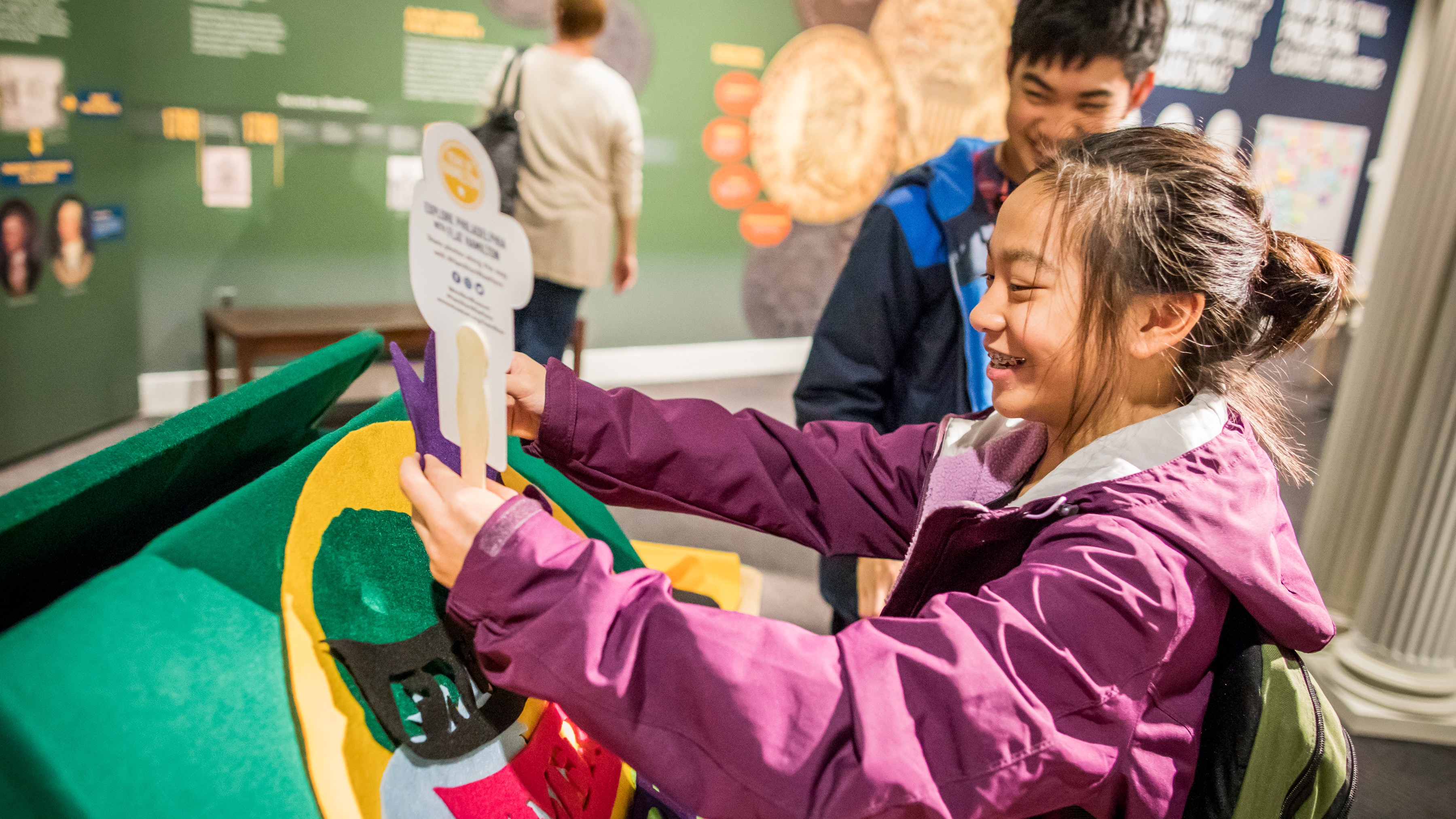 Hamilton Was Here featured interactive activities for all ages.

The American Association for State and Local History (AASLH) has announced that the Museum of the American Revolution is the recipient of a 2020 Award of Excellence for its 2018-19 exhibit Hamilton Was Here: Rising Up in Revolutionary Philadelphia.

The AASLH Leadership in History Awards, now in its 75th year, is the most prestigious recognition for achievement in the preservation and interpretation of state and local history. The Museum previously won for its core exhibition in 2018 and for its family-friendly discovery center, Revolution Place, in 2019.

In Hamilton Was Here, the Museum highlighted the surprising connections between the city of Philadelphia and Alexander Hamilton’s extraordinary contributions to the nation’s founding. Through playful activities, scenic environments, and interactive games, visitors actively engaged in the challenges of founding and maintaining a country as they followed Hamilton’s story through different locations in Philadelphia and the surrounding region.

In addition to the exhibit, the Museum launched a "Year of Hamilton," which included a range of special events and programs dedicated to exploring Hamilton’s life and legacy. Over the course of the year, the Museum’s core exhibition featured nearly 30 artifacts related to Alexander and Eliza Hamilton.

Visitors actively engaged in the challenges of forming a new nation.

“We strive to tell the other side of each story – those that are lesser-known and often surprising. This experience was no exception,” said Dr. Philip Mead, Chief Historian and Director of Curatorial Affairs at the Museum. “Without Philadelphia, Alexander Hamilton might not have been the Alexander Hamilton we know today – his experiences in the city shaped his vision for the nation.”

This year, AASLH conferred 57 national awards honoring people, projects, exhibits, and publications. The winners represent the best in the field and provide leadership for the future of state and local history.

The AASLH awards program was initiated in 1945 to establish and encourage standards of excellence in the collection, preservation, and interpretation of state and local history throughout the United States. The AASLH Leadership in History Awards not only honor significant achievement in the field of state and local history, but also bring public recognition of the opportunities for small and large organizations, institutions, and programs to make contributions in this arena. For more information about the Leadership in History Awards, contact AASLH at 615-320-3203, or go to www.aaslh.org.

The American Association for State and Local History is a not-for-profit professional organization of individuals and institutions working to preserve and promote history. From its headquarters in Nashville, Tennessee, AASLH provides leadership, service, and support for its members who preserve and interpret state and local history in order to make the past more meaningful to all people. AASLH publishes books, technical publications, a quarterly magazine, and maintains numerous affinity communities and committees serving a broad range of constituents across the historical community. The association also sponsors an annual meeting, regional and national training in-person workshops, and online training.