PHILADELPHIA, NOV. 7, 2016 — A realistic recreation of America’s first Liberty Tree was recently installed in the new Museum of the American Revolution, one of several immersive environments that will bring to life the dramatic story of our nation's founding when the Museum opens on April 19, 2017. The nearly two-story tree is 18 feet tall and weighs 2,000 pounds.

During the decade preceding the Revolutionary War, Liberty Trees became gathering places where the first stirrings of revolt against the British empire were discussed and debated. 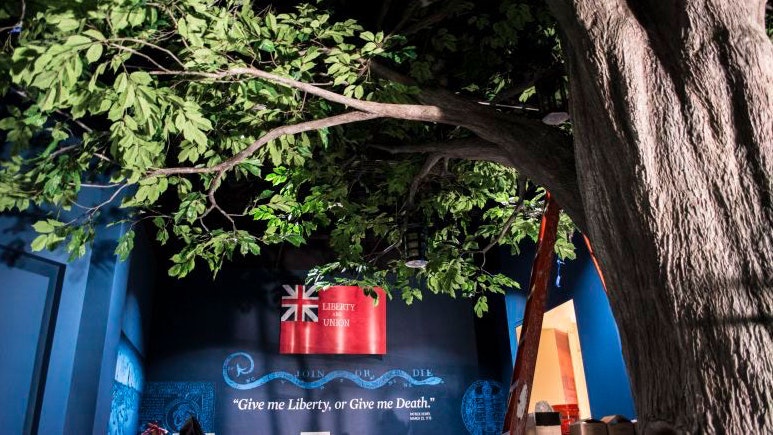 “In August of 1765, colonists who were protesting the British Parliament’s Stamp Act gathered around what became Boston’s Liberty Tree to begin public protests against British taxation. Many other towns adopted trees as gathering places for public protest,” said Dr. R. Scott Stephenson, Vice President of Collections, Exhibitions, and Programming for the Museum of the American Revolution. “Liberty Trees are an important part of the story of the American Revolution, with many of them still standing well into the 19th and 20th centuries.”

Visitors will be able to walk beneath the branches of the tree and feel transported back to the Revolutionary era. The Museum’s replica tree will feature recreated broadsides – or posters – like those that were posted on Liberty Trees with announcements, much like modern-day social media posts. Period reproduction lanterns made by tinsmiths at Colonial Williamsburg’s Public Armory will hang from the branches, evoking the atmosphere of historic Boston in 1766. 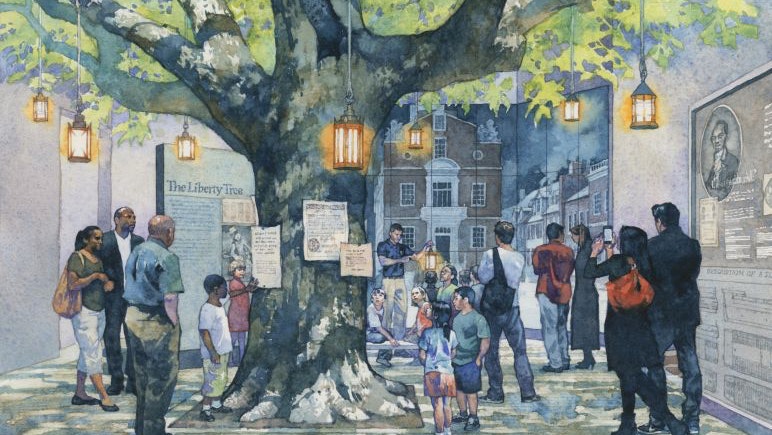 An actual piece of the Annapolis (Maryland) Liberty Tree, an ancient Tulip Poplar that sheltered Maryland colonists in 1775 and survived until 1999, is embedded in the replica tree as a touchable element.

The tree was created by Scenery First in Sharon Hill, Pa., a subcontractor for the Museum’s exhibit fabricator Maltbie from Mount Laurel, NJ. It was designed by HealyKohler Design in Washington, D.C.

It was made with steel tubes covered in carved foam and and treated with an epoxy putty to mimic actual Elm bark. Nearly 24,000 Polyblend leaves were then applied to the branches. Once the modeling of the tree was complete, the entire tree was scenically painted and weathered to look like a realistic Elm tree.

The Liberty Tree gallery will explore other period symbols of American Liberty, such as Liberty Caps and Liberty Poles, through authentic artifacts and rich graphics.

The Museum of the American Revolution, which opens in the heart of historic Philadelphia on April 19, 2017, will explore the dynamic story of the American Revolution using its expansive collection of Revolutionary-era weapons, personal items, documents, and works of art. Immersive galleries, dynamic theaters, and recreated historical environments will bring to life the events, people, and ideals of our nation’s founding and engage people in the history and continuing relevance of the American Revolution. Located just steps away from Independence Hall, Carpenters’ Hall, and Franklin Court, the Museum will serve as a portal to the region’s many Revolutionary sites, sparking interest, providing context, and encouraging exploration. The Museum is a private, non-profit, and non-partisan organization. For more information, visit www.AmRevMuseum.org or call 877.740.1776.