Free Costumed Historical Intepreters and Storytellers on the Museum's Outdoor Plaza, $5 off Museum Admission for Veterans, Family-Friendly Activities and More 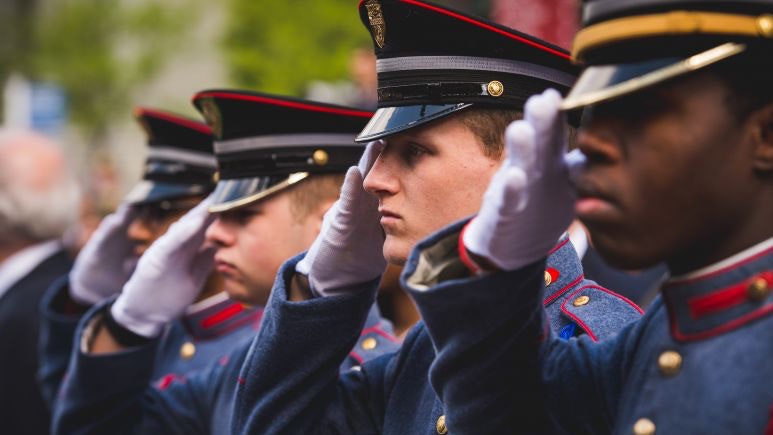 Highlights of the Museum’s artifacts and exhibits that explore these stories include the sword of fallen Revolutionary General Hugh Mercer; the gravestone of Maryland Captain Michael Cresap; and a leather cap that Captain-Lieutenant Benajah Carpenter was wearing when he was killed at the Battle of Brooklyn in August 1776, among many others. Visitors will receive a printed guide to these features.

Throughout the weekend, visitors are encouraged to post notes on a large panel in the Museum’s rotunda to express their gratitude to America’s servicemembers. Carnations will be available for visitors to place on the Tomb of the Unknown Soldier of the Revolution at Independence National Historical Park's Washington Square, which is located just two blocks from the Museum. In partnership with Friends of Independence National Historical Park, the Museum will collect donations to support maintenance of the Tomb.

“The Museum of the American Revolution tells the stories of many of our nation’s first fallen soldiers and honors those whose names we don’t know,” said Michael Quinn, Museum President and CEO. “The outcome of the American Revolution was never certain, but thousands of brave men and women were willing to take that risk in order to build an independent American nation. To this day, American servicemembers continue to put their lives on the line to preserve and protect the freedoms we all enjoy today. We can never repay the debt of gratitude we owe them.”

Artifacts and exhibits that explore the stories of those who lost their lives in service include:

Throughout the weekend, visitors also will meet costumed historical interpreters on the Museum’s outdoor plaza and participate in family-friendly activities, which will take place from 11 a.m. – 3 p.m. daily in the Museum’s first-floor Patriots Gallery. Guests can imagine what it meant to go to war in the Revolution by drilling like soldiers, trying on uniforms, and testing their survival skills by packing a knapsack to join the Continental Army. They also can design a flag and make a sash like the one worn by General George Washington to take home. Additionally, each visitor will receive a complimentary miniature version of General George Washington’s Standard flag, which marked his presence on the battlefield.

Beginning Memorial Day weekend, visitors also will learn about our nation’s history from Once Upon A Nation storytellers at their newest storytelling bench located in the Museum’s outdoor plaza. The engaging storytellers will bring to life the stories of James Forten, a free black 14-year-old who joined a privateer ship; Deborah Sampson, a woman who dressed as a man in order to fight in the Revolutionary War; and the Philadelphia beginnings to the relationship between Alexander Hamilton and Aaron Burr.

Veterans will receive $5 off admission throughout Memorial Day weekend (May 27-29). General admission tickets can be purchased here and are $19 for adults; $17 for seniors, students, and active or retired military; and $12 for children ages 6 and up. Children ages 5 and under are free. All tickets are valid for two consecutive days. Group tickets for parties of 15 or more are currently available for a discounted price by calling 267.858.3308. Memberships are also available for purchase at http://www.amrevmuseum.org/support/membership or by calling 215.253.6731.