Hundreds of friends and neighbors gathered today at the Museum of the American Revolution to celebrate the opening of the Museum’s outdoor plaza and dedicate its recently completed building to Board Chairman Gerry Lenfest and his wife Marguerite Lenfest. The Museum officially opens to the public on April 19, 2017. 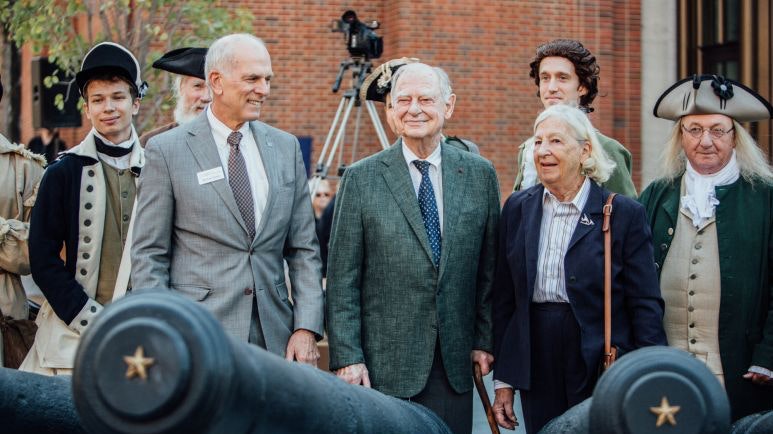 “This building is a physical testament to the inspiring vision, unwavering support, and tremendous generosity of Gerry and Marguerite Lenfest,” said Michael Quinn, President and CEO of the Museum of the American Revolution. “Gerry has been the Museum’s most steadfast advocate from the very beginning and we’re thrilled to be here today to name this beautiful building the Marguerite and Gerry Lenfest Building.”

Lenfest has served as Chairman of the Museum’s Board of Directors since 2005 and has contributed $50 million in matching grants toward the Museum’s $150 million campaign. The Museum has now raised $141 million from supporters across every state in the nation.

“The American Revolution brought this country into existence and it deserves a great national museum to honor that legacy,” said Lenfest. “I am honored to have helped make this vision a reality, and am so thankful to those who have joined me in supporting it.” 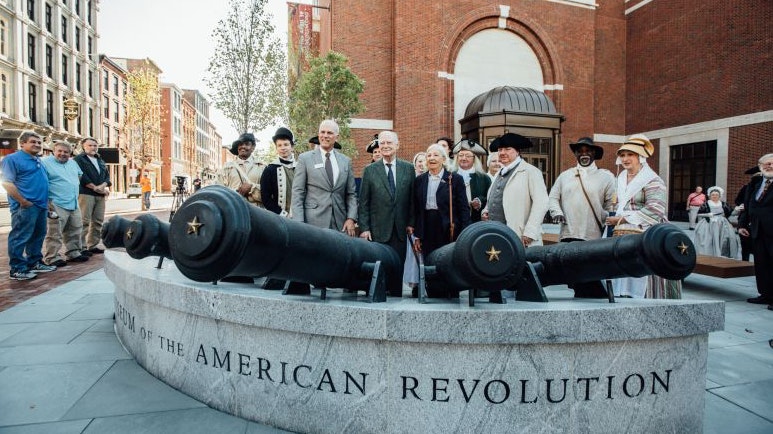 At the event, Quinn and Ed Rendell, former Pennsylvania Governor and Museum board member, unveiled an engraved stone dedicated to the Lenfests. The stone is set in the exterior wall next to the Museum’s main entrance and will be visible to visitors as they enter.

The site has been closed to the public since construction began in 2014. The event marked the official opening of the outdoor plaza, which extends along Third and Chestnut Streets, and will be accessible at all times for visitors and passersby to rest, reflect, and capture a unique photo to share.

The Museum building was designed by Robert A.M. Stern Architects, and Philadelphia’s OLIN provided the landscape design. Paved in bluestone and brick reused from paving on the original site, the plaza includes generous seating shaded by Valley Forge Elm trees. One of the trees, designated as “America’s Liberty Tree,” was dedicated in honor of Gerry Lenfest at the Museum’s groundbreaking event in 2014, when it was enriched with soil from Revolutionary sites around the world.

The plaza also features a dramatic display of cannons from the Revolutionary era, which are on a long-term loan from the Girard Estate in Philadelphia (Conservation was made possible thanks to a grant from the Board of Directors of City Trusts). The creation of the cannon display and the adjoining seating area was supported by the William B. Dietrich Foundation.

To the south, powerful words from the Declaration of Independence are emblazoned in limestone on one of the plaza’s flanking walls, supported by generous funding from Martha McGeary Snider.

The Museum of the American Revolution, which opens in the heart of historic Philadelphia on April 19, 2017, will explore the dynamic story of the American Revolution using its expansive collection of Revolutionary-era weapons, personal items, documents, and works of art. Immersive galleries, dynamic theaters, and recreated environments will bring to life the events, people, and ideals of our nation’s founding and engage people in the history and continuing relevance of the American Revolution. Located just steps away from Independence Hall, Carpenters’ Hall, and Franklin Court, the Museum will serve as a portal to the region’s many Revolutionary sites, sparking interest, providing context, and encouraging exploration. The Museum is a private, non-profit, and non-partisan organization. For more information, visit www.AmRevMuseum.org or call 877.740.1776.