PHILADELPHIA, MARCH 19, 2018 — Named one of the “10 Best New Museums in the World” by Fodor’s Travel and one of the “10 New Museums You Have to Visit in 2018” by Travel Channel, Philadelphia’s new Museum of the American Revolution will celebrate its first anniversary on April 19 and invites the community to join the festivities. 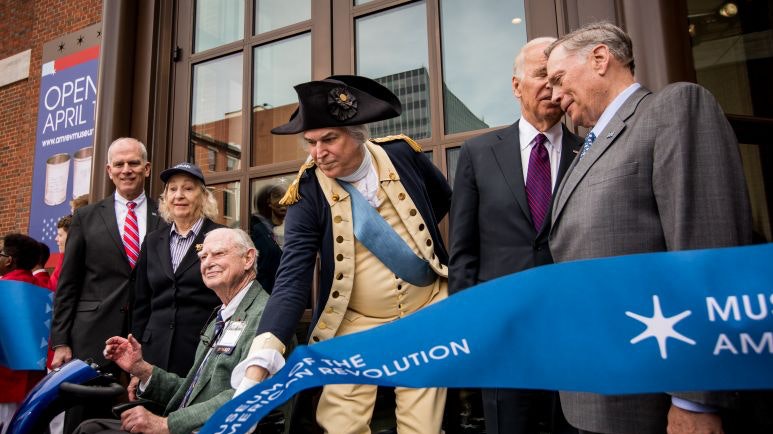 The Museum officially opened to the public on April 19, 2017 – the anniversary of the “shot heard ‘round the world” that ignited the Revolutionary War – and inspires visitors to consider their own role in carrying forward the unfinished aspirations of the American Revolution.

To thank the Museum’s many visitors, members, and supporters for an historic inaugural year, the Museum will offer FREE general admission on Thursday, April 19 from 3 – 8 p.m., as part of the Museum’s History After Hours evening series. The evening will include full exhibit access, trivia and games, and happy hour food and drink specials in the Museum’s Cross Keys Café.

From Thursday, April 19 – Sunday, April 22, visitors will have the opportunity to be part of the Museum’s history by signing their name to a Revolutionary muster roll and creating a temporary installation of paper chains and laurel wreaths in honor of the Museum’s “Paper Anniversary.” The muster roll will be included in a time capsule to be locked away in the Museum’s archives until 2026, the 250th anniversary of American Independence. Throughout the weekend, visitors can snap a photo in a complimentary photo booth from 1 – 5 p.m. and will receive a magnetic frame as a commemorative gift to take home. Visitors also can sign a giant card to wish the Museum a happy first birthday.

On Saturday and Sunday, April 21 – 22, the fifes and drums of the Old Barracks will perform their repertoire of colonial music from 11 a.m. – 3 p.m. on the Museum's outdoor plaza. On Saturday at 1 p.m., visitors can enjoy a piece of a birthday cake shaped like Washington’s War Tent. On Sunday, a string quartet of musicians from the Philadelphia Orchestra will delight visitors with a family-friendly musical performance inspired by artifacts in the Museum’s collection. The performance will take place in the Museum’s first-floor Patriots Gallery from 3 – 4:15 p.m. From 11 a.m. – 3 p.m., visitors can participate in pre-concert educational activities, including handling and learning about historical and contemporary instruments at an “instrument petting zoo.” 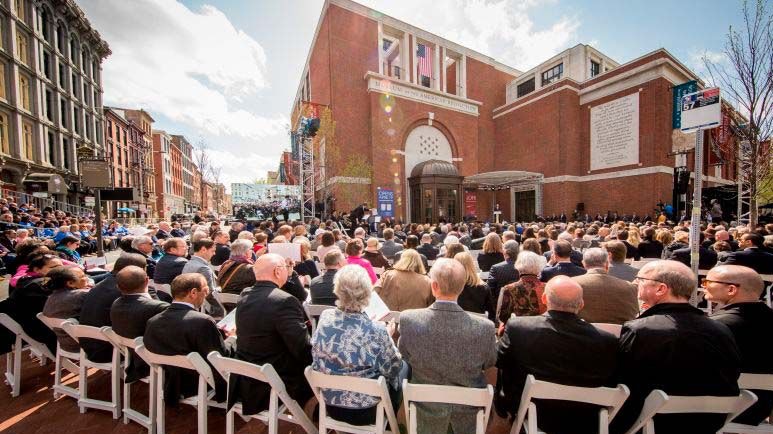 “What a year!” said Michael Quinn, Museum President and CEO. “We are gratified that visitors of all ages have been able to discover the exciting, real-life stories of ordinary people who changed the course of history, and have been challenged to consider their own role in carrying forward those Revolutionary ideals. The spirit of the American Revolution lives on!”

Since its grand opening celebration that stretched across Historic Philadelphia and reverberated around the nation, the Museum has welcomed more than 300,000 visitors, including 30,000 schoolchildren. In January, the Museum announced that it had surpassed its $150 million campaign goal, raising an extraordinary $173 million and drawing support from over 19,000 supporters across every state in the nation.

The Museum has quickly become a must-see destination, further strengthening Philadelphia’s stature as the Headquarters of the American Revolution. This year, the Museum also launched a new website, www.AmRevHQ.com, that highlights Revolutionary locations across the Greater Philadelphia region, including battlefields, burial grounds, historic houses. Visitors are encouraged to create an itinerary for their own Revolutionary journey.