Free Virtual Programs Include a One-Woman Show Based on the Life of Ona Judge, An Enslaved Woman Who Escaped the Washington Household in Philadelphia 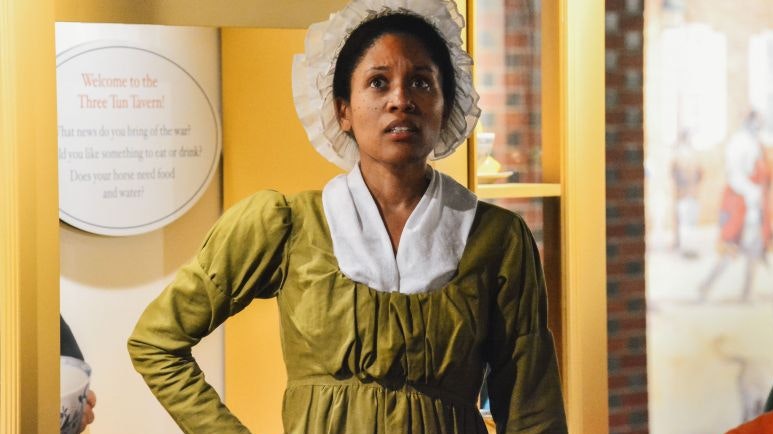 On Friday, June 19, the Museum will celebrate the 155th anniversary of Juneteenth, a celebration of the legal abolition of slavery in the United States, and will explore the continuing struggle for equality. Juneteenth was declared a state holiday in Pennsylvania in 2019. The Museum’s Juneteenth virtual programs are free and open to all.

On Friday at 9 a.m., tune into the Museum’s Facebook for a 20-minute performance of the one-woman theatrical piece “Freedom on the Horizon” with actor and historical interpreter Nastassia Parker as she portrays Ona Judge, an enslaved woman who ran away from George and Martha Washington’s household in Philadelphia. Parker previously joined the Museum in 2019 as part of the Museum’s Meet the Revolution series of living history interpretation.

“Visitors were captivated by Nastassia’s powerful performance at the Museum last year, and we are honored to welcome her back for this moving program that is free and accessible to all,” said Dr. Elizabeth Grant, Director of Learning and Engagement. “Nastassia’s portrayal of Ona Judge invites us all to reflect on the paradox of slavery and freedom in our nation’s history and consider its powerful legacy today.”

The performance will be followed by an Instagram Live question-and-answer session with Parker at 1 p.m. about the story of Ona Judge and Parker’s experiences as a living history interpreter of color. She will be joined by Tyler Putman, the Museum’s Manager of Gallery Interpretation.

Also on Friday, discover the story of Harry Washington, who was originally enslaved by George and Martha Washington and found freedom through service in the British army. A Virtual Discovery Cart featuring replica items like those owned or used by Harry Washington will be posted on the Museum’s Facebook and Instagram pages.

The Museum’s free, weekly mini-lesson plan for educators and parents schooling at home will explore Dunmore’s Proclamation, a 1775 document that promised freedom for enslaved people who left their owners and joined the British Army. The lesson plan will launch on the Museum’s website on Monday.

With the Museum’s recently enhanced, free Virtual Tour, you can explore the galleries anytime to learn the intimate—often unfamiliar—stories of free and enslaved people of African descent during the Revolutionary era. Virtual visitors will learn about Elizabeth “Mumbet” Freeman, an enslaved woman who sued for her freedom and won; London Pleasants, an African American teenager who joined Benedict Arnold’s British American Legion as a trumpeter; and Crispus Attucks, a dockworker of African and Native American descent who was killed during the Boston Massacre and is considered by many historians to be the first casualty of the American Revolution; among many others.

The African American Museum in Philadelphia (AAMP) also will be marking the date with Juneteenth 2020 Virtual Festival: Celebrate the Diaspora on Saturday, June 20, from 11 a.m. – 3 p.m. The event will include a poetry reading, a conversation with Kamau Ware of Black Gotham, a concert with the African Cultural Alliance of North America (ACANA), and more. It is free and open to all. For more information, visit www.aampmuseum.org.

Nastassia Parker has been a historical character interpreter and reenactor since age 9. More recently, she has served as a museum program consultant and portrayed famous and little-known figures of African American history, such as Ona Judge and Jemima Banneker, in one-woman shows and museum programming. She has performed at institutions including the Museum of the American Revolution, the New-York Historical Society, Kent Island Library, Historic London Town and Gardens, and the Benjamin Banneker Historical Park and Museum.