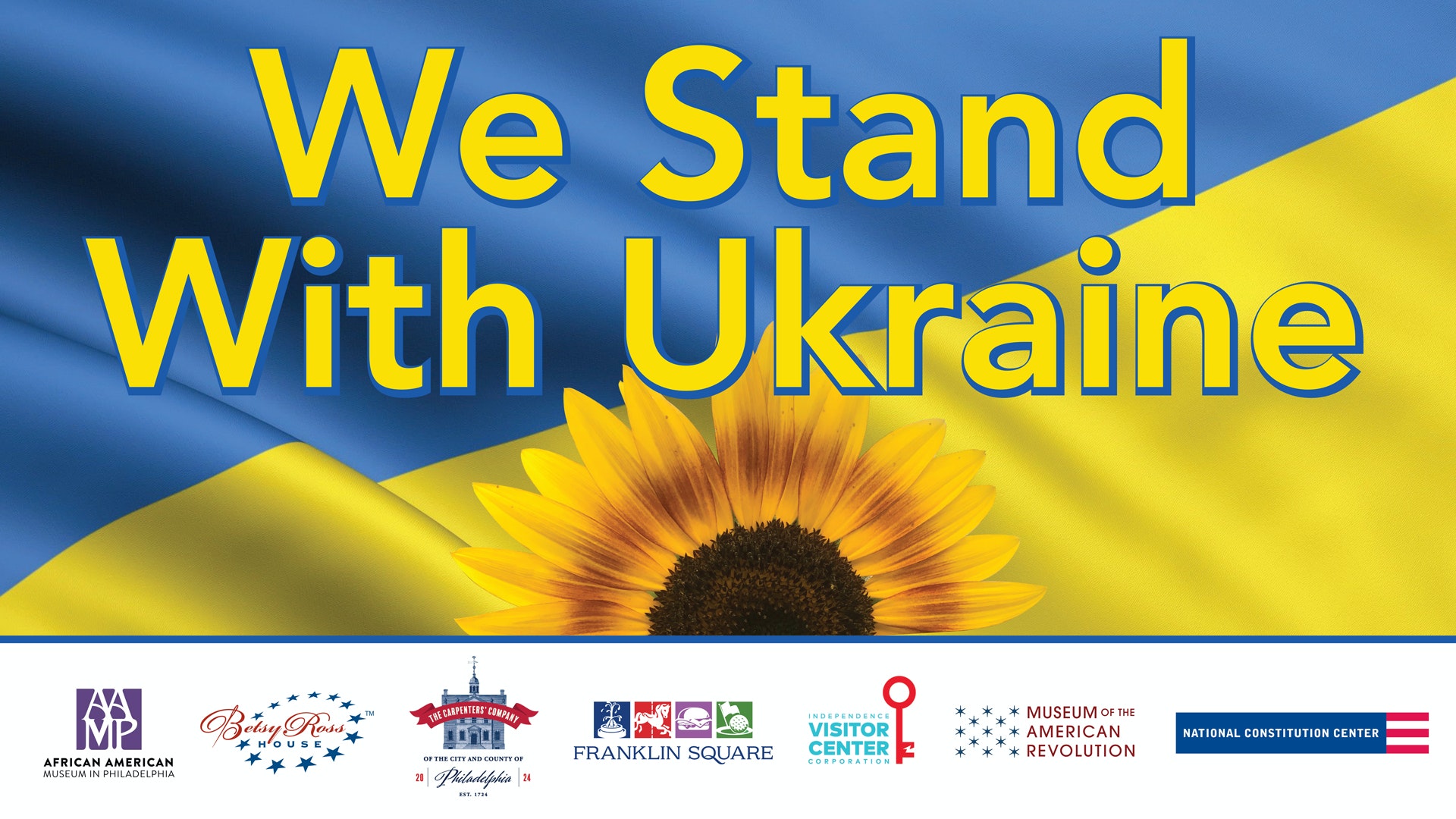 Sites Will Donate 100 Percent of Admissions Proceeds from Saturday, March 19

The Museum of the American Revolution joins several well-known sites and institutions in Philadelphia’s historic district, the birthplace of democracy, in partnership to support democratic ideals in Ukraine and around the world.

On Saturday, March 19, the African American Museum in Philadelphia, the Betsy Ross House, Carpenters’ Hall, Franklin Square, Independence Visitor Center, the Museum of the American Revolution, and the National Constitution Center will donate 100 percent of all admissions proceeds from that day to UNICEF, to support its efforts to deliver aid to the hundreds of thousands of children and families suffering from the effects of the war in Ukraine.

Full details will be announced at a press event at 11:30 a.m. on Wednesday, March 16, at the Independence Visitor Center. Honorable Edward G. Rendell, who inspired the initiative, and representatives from participating sites will be available for interviews.

“These institutions tell the story of America’s fight to become free and create one of the world’s greatest democracies,” said Rendell about the fundraising initiative. “We all believe we should do whatever we can to support the Ukrainian peoples’ fight to preserve their own democracy.”

Rendell continued, “The message to Ukrainians and all freedom-loving people is that we hope this effort is an inspiration to encourage everyone to do what they can. If you are looking to support the families of Ukraine, this is a way to begin.”

UNICEF works in more than 190 countries and territories to put children first and is currently focusing efforts on the displaced families from Ukraine. UNICEF has helped save more children's lives than any other humanitarian organization by providing health care and immunization, clean water and sanitation, nutrition, education, emergency relief and more. UNICEF USA supports UNICEF's work through fundraising, advocacy and education in the United States.

For anyone unable to visit on Saturday, all participating sites will continue to collect donations throughout the month of March.

About the participating organizations:

Carpenters' Hall is a treasure in Historic Philadelphia. It hosted the First Continental Congress in 1774 and was home to Franklin’s Library Company, the American Philosophical Society, and the First and Second Banks of United States. Colonial delegates including George Washington, John Adams and Patrick Henry laid the groundwork for America’s grand experiment in democracy.

The Independence Visitor Center Corporation (IVCC) is a Pennsylvania nonprofit, 501(c)3 organization, which operates in cooperation with the National Park Service, Visit Philadelphia, Philadelphia Convention and Visitors Bureau, the City of Philadelphia, and the Commonwealth of Pennsylvania. The IVCC manages the Independence Visitor Center, the official visitor center of the Philadelphia region and primary point of orientation for Independence National Historical Park; satellite visitor center locations; and the visitor-friendly public transit service, Philly PHLASH® Downtown Loop.

The National Constitution Center in Philadelphia brings together people of all ages and perspectives, across America and around the world, to learn about, debate, and celebrate the greatest vision of human freedom in history, the U.S. Constitution. A private, nonprofit organization, the Center serves as America’s leading platform for constitutional education and debate, fulfilling its congressional charter “to disseminate information about the U.S. Constitution on a nonpartisan basis.” As the Museum of We the People, the Center brings the Constitution to life for visitors of all ages through interactive programs and exhibits. As America’s Town Hall, the Center brings the leading conservative and liberal thought leaders together to debate the Constitution on all media platforms. As a Headquarters for Civic Education, the Center delivers the best educational programs and online resources that inspire citizens and engage all Americans in learning about the U.S. Constitution. For more information, call 215-409-6700 or visit constitutioncenter.org.