Four Black Historical Interpreters Will Join the Museum Throughout the Summer for Hands-on Demonstrations, Crafts, and Storytelling

What was life like for Black women and men of the Revolutionary era? This summer, four Black costumed living history interpreters will join the Museum of the American Revolution for short-term residencies to portray and discuss free and enslaved craftspeople of African descent through hands-on demonstrations, storytelling, and conversation. Visitors will meet the special guest interpreters inside the Museum and on the outdoor plaza on select dates from July 16 – September 6, 2021, as part of the Museum’s Meet the Revolution series.

“At the Museum, we are committed to exploring the complexities of our nation’s founding and lifting up stories that have often gone untold,” said Michael Idriss, the Museum’s African American Interpretive Fellow. “We are thrilled to have these incredible historical interpreters join the Museum this summer to shine a light on the stories of free and enslaved people of African descent whose lives and skills made an impact and left a lasting legacy.”

Meet the Revolution is an ongoing series of costumed living history programs that explore the voices, viewpoints, and experiences of the diverse people of the Revolutionary era. The Summer 2021 Interpreters-in-Residence Program is part of the Museum’s African American Interpretive Program sponsored by Comcast NBCUniversal.

Meet the Revolution summer residencies include: 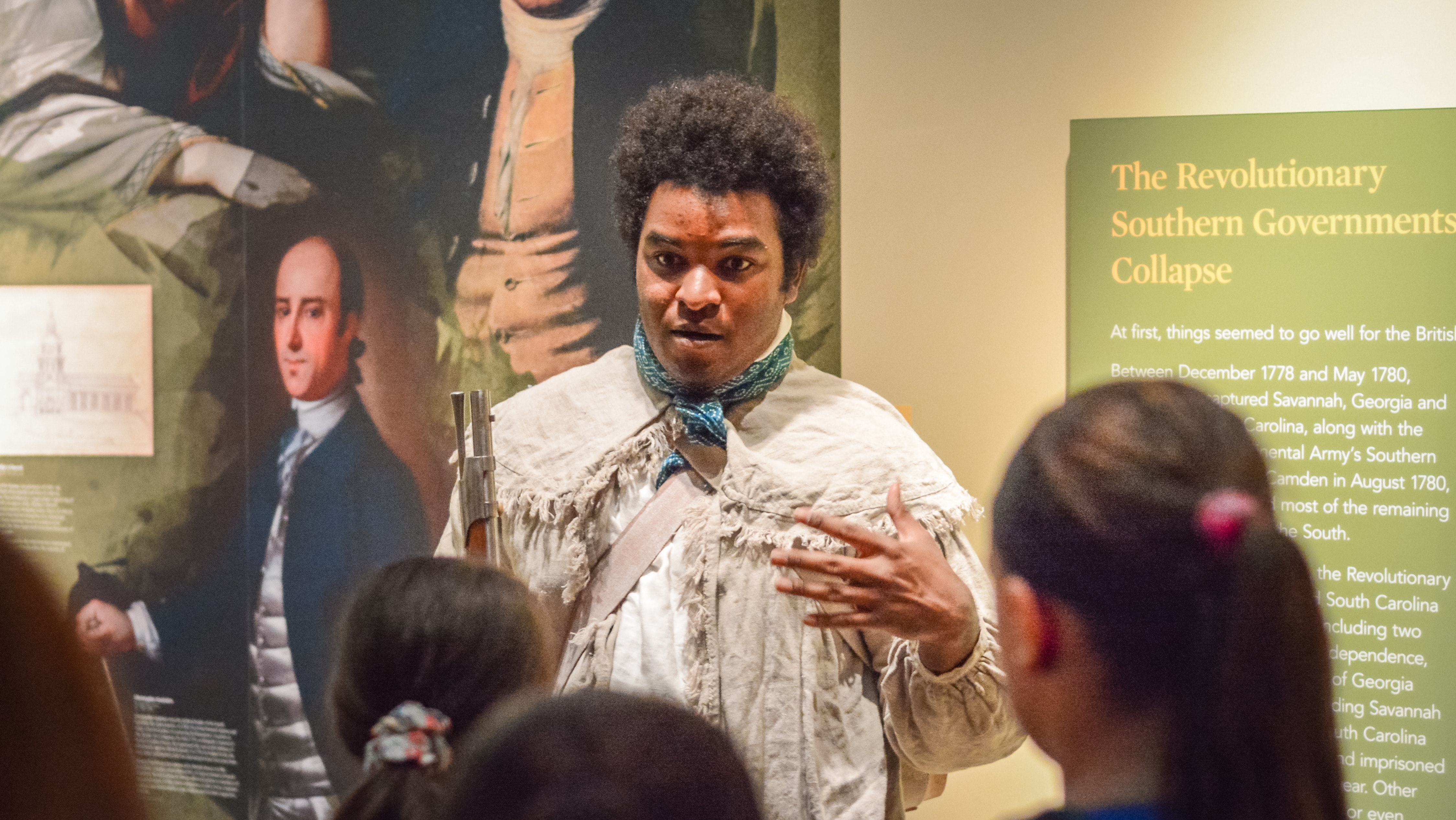 All Meet the Revolution programming is included with regular Museum admission. Tickets to the Museum can be purchased by calling 215.253.6731 or at amrevmuseum.org. The Museum is currently open to the public daily from 10 a.m. – 5 p.m. with enhanced health and safety protocols. Follow along on Facebook, Instagram and Twitter for updates and additional resources.

The Meet the Revolution Summer 2021 Interpreters-in-Residence Program is part of the Museum’s African American Interpretive Program Sponsored by Comcast NBCUniversal.

About Brenda Parker
Brenda Parker is the African American Interpretation and Special Projects Coordinator at George Washington’s Mount Vernon. As such, Parker engages in narrative storytelling to enhance the guests’ perspectives and experiences as well as working to connect and assist the descendants of formerly enslaved persons at Mount Vernon during Washington’s life. She created and has performed Freedom Skies, a one-person play that tells the stories of the first “Freedom Day” in the lives of four persons who fall under different ownership statuses. She has presented for the George Washington Teachers Institute, the College of William and Mary, Historic London Town and Gardens in Md., as well as the Peter Wendtz Farmstead in Pa. For more information, visit www.mountvernon.org.

About Noah Lewis
Noah Lewis was born in Heidelberg, Germany, and later moved to Upper Darby, Pa. His fascination with Black historical figures who contributed to America’s freedom led him to begin performing living history presentations at schools, historical sites, and historical events. He began portraying Edward “Ned” Hector, a Black Continental soldier who fought at the Battle of Brandywine, in 1996 at Bywood School. He is currently in the process of writing Ned Hector’s biography. For more information, visit www.nedhector.com.

About Cheyney McKnight
Cheyney McKnight is the founder and owner of Not Your Momma’s History, a public history consulting business that aids museums, historical sites, historical societies, and private businesses in developing specialized programing about the African experience within 18th- and 19th-century America. She trains staff from all backgrounds on how to talk about slavery with diverse audiences. McKnight also uses her clothing and research to make connections between past and present events through performance art pieces.

About Kalela Williams
Kalela Williams has worked in public programming and education for more than a decade, in her current role with the Philadelphia youth organization Mighty Writers and previous roles with the Free Library of Philadelphia and James Madison University's Furious Flower Poetry Center. She is also the founder of Black History Maven, a gathering community that honors all diverse pasts, affirms Black identity and pride, and engages communities in literary, artistic, and cultural conversations. Through Black History Maven, she has offered numerous tours of Philadelphia, focusing on often-untold stories in history. In addition, Williams serves on the board of the Historical Society of Pennsylvania and writes fiction that connects history with the present. Her essay, “The Three Century Walk” is forthcoming this fall in Making Tracks: Reflections on Walking by New Door Books, and she recently received a Tin House Writing Residency for her YA novel-in-progress, The Rosebine Daughters, the story of a teenaged girl navigating her identity and an ever-widening rift with her mother when they move into the plantation home their enslaved ancestor built. For more information, visit www.kalelawilliams.com.