Philadelphia, PA, Oct. 6, 2016 — Lifecasts, or realistic 3-D replicas of human models, of five Native Americans were created recently for a gallery dedicated to the Oneida Indian Nation at the new Museum of the American Revolution, which opens in Philadelphia on April 19, 2017. 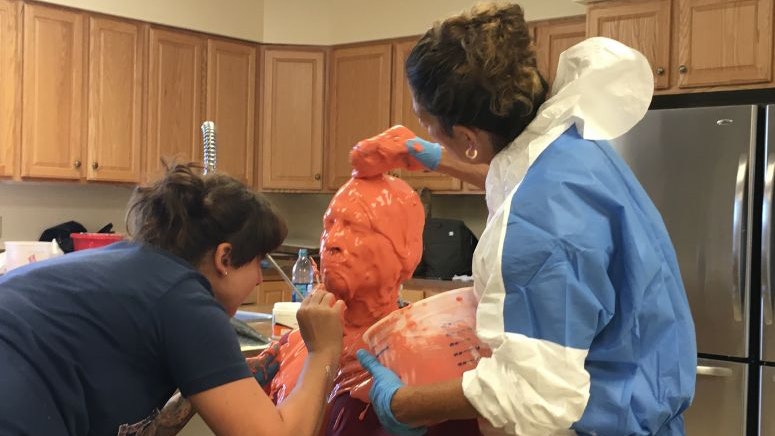 The lifecasting took place at the Tuscarora Nation House near Buffalo, New York, and was conducted by New York’s Atta Inc., a specialty sculptural fabrication studio. The creative team at Atta, Inc. is working with curators at the Museum of the American Revolution to recreate the appearance of Native American men and women during the Revolutionary War.

The process involved applying alginate molding material –a type of dental plaster – to the models’ faces to create a highly-detailed impression, and then casting into the molds with a fiberglass reinforced acrylic polymer matrix to create a highly realistic three dimensional portrait of the individual.

The three male and two female models are members of the Seneca and Tuscarora nations of the Haudenosaunee, or Iroquois Confederacy. 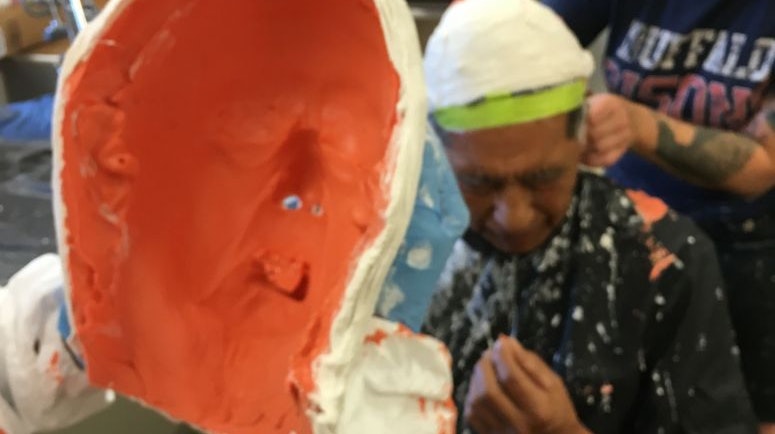 “The Oneida Nation was one of the first allies to support the fledgling United States. The Oneida people endured many hardships and lost lives during America’s War for Independence, yet their role in the founding of our nation is unknown to many,” said Dr. R. Scott Stephenson, the Museum’s Vice President of Collections, Exhibitions, and Programming. “At the Museum of the American Revolution, we will expand visitors’ understanding of the ‘founding generation’ by telling the diverse stories all the peoples who lived through the tumultuous creation of our nation.”

“It is exciting to see a little known but important part of American history come to life in such a unique way,” said Oneida Indian Nation Representative Ray Halbritter. “We are honored that the Oneida Nation’s role as First Allies of America will be part of this unparalleled, historic museum for generations to come.”

A video component that will be featured in the gallery was filmed at Endview Plantation in Newport News, Virginia, last month.

About The Oneida Indian Nation

Historically inhabiting the lands from the northern border of Pennsylvania north to the St. Lawrence River of New York State, the Oneida Indians made their mark in American history by becoming the first ally of the colonists in their fight for independence in the American Revolutionary War. In 1794, after the victory over the British, George Washington signed the Treaty of Canandaigua which recognized the Oneida Nation as a sovereign entity and protected much of the lands that comprise Oneida and Madison Counties. Today, the Oneida Nation has regained prosperity through its Turning Stone Resort and Casino and its 15 other diverse enterprises. Via this new economic surge, the Oneida Nation has provided many programs and services to its Members and has enacted and supported many philanthropic programs and furthered its commitment to ensuring a peaceful community.

Established as a boutique commercial sculpture studio, Atta Inc. has grown over the last 30 years to encompass several fabrication fields and is now a leader in unique hand-made objects. Widely known for their resin work, Atta Inc. is the preeminent manufacturer of resin for design and architectural applications. Atta’s team has made cutting-edge advances in the field of custom-made resin furniture and objects. In addition, with over 1000 figures in the Smithsonian Institute, National Parks, and various museums around the world, Atta Inc. is one of the most prolific and well-renowned makers of museum figures operating today. Atta’s sculptures can be found everywhere from presidential libraries to the WWE Hall of Fame. For more information, visit www.attainc.com.