Learn 18th-Century Social Dances at A Winter’s Ball as Part of Museum’s “History After Hours” Event on Jan. 22

Dance the night away alongside 18th-century dance masters at A Winter’s Ball on Tuesday, Jan. 22 from 5 – 8 p.m., as part of the Museum of the American Revolution’s History After Hours series. Visitors are encouraged to dress in their finest attire (petticoats and powdered wigs optional). 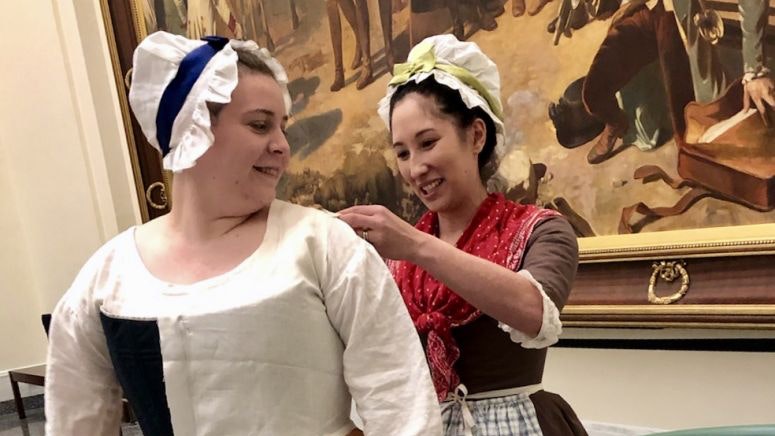 Throughout the evening, instructors from New Jersey-based dance company In Good Company will demonstrate 18th-century social dances accompanied by costumed living historians. Visitors will learn the art of English Country Dancing, a type of social dance that is performed by a group of people (usually couples) and involves interactions with other dancers – it is one of the predecessors to modern-day country line dancing!

Spread the warmth by bringing a new or gently used coat to donate to Philadelphia’s One Warm Coat for $2 off admission.

In the Museum’s new hands-on exhibit Hamilton Was Here: Rising Up in Revolutionary Philadelphia, visitors can try on reproduction 1790s clothing and take part in a levee, or social gathering, to experience visiting First Lady Martha Washington’s home in Philadelphia. At a Discovery Cart, learn about Ona Judge, an enslaved seamstress in the Washington’s home whose responsibility would have been to help Martha Washington get ready for formal events. Then, test your Hamilton knowledge with a trivia contest in Cross Keys Café.

What would Eliza Schuyler have worn when she first met Washington’s dashing aide-de-camp, Alexander Hamilton? Seamstress Samantha McCarty of the Museum’s Fashioning Eliza project will discuss how people would have prepared for a ball in the Revolutionary era and demonstrate 18th-century fashions.

In the upcoming months, History After Hours will include Liberty for All? on Tuesday, Feb. 19, 2019 and Burn After Reading on Tuesday, March 19, 2019.

About In Good Company
Susan Braisted and Niel DeMarino co-founded In Good Company in 2005. The troupe was founded with the idea to reinterpret the country dances with historically accurate "stepping" and incorporate notated period minuets and other figured dances for balls and assemblies.