PHILADELPHIA, AUGUST 29, 2017 — When George Washington first took command of the Continental Army in 1775, there was no standard uniform or insignia for officers, much less for the Commander-in-Chief. He needed something to distinguish himself from other officers. But what? The item he chose, a blue silk sash, or ribbon, worn across his chest, is currently on display at the Museum of the American Revolution until Oct. 9. 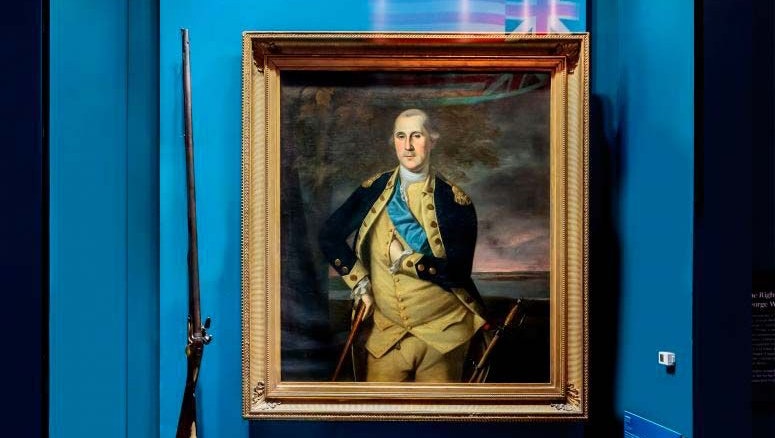 The sash, which is on loan from Harvard University’s Peabody Museum of Ethnography and Archaeology, is displayed alongside a 1776 portrait of Washington by Philadelphia artist Charles Willson Peale in which Washington is depicted wearing the sash. The portrait is on loan from the Brooklyn Museum. For the next 6 weeks, visitors can see these items reunited for the first time since the 18th century.

The sash was re-discovered by Dr. Philip Mead, Chief Historian and Director of Curatorial Affairs at the Museum of the American Revolution, several years ago at Harvard’s Peabody Museum, where it had been essentially hidden-in-plain-sight for decades. Although it was suspected to have belonged to Washington, it had never been confirmed. Mead spent years studying the sash before he was able to conclude that is indeed the one worn by Washington. More information on his research is available here.

“This ribbon is so much more than just a piece of fabric - it was what Washington used to establish his authority. Philadelphia artist Charles Willson Peale painted Washington wearing it numerous times and it became an important symbol of Washington during the Revolutionary War,” said Mead. “Very few uniforms from the American Revolutionary War have survived, let alone pieces of Washington's own military clothing, so being in the presence of this sash that Washington wore during the heavy fighting of 1775-1779 is astounding.”

According to Mead, the sash literally disappears from (is painted out of) later paintings of Washington after he decides that it too closely resembles monarchial symbols of power. One of these paintings, “George Washington at the Battle of Princeton” (1781) by Charles Willson Peale, is on display at Yale University Art Gallery. 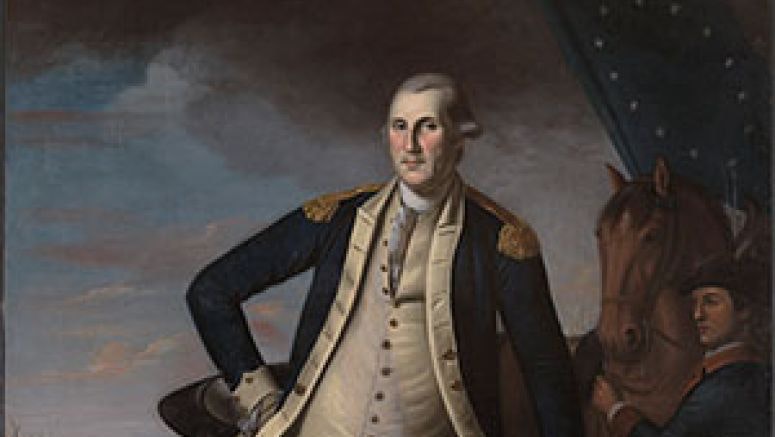 After the sash is removed from the Museum, it will be replaced with a sword that belonged to General George Washington, on loan from a private lender, beginning Tuesday, Oct. 10. The sword was made in Philadelphia in 1770 and used during the early years of the Revolutionary War.

“We are incredibly grateful to the generous institutions and private lenders who have supplemented our collection of more than 3000 artifacts, allowing us to present one of the richest and most comprehensive collections of Revolutionary-era artifacts ever displayed,” said Michael Quinn, Museum President and CEO. “There is always something new to see at the Museum, giving visitors another reason to come back again and again.”

The sword will be displayed alongside a hand-painted copy (ca. 1778) of Peale’s portrait of Washington. Peale’s portrait was one of the first images of the commander-in-chief during the war. There was great interest in what Washington looked like, so numerous copies were commissioned. This copy has been attributed to artist Samuel King and appears to have been made for a French audience.

Other new items on display at the Museum this fall include 18th century prints of British General Charles Cornwallis and British Lieutenant Colonel Banastre Tarleton from the Museum’s collection. In the Richard Gilder and Lois Chiles Gallery, several new documents are now on display, courtesy of The Gilder Lehrman Institute of American History, including a petition sent to King George III by the First Continental Congress in 1774, calling for the repeal of the Coercive Acts; a 1769 receipt documenting a payment for land made by the colony of Pennsylvania to the Six Nations of the Iroquois Confederacy, which is signed with a wolf “totem” by Iroquois leader Joseph Brant (Thayendanegea); and a warrant for the arrest of John Campbell of New York City, who was accused of treason.