PHILADELPHIA, JUNE 19, 2017 — June 21 marks the official start of summer, and the Museum of the American Revolution is celebrating by announcing extended hours, special programs, a happy hour series and family fun all summer long.

Launched in June, the Museum will now be offering early access tours every Tuesday morning from 9 – 10 a.m. Led by one of the Museum’s expert staff members, visitors can explore and enjoy the Museum’s exhibits before the crowds. Tours are limited to 10 people. For more information and to book a tour, click here. 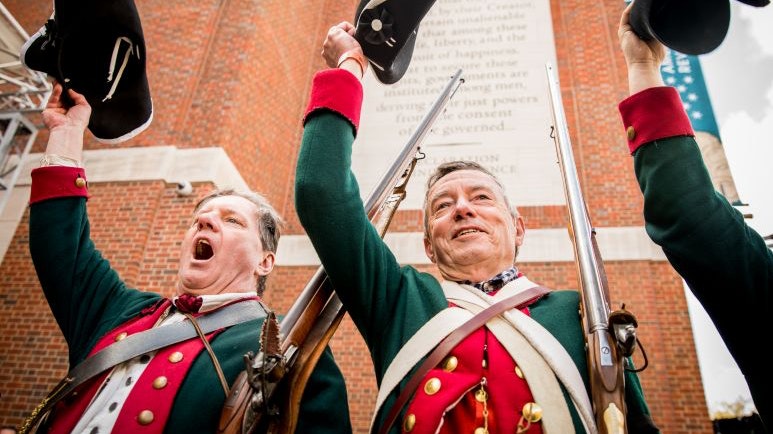 Every day in July and every weekend in August, visitors can engage with costumed historical interpreters on the Museum’s outdoor plaza from 11 a.m. – 3 p.m. Family-friendly activities will take place from 11 a.m. – 3 p.m. daily in the Museum’s Patriots Gallery. Kids can try on Revolutionary-inspired clothing, design a flag, decode secret messages and practice drilling like a Revolutionary soldier.

Also new this summer, visitors can learn about our nation’s history from Once Upon A Nation storytellers at their newest storytelling bench located in the Museum’s outdoor plaza. The engaging storytellers will bring to life the stories of James Forten, a free black 14-year-old who joined a privateer ship; Deborah Sampson, a woman who dressed as a man in order to fight in the Revolutionary War; and the Philadelphia beginnings to the relationship between Alexander Hamilton and Aaron Burr. Storytelling hours are available here.

Every day at 11 a.m. during the month of July, the Museum will show a 25-minute film in Liberty Hall that was produced by the Oneida Nation and narrated by actor Kevin Costner. Entitled “The People of the Standing Stone: The Oneida Nation, The War of Independence, and the Making of America,” the film further explores the role of the Oneida Indians in the American Revolution, a story which is featured in the Museum’s exhibits.

On June 17, the Museum's Cross Keys Café kicked off a summer happy hour series for all ages with small bites, samples, and giveaways. A Museum ticket is not required to enjoy the café and outdoor patio.

On Tuesday, June 20, from 5 – 7:30 p.m., the Museum will kick off its inaugural year of Young Friends events with an evening of conversation, celebration, and after-hours exhibit access. Each ticket includes one drink at the Museum’s Cross Keys Cafe, 18th century card games, and full admittance to museum exhibits. Special happy hour food and beverage menu also will be available. General admission is $20. Museum member tickets are $15. Tickets can be purchased here.

On Saturday, July 1, the Museum’s Cross Keys Café will host an “Independence Ice Cream Social” from 5 – 7 p.m., featuring ice cream by Philadelphia’s own The Franklin Fountain ice cream parlor and soda fountain and in partnership with QC Mercantile.

On Tuesday, July 11, Cross Keys Café will host a duel-themed happy hour from 5 – 7 p.m. in commemoration of the 213th anniversary of the Hamilton-Burr Duel, directly across the street from Hamilton’s First Bank of the United States. The event will include a discussion on the history of dueling and Hamilton's legacy. Happy hours at Cross Keys Café will also take place on August 12 and August 26.

General admission tickets to the Museum can be purchased here and are $19 for adults; $17 for seniors, students, and active or retired military; and $12 for children ages 6 and up. Children ages 5 and under are free. All tickets are valid for two consecutive days. Group tickets for parties of 15 or more are currently available for a discounted price by calling 267.858.3308. Memberships are also available for purchase here or by calling 215.454.2030.