PHILADELPHIA, April 4, 2018 — How can one of technology’s most cutting-edge advances – augmented reality – bring to life centuries-old stories from the American Revolution? On Friday, April 20, 2018 at 1:30 p.m., cadets from the United States Military Academy will join the Museum of the American Revolution for a discussion on using digital technologies to energize public history. 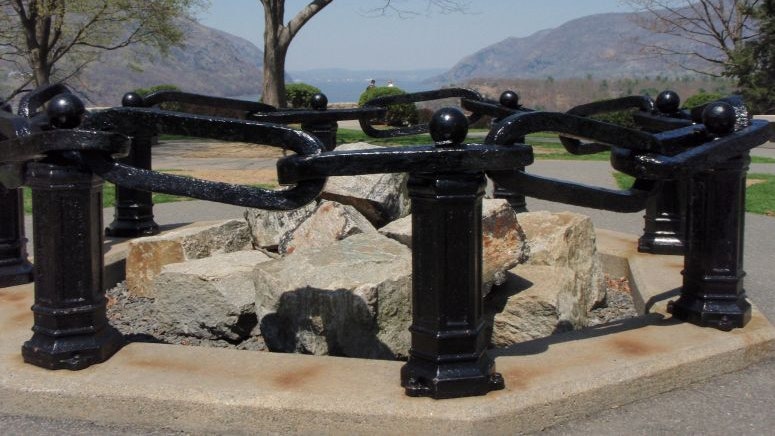 The remains of the Great Chain are located at Trophy Point at West Point, NY. Photo courtesy of Wikimedia Commons.

At the event, entitled “Bringing the Great Chain to Life: West Point, Augmented Reality and the American Revolution,” five cadets will unveil an augmented reality project they have created about West Point during the American Revolution. The project is a smartphone application that allows users to augment a current view of the Hudson River with computer-generated images from the 18th-century, including the “Great Chain” – a massive chain that stretched across the Hudson River during the Revolutionary War to prevent British naval vessels from sailing upriver. They will discuss how augmented reality can help bring that story to life in richer and more meaningful way. The app will be available to the public beginning in early May.

Following the presentation, a 30-minute panel discussion will focus on the role digital history can play in promoting both academic and public history in the future. In addition to the cadets, the panel will include USMA professor Lieutenant Colonel Seanegan Sculley; historian James Kirby Martin; Dr. R. Scott Stephenson, Vice President of Collections, Exhibitions and Programming at the Museum; and Dr. Philip Mead, Chief Historian and Director of Curatorial Affairs at the Museum.

A question-and-answer session with the audience will follow. The event will take place in the Museum’s Liberty Hall. It is free with regular admission.