PHILADELPHIA, Jan. 3, 2017 — At first glance it may seem unassuming, but a small, white bowl uncovered during an archaeological excavation in Philadelphia has thrilled the ceramics world. The bowl marks the first physical proof of American-made true, hard-paste porcelain ever found.

Hard-paste – or true – porcelain, first produced by Chinese potters around the 7th century A.D., is notable for its desirable degree of translucency. Attempts to replicate the process were ongoing throughout the Western world in the 18th century. 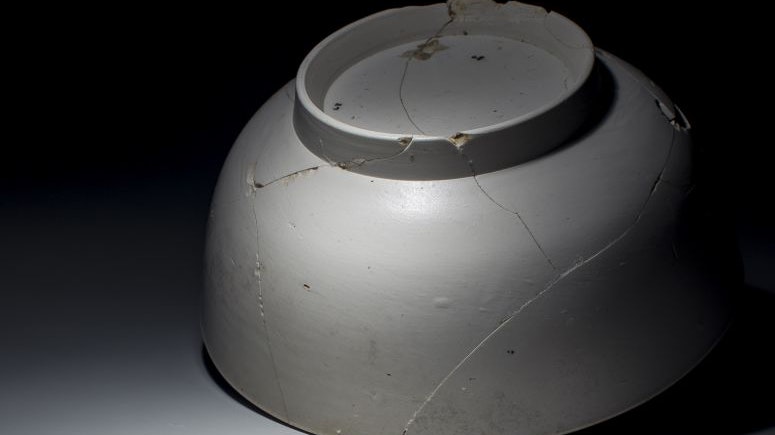 “One of the most intriguing stories in the world of ceramic history is the search for the secrets of making hard-paste porcelain,” said Robert Hunter, editor of Ceramics in America and an author and archaeologist.

“The search, however, for physical evidence of making true porcelain in 18th century America has been frustratingly unsuccessful – until now. The discovery of this bowl is like finding the holy grail of American ceramics, and is a thrilling addition to the history of the American effort to produce this coveted material.”

Recovered in 2014 from among nearly 85,000 artifacts found on the site of the new Museum of the American Revolution by archaeologists from Commonwealth Heritage Group, the bowl was initially thought to have a stoneware body. However, subsequent material analysis by Dr. J. Victor Owen, an expert on the geochemistry of archaeological ceramics and glass, and his colleagues revealed that the 18th century punch bowl is true-porcelain that had most likely been manufactured in Philadelphia.

The findings are presented in the January issue of Ceramics in America by Hunter and Juliette Gerhardt, lab director from Commonwealth Heritage Group. An analysis of the geochemistry by Owen colleagues also is included in the issue. Ceramics in America is an annual journal published by the Chipstone Foundation of Milwaukee, Wisconsin. 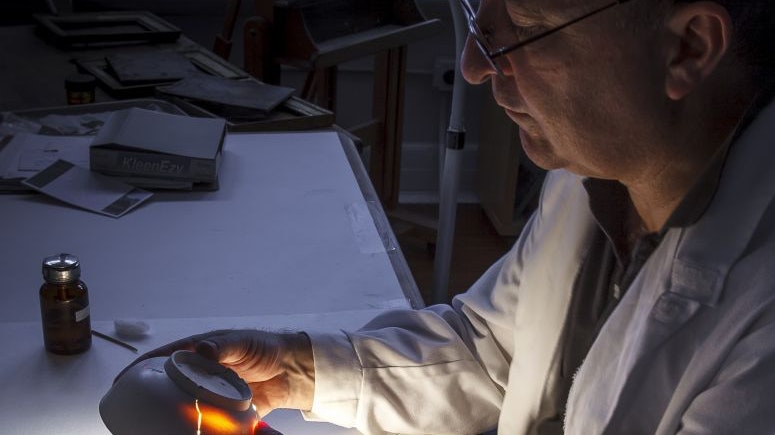 The bowl will be exhibited for the first time at the New York Ceramics and Glass Fair. As part of the Fair’s lecture series, Hunter will discuss the discovery and significance of the bowl on Thursday, Jan. 19 at 2 p.m. It will then be returned to the Museum of the American Revolution, where it will be displayed in a gallery dedicated to examples of “homespun” American goods when the Museum opens on April 19, 2017.

“The discovery of this remarkable little bowl reminds us that the 'buy local' movement has very deep roots in American history,” said Dr. R. Scott Stephenson, Vice President of Collections, Exhibitions, and Programming at the Museum of the American Revolution. “It is also an important reminder that when colonists boycotted imported British goods as a way to protest Parliamentary taxation, they did not have to settle for crude versions of beloved luxuries from abroad. Colonial tradespeople produced elegant textiles and ceramics for a market eager use the ‘power of the purse’ to make a political point.”

Archaeologists from Commonwealth Heritage Group, Inc. conducted fieldwork at the site of the new Museum of the American Revolution, from July through October 2014 and briefly in April 2015 and May 2016, uncovering a record of occupation from the earliest settlement of Philadelphia through the mid-20th century. Most of the artifacts were found in brick-lined privy and well shafts. The features contained an enormous quantity of of ceramics, including locally made Philadelphia objects and imported English, German, and Chinese wares, among other artifacts.

The Museum of the American Revolution, which opens in the heart of historic Philadelphia on April 19, 2017, will explore the dynamic story of the American Revolution using its rich collection of Revolutionary-era weapons, personal items, letters, diaries, and works of art. Immersive galleries, theaters experiences, and recreated historical environments will bring to life the events, people, and ideals of our nation’s founding and engage people in the history and continuing relevance of the American Revolution. Located just steps away from Independence Hall, Carpenters’ Hall, and Franklin Court, the Museum will serve as a portal to the region’s many Revolutionary sites, sparking interest, providing context, and encouraging exploration. The Museum is a private, non-profit, and non-partisan organization. For more information, visit www.AmRevMuseum.org or call 877.740.1776.

The New York Ceramics & Glass Fair, which includes 28 of the top international ceramic and glass dealers, takes place at the Bohemian National Hall, 321 East 73rd Street (between First and Second Avenues), and opens with a Private Preview on Wednesday, January 18, from 5:00 p.m. to 8:30 p.m., and to the public on Thursday, January 19 through Sunday, January 22. Hours are 11 a.m. to 7 p.m., Thursday through Saturday, and on Sunday from 11 a.m. to 4 p.m. Tickets are $20 per person and can be used throughout the duration of the fair. An important component to the New York Ceramics & Glass Fair is their extensive lecture program, which runs throughout the duration of the fair. With a line-up of distinguished curators and experts, this year's series will not disappoint collectors and connoisseurs of all stripes. And neither will the two loan exhibitions: "Expression and Experimentation in Clay," curated by Thomas Loller and "Private Thoughts: Beadwork Sculpture," by Leslie B. Grigsby. The New York Ceramics & Glass Fair is co-produced by Meg Wendy of MCG Events LLC and Liz Lees, of Caskey Lees Inc. For more information visit, www.nyceramicsandglass.com or phone at 929-265-2850.