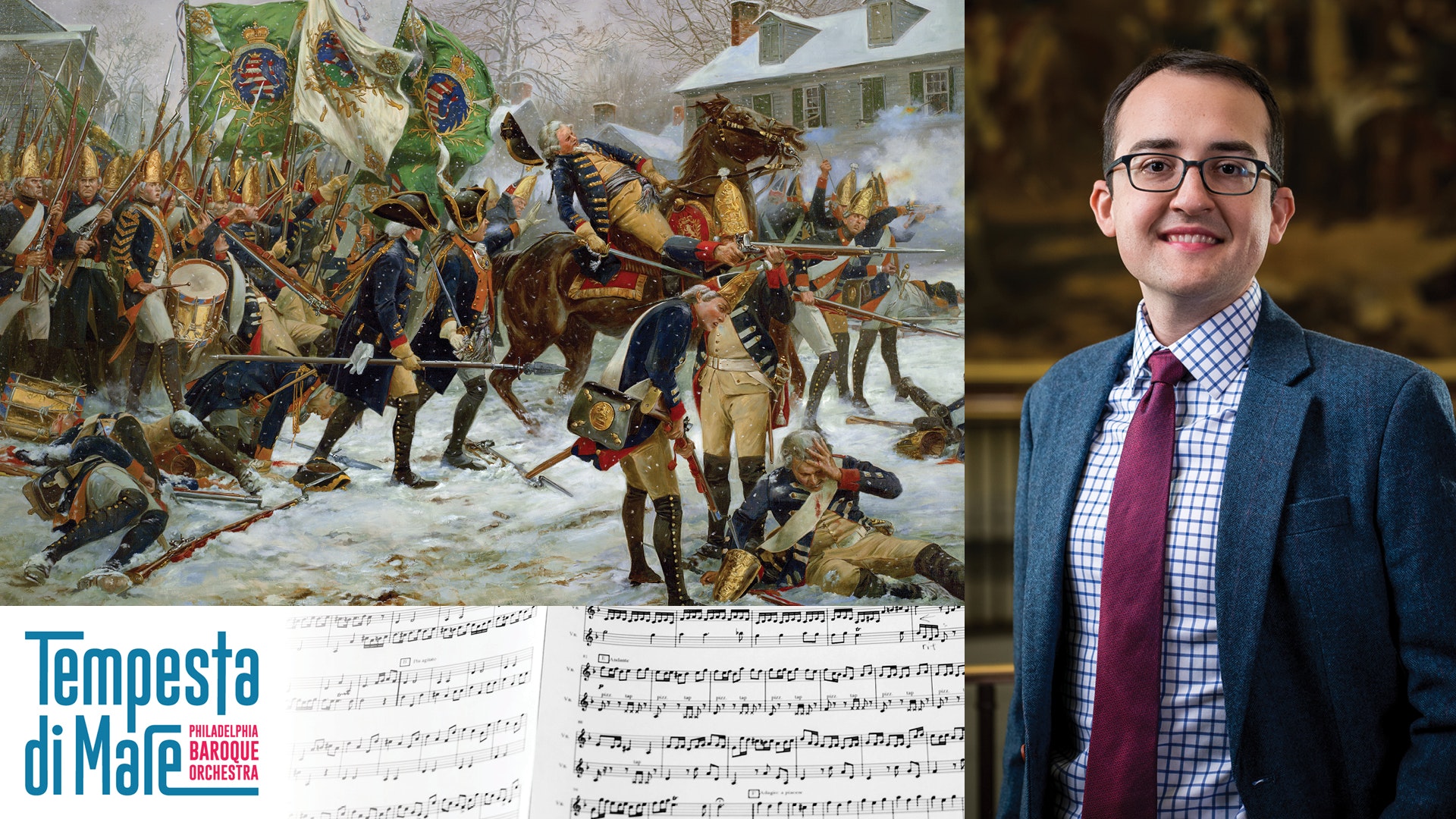 What do Hessian oboists captured by General Washington in 1776 have to do with today’s vice-presidential march? Join us for AmRev Presents: A Hessian Holiday Concert with Tempesta di Mare at the Museum of the American Revolution on Tuesday, Dec. 28, 2021, from 6-7:30 p.m. to explore the surprising German influence on early American music. The concert will take place in-person in the Museum’s Liberty Hall and will be livestreamed for ticketed online audiences.

Enjoy music the oboists might have played in 1776, a march from the first anniversary of the Declaration of Independence in 1777, and holiday tunes of the early Federal Period performed by five ensemble members of Philadelphia Baroque Orchestra Tempesta di Mare on oboe, clarinet, bassoon, horn, and drums.

The Museum’s Curator of Exhibitions Matthew Skic will provide historical commentary throughout the event, and Ulrike Shapiro, Executive Director at Tempesta di Mare and a native of Celle, Germany, will offer illustrated insights into the music and its geographic ties.

Tickets are $20 for onsite general admission or $15 for Museum Members (proof of vaccination is required). Online-only admission is $15 for general admission or $10 for Museum Members. Doors will open at 5:15 p.m. with the opportunity to enjoy a pre-show performance with a festive cash bar and a chance to meet living history interpreters dressed as Hessian soldiers. Tickets can be purchased here or by calling 215.253.6731. This special program is inspired by the Museum’s current special exhibition, Liberty: Don Troiani’s Paintings of the Revolutionary War, which includes Troiani’s painting of the Hessians at the Battle of Trenton. Liberty is open 10 a.m. – 5 p.m. daily and included with regular Museum admission. This year marks the 245th anniversary of the “Ten Crucial Days” during which Washington’s army famously crossed the Delaware River and won its first victories at Trenton and Princeton, helping the American Revolutionaries avoid a quick defeat.

At the Battle of Trenton on Dec. 26, 1776, Washington’s army defeated a force of Hessian troops—German soldiers who fought alongside the British in America. Included among the 900 captured Hessians was a group of oboists, the favorite entertainment of Colonel Johann Rall, who was mortally wounded at Trenton. Accompanied by regimental drummers, these 10 oboists marched into Philadelphia as prisoners of war following the battle. Less than a year later, the Continental Congress hired these musicians to provide entertainment for the first anniversary of the Declaration of Independence on July 4, 1777. John Adams wrote that the festivities included “fine music from the band of Hessians taken at Trenton.” Some of these Hessian musicians returned to Hesse-Cassel following the end of the Revolutionary War, but some of them stayed. One of them, Philipp Pfeil, moved to Philadelphia and became “Philip Phile, music master,” later composing the march we know today as the ceremonial march of the Vice President of the United States.

Health and Safety Note
Guests attending this program in person will be required to show proof of full COVID vaccination upon entry. “Full vaccination” means that the event date is at least 14 days after the guest’s final COVID-19 vaccine dose. Original CDC vaccination cards, photos, or electronic copies of the card are all acceptable forms of documentation. Proof of a negative COVID test will not be accepted. For ticket holders unable to provide proof of vaccination, a livestream link be made available. Masks will be required unless eating and drinking. Please contact the front desk at 215.253.6731 with any questions.

About Tempesta di Mare
Tempesta di Mare is Philadelphia’s premier baroque orchestra and chamber ensemble. With every performance, Tempesta creates a sense of discovery. From innovative programming that has resulted in over 35 modern world premieres of lost and forgotten baroque masterpieces, to the ensemble’s signature interpretive approach evoking drama and emotion – their performances are true to their name: “storm at sea.” For more information, visit www.tempestadimare.org.